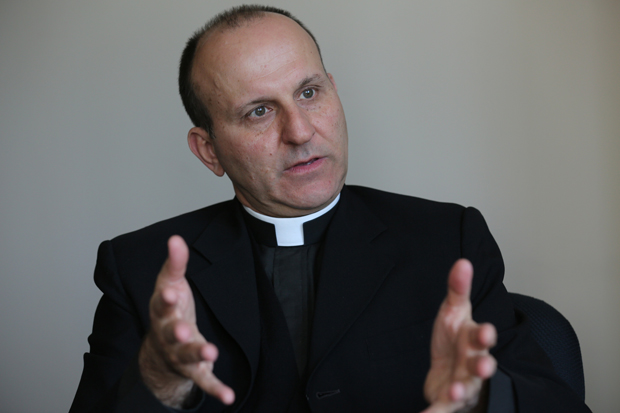 WASHINGTON (CNS) — The Catholic Church not only needs to provide pastoral care for those with same-sex attraction but it should also make its teaching “accessible, understandable and compelling for people,” said the director of a church apostolate that ministers to homosexuals.

Father Paul Check, director of Courage for the past eight years, said Catholics with same-sex attraction would be also more likely to “understand what the church teaches if it became more plain to them that they have a place in the church.”

He aims to get that message across through the work of his apostolate, which particularly focuses on providing clergy training, but he said the message still needs to “get to the ground to people who need it.”

The priest, who considers himself “an advocate for an underserved population,” said the church’s teachings on chastity and contraception are not well understood, and added that they are “all part of one tapestry and they include the question, obviously, of homosexuality.”

One way to get this across will be through an international conference focusing on the church’s ministry to homosexuals. The conference, taking place near Detroit this August, is a lead-in to the World Meeting of Families in Philadelphia in September and the world Synod of Bishops on the family at the Vatican in October.

It aims to help those in pastoral care ministries gain a better understanding of the church’s teaching on homosexuality as well as insight on how to put into practice the U.S. bishops’ 2006 document “Ministry to Persons With a Homosexual Inclination: Guidelines for Pastoral Care,” said Father Check.

He said the theme of the Aug. 10-12 gathering is Christian friendship and the importance of building relationships.

The event, sponsored by Courage International, Our Sunday Visitor and the Archdiocese of Detroit, will feature about 30 national and local speakers and will include Courage members “who will tell their stories,” the priest told Catholic News Service in a May 22 interview in Washington.

Father Check, a diocesan priest from Bridgeport, Connecticut, said the conference will answer some of the questions posed in the “lineamenta,” or outline, for the Oct. 4-25 synod on the family at the Vatican, particularly about the church’s response to homosexuality.

Some of those questions included: “How can the Christian community give pastoral attention to families with persons with homosexual tendencies?” and “What are the responses that, in light of cultural sensitivities, are considered to be most appropriate?”

Last year he said Courage took a small step in spreading the church’s message about homosexuality through a documentary movie, “Desire of the Everlasting Hills,” which tells the stories of three people who transitioned from homosexual lifestyles to chastity in accordance with the church’s teachings.

“It’s an easy introduction to the solicitude and care the church has for people,” Father Check said, adding that the hour-long film “doesn’t sound like sterile teaching from the catechism but a lived reality.”

He pointed out that many people do not even know Courage exists, unless they “Google ‘Catholic Church and homosexuality'” and when people “find us eventually” they often say: “We never knew the church had something” like this.

Courage chapters, which currently number about 100, are support groups where people meet confidentially and build relationships. “Isolation is really one of the more difficult problems our members face,” the priest said.

He said word of this apostolate needs to appear in parish bulletins, announcements, pamphlets in church vestibules and should be mentioned in diocesan newspapers and even in confessionals.

Father Check said this ministry has “changed my priesthood considerably.”

He said as a teacher of moral theology and sexual ethics, “this is already my field,” but he has been particularly impacted by “sitting down with men and women for whom this is part of their life.”

“The blessing for me is to get to see the nobility of the human spirit and the efficacy of grace in a lot of lives,” he said before adding: “but there are many challenges, I don’t want to undervalue that.”

NEXT: Notre Dame U. professor sued for child sexual abuse