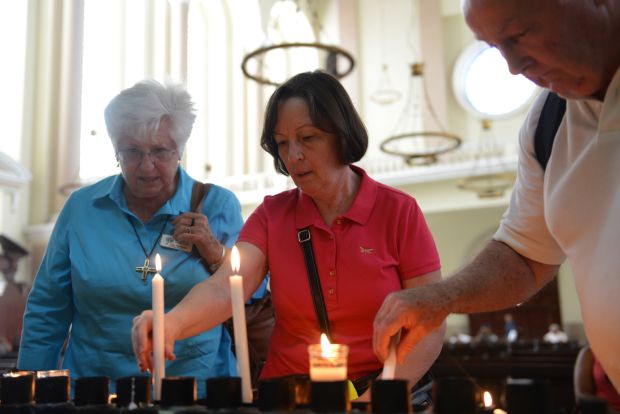 U.S. pilgrims light candles in the cathedral in San Salvador May 21, two days before the beatification of Archbishop Oscar Romero. Archbishop Romero was shot by unidentified gunmen as he celebrated Mass March 24, 1980. (CNS photo/Lissette Lemus)

SAN SALVADOR, El Salvador — The use of modern media to move and consume news of the beatification of Oscar Romero might be a fitting tribute to the Salvadoran archbishop.

Though he lived simply, among the few remaining belongings left in a room where he lived as archbishop of San Salvador, visitors will notice a tape recorder. Archbishop Romero kept an audio diary — high technology in those days, and an instrument to transmit the Gospel and his message of peace to a mass audience.

In an age of smartphones and tablets, anyone can pull up his homilies — recorded on cassette tapes and now digitized — and listen to them in a variety of platforms, including YouTube, which provides audio and video of Archbishop Romero, who was gunned down March 24, 1980, while celebrating Mass.

Many have come to know distinctly his voice though they’ve never met him. But they’ve heard over and over the last homily in which he pleaded with soldiers to stop killing innocent civilians. Interested digital pilgrims can even visit the room where he lived without stepping foot in El Salvador, thanks to hundreds of free photos and videos of it found online.

Since the day his May 23 canonization was announced, a Twitter community of Archbishop Romero devotees, as well as detractors, lit up. Detractors used the event to attack him online. But those like Elsa Flores Portillo, of Washington, is one of the digital devotees of Archbishop Romero. She looked to Twitter and Facebook for the latest news on the beatification.

“It’s a way of being connected without much effort,” she said. “And it allows us to follow the coverage of everything freely. Thanks to a post on Facebook, I found an article that spoke of [Archbishop Romero’s] relics.”

If Archbishop Romero’s Twitter followers constitute a cybercommunity, then Carlos Colorado, known as “polycarpio” or by his @SuperMartyrio Twitter handle, is their mayor. Marina Marta Claros Ramos, of the Pontifical Mission Societies of El Salvador, said she has followed the latest developments of the beatification via @SuperMartyrio or by reading Colorado’s Super Martyrio blog.

While Salvadorans in the past were forced for years to hide, bury or burn photos of Archbishop Romero, fearing that they would be labeled communists, or rebel sympathizers during the country’s 12-year-long civil war, some younger Salvadorans and many pilgrims are taking “selfies” with the former archbishop of San Salvador, Claros said, when they see big murals or posters of the late prelate in the background.

Some older Salvadorans have brought old photos out of hiding and are proudly displaying them, thanks to local newspapers that have digitized the photos and are running them on their websites.

There’s talk that the young don’t care, Claros said, but she has been surprised with the quantity of digital content the beatification has generated and in various forms.

Days before the big event, news organizations tested drones over the square of the Divine Savior of the World, the site of the beatification in San Salvador, to prepare for a live stream of the ceremony and to capture aerial photos to send out in real time.

The Archdiocese of San Salvador, sensing a surge of international interest and also pilgrims looking for digital information online for the event, instituted the beatificacionromero.org social media office in preparation for the ceremony and has sent out messages using Instagram, Facebook, Twitter, Flickr and YouTube.

Karla Orozco, of beatificacionromero.org, said four staffers and other young volunteers have worked tirelessly on putting up content on the website, such as prayer cards that can be downloaded, video, photos, downloadable posters of the beatification, maps of the site, and other free material. The office instituted hashtags, in English and Spanish, educating digital natives interested in the beatification months before the event.

Thanks to those efforts, those like Flores, a native of El Salvador who couldn’t leave her home in Washington to attend the ceremony, could still be part of a great historic moment.

“Social networks break the barrier of distance and help me to live this great event as if I were in El Salvador,” she said. “Through social networks, we can unite as God’s people to celebrate the life of a witness of the love of God, the life of (Archbishop) Romero.”

NEXT: Following Christ, serving others means being missionary, pope writes