Archbishop Romero was motivated by Gospel, not politics, cardinal says 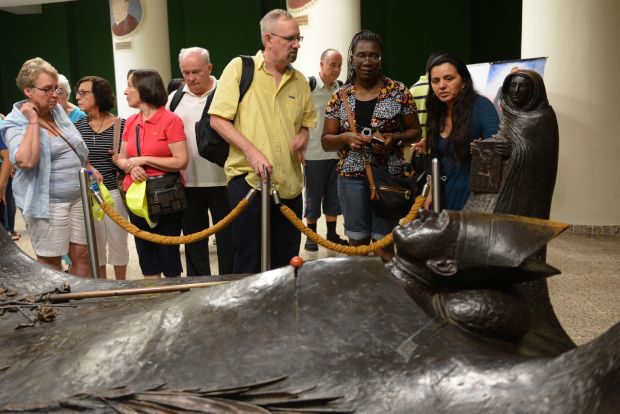 U.S. pilgrims stand near the tomb of Archbishop Oscar Romero in the cathedral in San Salvador May 21, two days before the beatification of the archbishop, who was shot by unidentified gunmen as he celebrated Mass March 24, 1980. (CNS photo/Lissette Lemus)

VATICAN CITY (CNS) — Salvadoran Archbishop Oscar Romero’s preferential love for the poor “was not ideological, but evangelical,” said Cardinal Angelo Amato, the prefect of the Congregation for Saints’ Causes.

The cardinal, who was delegated by Pope Francis to preside over Archbishop Romero’s beatification May 23 in San Salvador, told Vatican Radio the martyred archbishop “was, in fact, a good priest and a wise bishop, but most of all, he was a virtuous man.”

“He loved Jesus and adored him in the Eucharist, he loved the church, he venerated the Blessed Virgin Mary and he loved his people,” Cardinal Amato said.

“His martyrdom was not an improvisation,” the cardinal said, “but had a long preparation,” which went all the way back to Archbishop Romero’s preparation for priestly ordination in 1942 when he consecrated his very life to God.

The Vatican Radio reporter asked about what many people refer to as Archbishop Romero’s “conversion” from being rather quiet and focused on internal church affairs to being more outspoken in defense of the poor and the victims of his country’s military dictatorship.

“A change in his life of being a meek and almost timid pastor” was the murder in 1977 of Salvadoran Jesuit Father Rutilio Grande, who had left his university position to be a “pastor of the farmworkers, the oppressed and emarginated,” Cardinal Amato said. The murder “was the event that touched the heart of Archbishop Romero, who mourned his priest like a mother would her own child.”

While his public words became much sharper and more focused on the lived reality of his people, he said, “his words were not an incitement to hatred and revenge, but were the heartfelt exhortation of a father to his divided children, calling them to love, forgiveness and agreement.”

For Cardinal Amato, Pope Francis summarized “the priestly and pastoral identity of Romero when he called him ‘bishop and martyr, pastor according to the heart of Christ, evangelizer and father of the poor, heroic witness of the kingdom of God, the kingdom of justice, brotherhood and peace.'”

Archbishop Romero, he said, “is another bright star shining in the American spiritual firmament.”

Citing saints from North, Central and South America, he said there are “many American saints and martyrs who pray to the Lord for their brothers and sisters still on the earthly pilgrimage. Blessed Oscar Romero belongs to this impetuous wind of holiness that still blows over the American continent, a land of love and fidelity to the good news of the Gospel.”

NEXT: Abundance of media connects people far and wide to Romero beatification