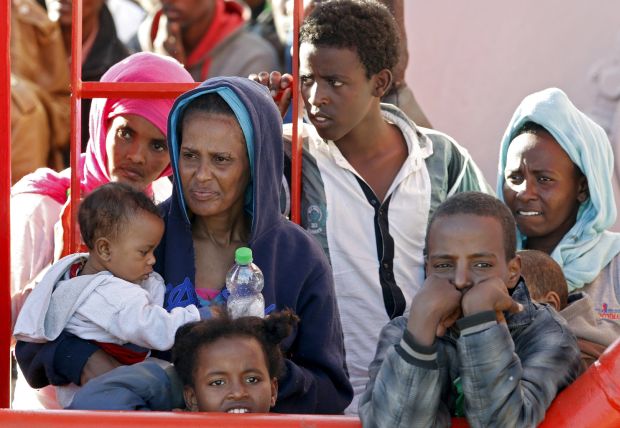 Migrants wait to disembark from a tug boat in the Sicilian harbor of Pozzallo May 4. More than 3,600 migrants were rescued at sea in 17 different operations in just one day in early May, according to the Italian coast guard. (CNS photo/Antonio Parrinello, Reuters)

OXFORD, England (CNS) — As the European Union announced tough measures to curb the flow of migrants and refugees across the Mediterranean Sea, Catholic aid groups urged a more humanitarian response.

“We’re disappointed by the EU’s proposals — although changes have been promised to stop people dying on our borders, these policies are insufficient,” said Karolina Babicka, an advocacy officer with Caritas Europe. “Catholic agencies like ours have warned the EU for years about this crisis, but its leaders haven’t responded seriously.”

She told Catholic News Service that EU governments were “at least partly responsible” for conditions in Libya and other countries, because of past interventions, and should be doing more to deter refugee flights by promoting stable development.

More than 3,600 migrants were rescued at sea in 17 different operations in just one day in early May, according to the Italian coast guard. On April 20, Caritas reported more than 1,500 people had drowned in the Mediterranean so far this year. The number of refugees and migrants attempting the crossing to Europe have increased sharply with growing violence in the Middle East and North Africa.

On April 23, the European Union announced measures to deter boat refugees. It said it would strengthen sea patrols by its Frontex border agency and destroy human traffickers’ boats, as well as increase the speed at which it processed asylum applications. It also announced a pilot project on migrant resettlement.

But Archbishop Silvano Tomasi, the Vatican’s representative at the United Nations in Geneva, said priority should be given to “rescuing threatened human life,” rather than “economic questions or immediate state interests.”

“Europe needs to go beyond the normal methods of control,” Archbishop Tomasi was quoted as saying by France’s Catholic La Croix April 24. “If the European Council doesn’t deal with this problem in a radically new way, there’ll be a risk of merely leaving things as they are.”

The Brussels-based Conference of European Justice and Peace Commissions said European policy should “prioritize life-protecting and migrants’ human rights” rather than “controls, vigilance and border blockades,” and called on the United Nations to act if Europe failed to stop the mass deaths.

Babicka told CNS that tripling Frontex’s budget was “a small step in the right direction.” However, she added that the border agency had no mandate to conduct search-and-rescue operations and said Catholic representatives had been “surprised and shocked” by the EU’s proposal to destroy smugglers’ boats.

“If you start destroying boats, as the EU has tried to do against pirates off Somalia, it’s likely you’ll destroy the people in them too, and this raises legal and moral questions,” said Babicka. “The smugglers are there because there’s a demand — from desperate people who’ve no other way to reach safety. If you sink them, other even more dangerous routes will be found instead.”

An Amnesty International official also called for a search-and-rescue operation.

“Merchant vessels and national coast guards have again responded valiantly to the immense and growing challenge of saving the lives of vulnerable migrants, refugees and asylum seekers off Europe’s southern shores. But that’s far from enough in the face of this growing humanitarian crisis,” said Gauri van Gulik, Amnesty’s deputy director for Europe and Central Asia. “Without a European search-and-rescue operation, the European Union’s approach looks increasingly haphazard and negligent.”

Last October, Catholic bishops and aid agencies condemned a European Union decision to wind up a search-and-rescue operation launched in 2013 and replace it by a more limited border operation run by Frontex.

The World Council of Churches has urged Europe to take “collective responsibility,” rather than leaving the problem to border services in Greece, Italy and Malta, and to recognize the need to tackle “poverty, social instability and conflicts” in the migrants’ countries of origin.

Meanwhile, the president of the German bishops’ conference said the drownings represented “a defeat for everything that makes the European Union a community of values,” and called on the EU to reinstate its search-and-rescue operation and stop treating the saving of lives as a “mere political issue.”

“It is clear the EU attracts refugees, and traffickers exploit the willingness of EU border control to rescue their victims — and it is regrettable that sufficient action isn’t taken in countries of origin to counter the reasons which make them feel they must leave,” said Cardinal Reinhard Marx, who also heads the Commission of the Bishops’ Conferences of the European Community.

“But all of this does not justify ignoring the humanitarian tragedy unfolding in the Mediterranean. Politicians in Europe have often deplored the deaths of refugees without drawing conclusions. This tragedy is now pushing European countries to take drastic measures. Europe’s response will be a litmus test for European values.”

Babicka said church agencies were urging humanitarian visas for refugees from Syria and Libya, as well as legal “humanitarian channels” for labor migrants and a better system for family reunifications.

She added that Catholic groups had found a strong ally in Pope Francis, who warned in a November address to the European Parliament against allowing the Mediterranean “to become a vast cemetery.”

“How we treat migrants and refugees reflects the state of basic rights in the EU,” Babicka said. “But the problem is worsening and major states aren’t doing enough to combat it and uphold the Christian values which provide the foundation for EU values.”

NEXT: Issues of marriage, sexuality should not threaten ecumenism, says pope