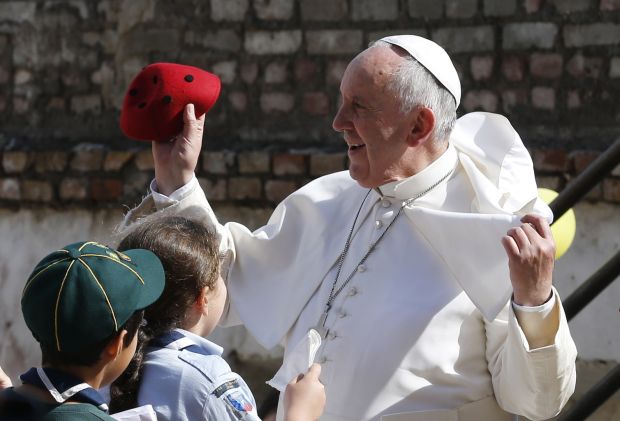 Pope Francis exchanges hats briefly with a Scout while visiting Queen of Peace Parish in Ostia on the outskirts of Rome May 3. (CNS photo/Paul Haring)

ROME (CNS) — Before celebrating Mass in a parish in Ostia, Rome’s seaside community, Pope Francis stopped to see two Little Sisters of Jesus who live in a trailer at an amusement park, sharing their lives and faith with the carnival workers.

The Vatican provided no more details of the visit to “Luna Park di Ostia,” but the fact that the carnival grounds are near the parish came up during his conversation with the children and youths of Ostia’s Mary, Queen of Peace parish.

Asked where joy comes from, Pope Francis told the young people, “It can’t be bought at the market” and “you don’t get it because you won a game at Luna Park. No. Joy is a gift” and is something people should pray for.

“If I am sad, if I’m down, if I’m lazy and don’t know what to do, I must ask the Holy Spirit and he will give me joy because it is a gift of the Spirit,” the pope said.

Having the gift of joy, he said, does not mean one will never have problems and never be tempted to do something wrong.

“In life people make all kinds of wrong choices, but as I once heard in a song,” he said, quoting, “‘In the art of climbing, the most important thing isn’t not to fall, but not to remain fallen.’ We all fall. We all make mistakes and even sin. All of us. But what is witness? It’s to get up with the grace of God.”

Pope Francis also met with the parish’s oldest members and those with health problems, urging them to share their wisdom with the younger parishioners and to pray for him because, he said with a smile, “I am a bit old, I’m a bit sick — but not very.”

Meeting with dozens of parents whose children have been baptized in the past year, Pope Francis pleaded with them not to say “arrivederci” until it is time for the children’s first Communion.

“It’s important to walk with your children on the path of faith and be close to the parish,” he said. “I don’t know how those of you with five (children) do it, but always be close to the Lord who has given faith to these babies.”

In his homily during an evening Mass in the parish, like he had done earlier during his midday “Regina Coeli” address at the Vatican, Pope Francis focused on the words in the day’s reading from the Gospel of John, “I am the vine, you are the branches.”

“A branch that is not united to the vine dies, it does not give fruit, it is useful only for making a fire,” the pope said at the Mass. Instead, “remaining in Jesus means being united to him in order to receive life, love and the Holy Spirit from him.”

“Abiding in Jesus — and this is the most difficult thing of all — means doing what Jesus did, having the same attitude Jesus had. But when we speak ill of others, when we gossip, we aren’t remaining in Jesus. When we are liars we don’t remain in him, we’ve done evil,” the pope said. “Remaining in Jesus is doing what he did: healing the sick, helping the poor, having joy in the Holy Spirit.”

Before reciting the “Regina Coeli” prayer at noon with visitors in St. Peter’s Square, the pope said a Christian, like a branch on a vine, is not self-sufficient, “but depends totally on the vine, which is the source of its life.”

Remaining part of the vine, he said, requires “friendship with the Lord” through prayer, reading the Bible and receiving the sacraments, especially the Eucharist and reconciliation.

“If one is intimately united to Jesus, he or she will enjoy the gifts of the Holy Spirit, which — as St. Paul says — are ‘love, joy, peace, patience, kindness, generosity, faithfulness, gentleness and self-control,'” he said. All of those gifts, he added, “bring such good for your neighbors and your society.”