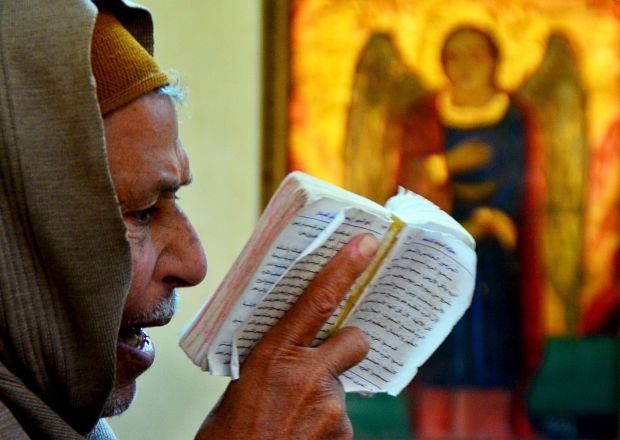 The father of a man who was killed by Islamic State militants in Libya earlier this year attends a service in the Virgin Mary Church near Cairo May 3. (CNS photo/Reuters)

OXFORD, England (CNS) — Egypt’s Catholic Church has pledged respect for the country’s justice authorities after a deposed Islamist president was sentenced to death for alleged complicity in a planned jail break.

“After long deliberations, the Catholic Church has declared itself against the death penalty in general,” said Father Hani Bakhoum Kiroulos, patriarchal vicar of the Coptic Catholic Church.

“But Egypt is an Islamic country which, like the United States, uses this sentence. Far from intervening in particular judgments, the Catholic Church must respect the country’s laws and judicial system.”

The priest spoke as protests continued against the May 16 decision by a Cairo court sentenced former President Mohammed Morsi and dozens of others.

In a May 21 interview with Catholic News Service, Father Kiroulos said the death sentences were not final and could still be appealed, adding that they also had to be reviewed by Egypt’s highest religious authority, the Muslim grand mufti.

“Most such sentences have both supporters and opponents, so I can’t say how popular this one was,” said Father Kiroulos. “Nor is anyone in the Catholic Church competent to judge whether it was just or not. All we can say is it’s had quite an impact on the country.”

“The problem here isn’t between Christians and Muslims, but between militant fundamentalists and the rest of Egypt.”

Morsi, who is already serving a 20-year term for ordering the arrest and torture of protesters, was sentenced to death with 104 supporters, including alleged members of the Palestinian Hamas group, after being accused of plotting with foreign militants to free Islamists from prison.

The judgment was deplored by Amnesty International, which said the death penalty was being used “to purge the political opposition,” and it triggered violent protests by backers of Morsi’s now-outlawed Muslim Brotherhood movement.

However, a Coptic Catholic bishop said the death sentence appeared to have popular support, adding that the Muslim Brotherhood, when in power, had itself demanded death for Egypt’s previous president, Hosni Mubarak.

“The church respects the independence of the judiciary but believes life is an inviolable right,” Bishop Kyrillos William of Assiut told the Vatican’s Fides news agency May 18.

“I could reach out and touch the difference between the Christian approach, which includes the criteria of mercy and compassion, and a mindset I would call ‘Old Testament,’ where there is only the logic of an eye for an eye.”

The much larger Coptic Orthodox Church makes up at least a tenth of Egypt’s population of 82.5 million.

Father Kiroulos said Egypt remained at a “critical stage,” amid signs of a new power struggle between the president and parliament.

However, he predicted the latest death sentences would not negatively affect Christian-Muslim relations in the country, where Catholics viewed themselves as a “full part of the nation.”

“The problem here isn’t between Christians and Muslims, but between militant fundamentalists and the rest of Egypt,” the priest added.

“Certainly, the economic situation is better now, and security has improved. But the Catholic Church is still hoping that all citizens will be treated in the same way, with equal rights under the law.”

At least 1,200 people, including other senior Muslim Brotherhood members, have also been sentenced to death in mass trials since 2013, although none have been executed so far, according to U.N. monitors.