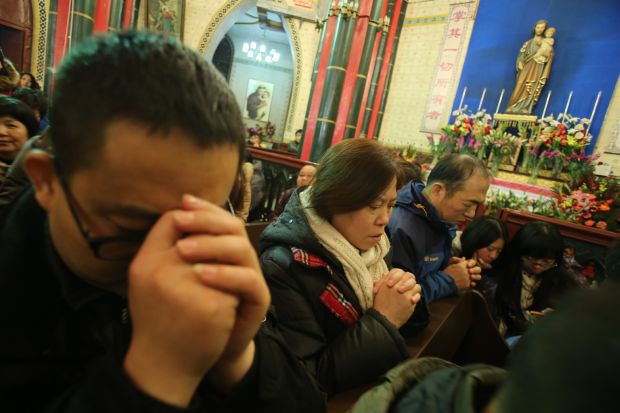 Chinese Catholics pray during a 2014 Mass in Beijing. Pope Francis asked Catholics worldwide to show solidarity through their prayers for Catholics in China and for persecuted Christians over the Pentecost weekend. (CNS photo/Wu Hong, EPA)

VATICAN CITY (CNS) — Pope Francis asked Catholics worldwide to show solidarity through their prayers for Catholics in China and for persecuted Christians over the Pentecost weekend.

The World Day of Prayer for the Church in China is observed each year on the feast of Our Lady Help of Christians, May 24, which this year falls on Pentecost.

Catholics in China invoke Mary, venerated at the Marian Shrine of Sheshan, near Shanghai, each May 24, the pope noted.

“We, too, will ask Mary to help Catholics in China always to be credible witnesses of this merciful love among their fellow citizens and to live spiritually united to the rock of Peter, upon whom the church is built,” he said.

The pope also underlined a prayer initiative of the Italian bishops’ conference inviting all Italian dioceses to pray for persecuted Christians on the vigil of Pentecost.

The vigil is intended to “remember the many brothers and sisters exiled or killed for the sole reason that they are Christian,” said the pope. “They are martyrs.”

The pope expressed his hope that the prayer vigil will “increase awareness” of the “drama of persecuted Christians in our day” and of religious freedom as an “inalienable human right,” as well as to “bring an end to this unacceptable crime.”

NEXT: Church will respect death sentence for ex-Egyptian president