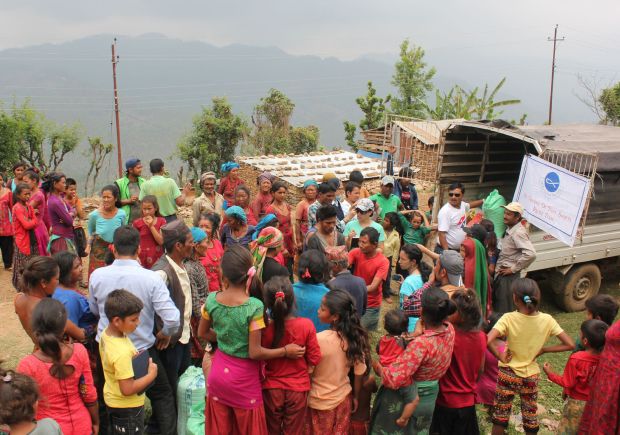 Relief workers from the St. Vincent de Paul Society of Assumption Parish in Lalitpur, Nepal, distribute food items and tents May 9 for Hindus and Muslims on top of Baretol mountain. The village was affected by the magnitude-7.3 earthquake April 25. (CNS photo/Anto Akkara)

NAMJUNG, Nepal (CNS) — “Sir, because of luck, we all survived. But, we may die of hunger,” Mithuram Pariyar said when a church relief team arrived after a four-hour drive from Kathmandu.

“Nobody (relief worker) has set foot here in two weeks,” said Pariyar, summing up the travails of 29 families.

It was this neglect that prompted the St. Vincent de Paul Society of Assumption Parish in Lalitpur to carry nearly 1.5 tons of rice and other food items along with shelter material to the mountain May 9. The route included five miles of a rocky and slushy steep climb that would test anyone’s driving skills.

“It was painful for us to see helicopters dropping food on other (nearby) mountains regularly. But nothing (no food) was dropped here,” said Suba Pariyar, holding the arm of his mentally challenged son.

Augustine Lepcha, coordinator of the relief team at Assumption Parish, told Catholic News Service the group decided to take supplies to the village “when we heard of the situation through our contacts. We want to help the most-needy people.”

Two-and-a-half-hours after their arrival, as the relief workers bid farewell, the 29 Hindu and Muslim families living in the open and in cattle sheds were in a cheerful mood.

“We are racing against time to cover at least 15,000 families before the rains come,” Hardy told CNS. “The relief has to reach the people in the remote mountains before the monsoon sets in.

“Once the rains come (in early June), no vehicle could go up these mountains,” Hardy reiterated.

She spoke while awaiting tractors carrying relief material for distribution among 360 families who had converged on the Namjung hills. After hours of waiting on the hill — a two-hour mountain drive from Gorkha, where the CRS has its operational base — the CRS relief distribution team received frustrating news. The tractors carrying tarpaulin and woolen blankets to be distributed among the families was stuck along the path due to the previous night’s rain.

Only a couple of tractors reached the mountaintop, and the CRS team had to slow down people lining up for relief distribution. Staffers called them by name according to the beneficiary list prepared by an assessment team three days earlier.

“The tractor carrying tarpaulins is yet to come. It is most crucial for the people. We have to wait,” Farhad Ali, a Muslim coordinating the CRS relief distribution on the mountaintop, told CNS when asked about the delay.

“All the houses in this village are unlivable. Some have collapsed and others will collapse when monsoon comes, if not in tremors. We are living in the open,” said villager Bhuminand Dhahal.

“I built this house with my savings from living in Delhi for 20 years. All that has gone down now. We are happy that at least this group (CRS) has come here and is taking serious interest in helping us,” said Dhahal.

Unlike the frustration in the Namjung hills, at the Jan Sakti School center, four miles down the mountain path, brisk relief distribution was in progress. Relief kits of plastic mats, tarps, buckets and hygiene kits were handed over in rapid succession, while dozens sat patiently on steps resembling a gallery, awaiting their turn.