Families are first victims of violence and poverty, pope says 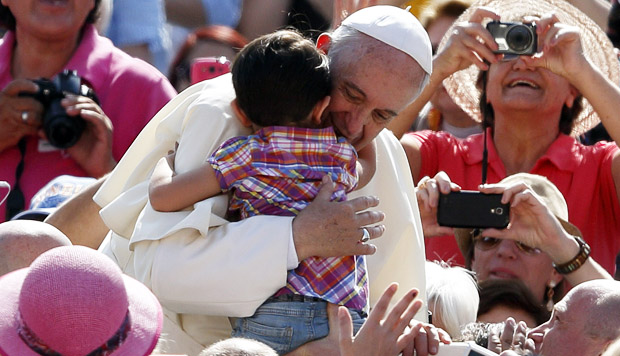 Pope Francis hugs a child as he arrives at the general audience in St. Peter's Square at the Vatican May 13. (CNS photo/Paul Haring)

VATICAN CITY (CNS) — Families are the first victims wherever there is conflict or poverty, but they also are the best place for teaching peace and reconciliation, Pope Francis told bishops of the Central African Republic.

The bishops were making their “ad limina” visits to the Vatican to report on the situations in their dioceses in meetings with the pope and Vatican officials.

Families “are the first victims of violence and they are too often destabilized or destroyed when one of the spouses moves away” because of “poverty, discord or separation,” Pope Francis told the bishops May 15.

It is critical that families are “protected and defended” and helped to become schools of the culture of “forgiveness, peace and reconciliation,” which the Central African Republic needs so much, he said.

Put pastoral attention on the family, Pope Francis told the bishops, and “do not be discouraged facing the resistance caused by cultural traditions, human weakness or the new ideological colonization that is spreading everywhere.”

He also encouraged the bishops to have an “open door” policy with their priests and treat them with mercy, especially when they fail in some way.

Sanctions are “sometimes certainly necessary, but they must be the last resort,” he said.

Pope Francis also recognized the “difficult and painful” situation in the country, which has emerged from a two-year-long intense conflict between Muslim and Christian armed groups that has left thousands of people dead and a million more displaced.

Where there is violence and hatred, Christians “are called to respond with forgiveness and love,” the pope said. Situations where that is “not always the case,” he said, show that “the Gospel has not yet penetrated sufficiently deep into the hearts of the people everywhere.”

NEXT: Church workers reach out to quake victims in remote Himalayan villages