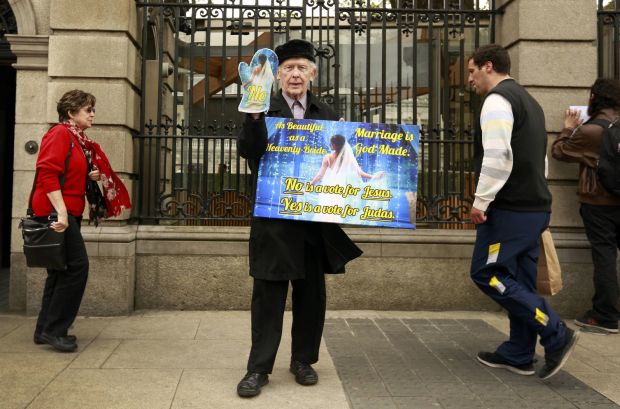 A man opposed to same-sex marriage stands outside the Irish parliament in Dublin May 20.(CNS photo/Cathal McNaughton, Reuters) 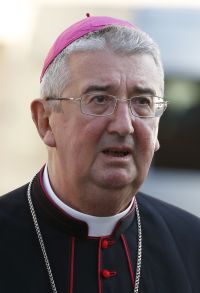 Ireland was the first country in the world to put same-sex marriage to a popular vote and the May 22 poll was backed by 62 percent of the population. Same-sex marriage is now a constitutional right in Ireland.

“I think really that the church needs to do a reality check, a reality check right across the board, to look at the things it’s doing well, to look at the areas where we really have to start and say, ‘Look, have we drifted away completely from young people?'” he told state broadcaster RTE as the result became clear.

He said the referendum result was “an overwhelming vote in one direction,” and he appreciated how gay men and lesbians felt after the endorsement of same-sex marriage — “that they feel this is something which is enriching the way they live,” he said.

Cardinal Pietro Parolin, Vatican secretary of state, said the referendum’s outcome represented not only “a defeat for Christian principles, but a defeat for humanity.”

“I was very saddened by this result. The church must take into account this situation but in the sense of strengthening its efforts in evangelization,” he said in Rome May 26 in response to reporters’ questions.

German Cardinal Walter Kasper said the referendum is “emblematic” of today’s postmodern belief that “everything is equal,” which is in contrast to church doctrine.

“We cannot accept putting (such unions) on the same level with marriage,” he told the Italian daily Corriere della Sera May 27.

The church needs to find new ways and a “new language” to express its fundamental teachings about love, marriage, sexuality and the equal dignity and reciprocal “diversity of man and woman in the order of creation,” he said.

“It’s necessary to be careful about not using expressions that can sound offensive without, however, hiding the truth,” Cardinal Kasper said.

But marriage between a man and a woman is “the fundamental cell of society, the source of life for the future,” and other forms of unions and surrogate pregnancies risk having “enormous consequences,” especially on children, he said.

Regarding the fact that many Catholics in Ireland voted in favor of the same-sex marriage law, the cardinal said it shows the church has been “too quiet on these issues. Now is the time to discuss them.”

The Gospel and church teaching are clear, he said, “but traditional expressions” and explanations “evidently no longer reach people’s hearts and minds.”

Archbishop Martin described the result as a “social revolution.” 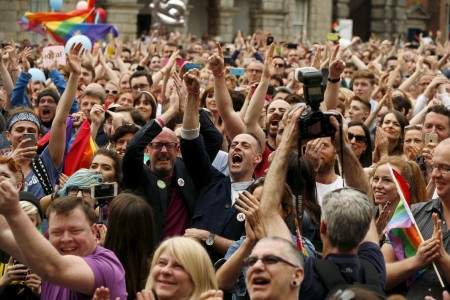 “It’s very clear that if this referendum is an affirmation of the views of young people, then the church has a huge task in front of it to find the language to be able to talk to and to get its message across to young people, not just on this issue, but in general.”

Archbishop Martin said it was important that the church must not move into denial of the realities.

“We won’t begin again with a sense of renewal by simply denying,” he said.

Referring to the high turnout of younger voters, the archbishop said “most of these young people who voted ‘yes’ are products of our Catholic schools for 12 years … there’s a big challenge there to see how we get across the message of the church. … We need to sit down and say ‘Are we reaching out at all to young people?’… We’re becoming a church of the like-minded, and a sort of a safe space for the like-minded,” he warned.

However, he insisted, “that doesn’t mean that we renounce our teaching on fundamental values on marriage and the family. Nor does it mean that we dig into the trenches.

“We need to find … a new language which is fundamentally ours, that speaks to, is understood and becomes appreciated by others,” the archbishop said.

Bishop Kevin Doran of Elphin, who had been a leading voice in the “no” campaign, described the outcome as “clear and decisive.”

“While I am personally disappointed by the result, I very much welcome the fact that so many people voted,” Bishop Doran said.

“It seems that many people voted ‘yes’ as a way of showing their acceptance and their love for friends and family members who are gay. Large numbers obviously believed that they could vote ‘yes’ without in any way undermining marriage. While I do not share their belief, I understand their reason for celebrating, and I do respect their spirit of solidarity,” Bishop Doran said.

He also paid tribute to the “no” campaign.

“I want to acknowledge the generosity of so many people who worked so hard to ensure that the minority point of view was heard,” he said. “They have every reason to be proud of what they achieved with such limited resources.”

David Quinn, who as director of the pro-marriage think-tank the Iona Institute was the de facto leader of the “no” campaign, pointed to the fact that one in three citizens decided to vote “no” despite the fact that all political parties were calling for a “yes” vote.

Turnout was significantly higher than previous referendums, and most commentators highlight the large number of young voters as a key reason why the referendum passed.

The government plans to have legislation prepared by this summer, with the first same-sex marriages expected to take place in September.

NEXT: South Sudan’s church leaders: Much of country without governance