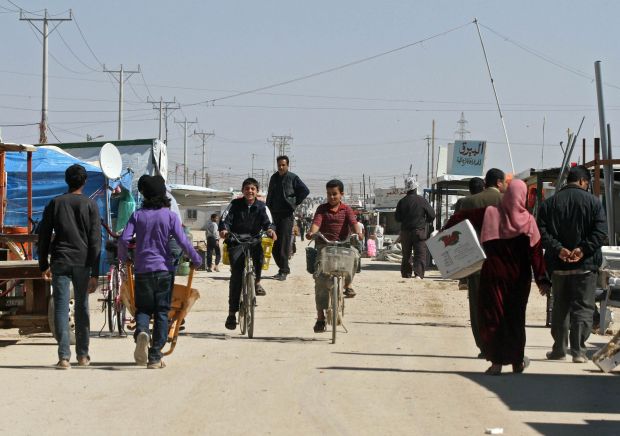 With no end in sight to the Syrian conflict, now in its fifth year, officials are calling the situation critical. So far this year, Jordan has received only 7.2 percent of $2.9 billion needed for services to Syrian refugees and host communities.

Planning Minister Imad Fakhoury urged the international community to do its part, warning the country may have to restrict entry to Syrians if the crisis increases unemployment and poverty among its own citizens.

Syrian refugees now make up 20 percent of the kingdom’s population, Fakhoury said. However, only about 630,000 Syrians are registered with the U.N. refugee agency, he told reporters in Amman April 30.

“You can count on Jordan, but please don’t leave us alone in that effort,” Fakhoury said at the end of a recent visit by six U.N. agencies to view the situation on the ground.

“If we are left alone, then we will have to make very difficult decisions about our national security with a priority to our citizens, and the world can’t blame us,” he added.

Today, Jordan is the world’s third-largest host of refugees, including some 208,000 Iraqis in addition to Syrians, Palestinians, Yemenis, Libyans, Sudanese and Somalis.

In March, the Assembly of the Catholic Ordinaries of the Holy Land urged the international community to “intervene in alleviating the desolation” of Syrian refugees in their “desperate situation.” It also expressed concern over cuts in support provided by humanitarian groups, including the international Catholic aid agency, Caritas, due to a lack of funds.

“Our projection is around $17 million and, for the first quarter of the year, we have received about 50 percent of this amount,” Omar Abawi, emergency program manager of Caritas Jordan, told Catholic News Service.

“But compared with 2014 and past years, it’s a real gap because it was more than 50 percent” at this time, said Abawi. “Funding for health services have yet been received as planned.”

As of February, Caritas Jordan had helped more than 91,000 Syrian refugee households, the equivalent of nearly 452,000 individuals, who had registered with the Catholic relief organization since the start of the Syrian conflict in 2011. Caritas works solely among the majority of Syrian refugees who live in Jordanian communities and not those sheltering in U.N. camps where they already receive U.N. assistance. There are numerous other church-related agencies assisting Syrian refugees in Jordan, both in the community and in the camps.

Such cuts to services by the U.N. and charities include reducing the amounts provided for food assistance vouchers or eliminating them entirely. Also, refugees must now pay for health care that was once provided free to Syrian refugees by the Jordanian government.

U.N. agencies have limited aid to the neediest among the refugees, leaving many without basic subsistence.

“About four months ago, the U.N. refugee agency stopped issuing me and my family of five food coupons,” said Samira, a Syrian refugee from the southern town of Daraa.

Sitting cross-legged on foam cushions lining a floor where her family sleeps and eats, Samira told CNS that she has been trying to scrape together some living expenses from part-time work as a cleaner in Amman.

Samira, who only gave her first name for fear of retribution to family still in Syria, is also suffering from a painful kidney stone, but she has been unable to go to a doctor because the $60 treatment cost is prohibitive.

“In the past, Syrians got free medical help, but that is no longer the case,” she said, her dark eyes full of concern because, she said, one of her sons is suffering from a far more serious medical problem.

Although some 80 percent Syrian refugees live outside U.N. camps and in Jordanian communities, more are moving into the camps. There, they no longer have to pay rent, and they have access to some free medical services. Still, others have gone back to war-ravaged Syria, despite the enormous danger as a result of ongoing fighting.

“They returned because it’s difficult to keep living here. They got fed up and tired,” said Abu Omar, a Syrian refugee in Jordan’s largest camp at Zaatari. “The services aren’t good. They felt it’s better to die in Syria than here, at least to return to our land.”

That said, there are still dozens of Syrian refugees streaming into Jordan weekly.

Jordan, a resource-poor Middle Eastern country, has never been fully compensated for its assistance to refugees from all of the region’s conflicts over many decades, Fakhoury told CNS.

Last year, only 37 percent of the $2.3 billion requested for humanitarian assistance in Jordan was received, and that’s been one of the highest percentages ever received.

Jordan’s Information Minister Mohammed al-Momani said his country’s economy and security have been negatively impacted by the protracted conflict in Syria. Jordan’s military also bears the sole responsibility of protecting the 235-mile border between the two countries, he told reporters.

“The Syrian crisis is a global security threat and provides the highest caseload of refugees worldwide,” Kallon added.

Jordan is one of five host countries for nearly 4 million Syrian war refugees.

NEXT: Pope: Marriage is brave promise to love like Jesus, not showy ceremony