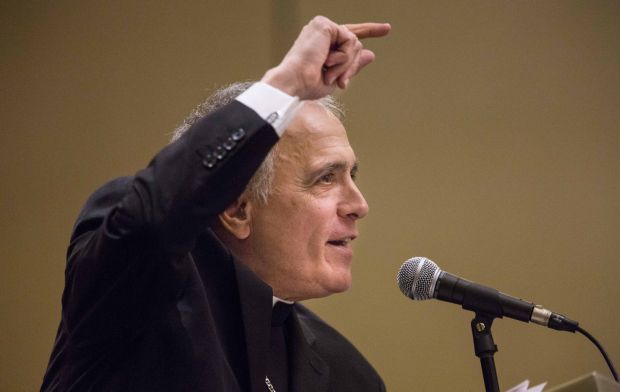 ST. LOUIS (CNS) — As the role of the laity in the Catholic Church expands, lay ministers have a co-responsibility with their ordained counterparts in furthering the church’s mission of evangelization, said Cardinal Daniel N. DiNardo of Galveston-Houston.

Cardinal DiNardo was the opening speaker at the Lay Ecclesial Ministry Summit June 7-8 in St. Louis. About 120 bishops and pastoral leaders reflected on “Co-Workers in the Vineyard of the Lord,” the bishops’ statement on lay ecclesial ministry released 10 years ago. They also discussed the current landscape of lay ministry and what the future holds.

The summit, held just prior to the bishops’ annual spring general assembly June 10-12 in St. Louis, was sponsored by U.S. Conference of Catholic Bishops’ Committee on Laity, Marriage, Family Life and Youth, Committee on Cultural Diversity in the Church and the Subcommittee on Certification for Ecclesial Ministry and Service, with the support of the Committee on Doctrine.

There are more than 39,600 lay ecclesial ministers in the United States, according to the Center for Applied Research in the Apostolate at Georgetown University. They are primarily involved in religious education, sacramental preparation, liturgy and/or music ministry and general parish administration.

Cardinal DiNardo said the bishops’ statement was a “watershed document” that offered a slice of a fuller picture of “delineating the meaning about co-responsibility among the faithful and the shepherds for the church’s mission of evangelization.”

There has been a tremendous growth in lay ecclesial ministers in certain areas of the United States in the past 10 years, he said. Speaking from the experiences in the Archdiocese of Galveston-Houston, the rising immigrant population has made the need for lay ministers even more intense, he noted.

In the Archdiocese of Galveston-Houston, Cardinal DiNardo said there are at least eight parishes with more than 6,000 members — four of them have more than 10,000. Those parishes may have only two priests, but six or seven permanent deacons and a staff of 50 to 60 lay ministers.

“For us, lay ecclesial ministers are extremely important,” he said.

Lay ministers responsible for the Rite of Christian Initiation for Adults and RCIA adapted for children has grown in the archdiocese, he added. In the past several years, nearly 2,400 people have come into the Catholic Church at the Easter Vigil each year, 2,000 of whom were catechumens — people who have never been baptized.

“We need incredibly well-trained lay ecclesial ministers to discern what is happening when the margins are at your doors,” he said.

There also is an increasing desire among lay ministers, especially among younger generations, for a contemplative dimension of discipleship.

“They’re so big on gadgets that there’s nothing they love more in the church than quiet and contemplation,” he said. “The quietest I can get 2,300 screaming teenagers in three weeks at our huge youth rally will be an hour-and-a-half of adoration. You won’t hear a peep for an hour-and-a-half. They say it’s the highlight of the weekend.”

The church also needs to increase its prayers for lay ecclesial ministers and show them love, said Cardinal DiNardo. “We need to build up a church of missionary disciples and need them to be a laboratory and leaven for everyone, so people pick up the boldness of proclamation.”

NEXT: Obama in CHA address thanks organization for supporting health care law