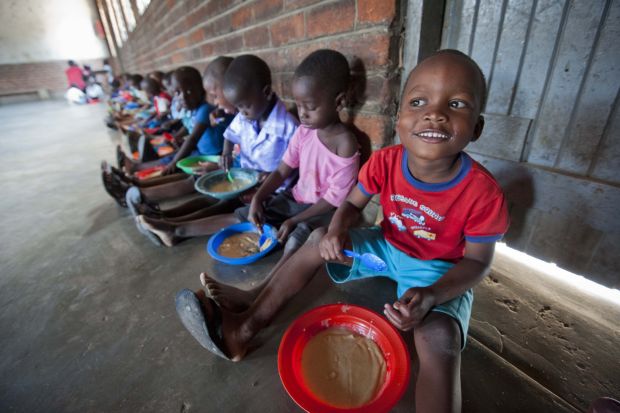 MELBOURNE, Fla. (CNS) — Mary’s Meals is a story of boundless proportions — feeding 1 million schoolchildren in 13 countries their daily meal even as 18,000 die of hunger-related diseases every day.

In late May, the 1 millionth child to receive food was celebrated in Malawi and Niagara Falls in Canada was bathed in blue lighting — the color of Mary’s Meals to honor the power of this achievement for life.

It began with a salmon farmer in a little shed in Scotland who as a teenager in 1982 visited Medjugorje in what is now Bosnia-Herzegovina. He was on a pilgrimage with his family.

Today, he is one of Time magazine’s 100 most influential people in the world for 2015.

“My experience in Medjugorje completely changed me,” said Magnus MacFarlane-Barrow, who with wife Julie met Pope Francis in 2013. “I was listening with my heart and had an experience of God’s love. It was a greater awareness that God had a plan for my life and not just for me, but for everyone’s life.”

In 1992, a news bulletin on the war in Bosnia sent him into the battle zone with a truckload of relief items for its victims. That endeavor became the foundation for his work — he and his family continued to help with famine relief and aid of all kinds wherever the opportunity presented itself.

Mary’s Meals was born in 2002, when MacFarlane-Barrow met a mother of six dying of AIDS in a hut in Malawi. She was concerned that all she could do was pray that someone would care for her children. He asked her eldest son, 14-year-old Edward, what he hoped for in life and it was his response that has now fed 1 million schoolchildren.

“I want to have enough food to eat and to go to school one day,” Edward replied.

In an interview with Catholic News Service, MacFarlane-Barrow explained that the keys to the success of Mary’s Meals are in first respecting the dignity of each person and secondly ensuring that they retain responsibility for themselves.

Mary’s Meals works with the local structures — in many cases tribal chiefs — to procure food from local farmers, as well as volunteers to cook the meals for the children and provide the educational resources and proper environment for the program.

The environment, the lack of roads, “huge corruption” are the obstacles that are overcome by the Mary’s Meals model of local ownership.

“This work of Mary’s Meals is the fruit of prayer,” MacFarlane-Barrow continued. “It starts with prayer — having a discipline with prayer even if you don’t feel inspired or don’t feel God’s presence — you do it anyway. When I’m so busy I don’t have time for my daily routine of prayer, I depend on the prayer of others. I know their prayer is carrying me.”

The entire story of his humanitarian effort and achievement comes alive in MacFarlane-Barrow’s book, “The Shed That Fed a Million Children,” released in mid-May by HarperCollins.

In an endorsement on the book jacket, New York Cardinal Timothy M. Dolan called it “a great testament to the wonderful things that can be accomplished when people work together. … It’s a modern-day miracle of the multiplication of the loaves and fish.”

MacFarlane-Barrow chose to kick off his book tour in Iowa, because the state, he said, “is an incredible place in terms of support of Mary’s Meals.”

“It wasn’t a difficult decision to make to come to Iowa to launch the book,” he told The Catholic Messenger, newspaper of the Diocese of Davenport, Iowa, while he was in Solon.

Solon residents in fact, presented him with a check for more than $16,000. They’re hoping to raise a total of $25,000 to feed the children in a Malawi school for one year. After Solon, he was heading to Indianola and West Des Moines.

MacFarlane-Barrow stood in the midst of a small crowd on a street corner outside St. Mary Catholic Church in Solon to watch participants take off in a fun run/walk to raise money for Mary’s Meals.

Dressed in a blue-checked shirt and khaki slacks, the international humanitarian looked like the other parents in the crowd.

With the noncompetitive run/walk underway, MacFarlane-Barrow strolled back to the parish building and ducked into the church to pray before signing books. “I hope this work of Mary’s Meals — this happy news of Mary’s Meals gives glory to God and gives honor to Mary, his mother, and points us to her son, Jesus,” he told The Catholic Messenger.

Ellen Miller, youth ministry leader at St. Thomas Aquinas Parish in Indianola, is coordinator of Mary’s Meals in the heartland region. She was leading a mission trip to Medjugorje in 2009 when she first heard MacFarlane-Barrow speak. Her son Michael was a college senior and encouraged her to help when she seemed too busy.

“It’s so easy to do something,” he had said. Today, Michael and his family live in Malawi working for Mary’s Meals while his mother works at home to raise the $19.50 needed to feed just one schoolchild for an entire year.

“I have visited my son,’ Miller told CNS. “When you look into the eyes of the children and see the joy, you want for them what your own children and grandchildren have had — food and a future. An orphan asked me ‘Why do you help us?’ I explained, ‘In America, we believe no one should go hungry and everyone should have an education. And I love you because you’re God’s child.'”

When asked what the future holds for Mary’s Meals, MacFarlane-Barrow told CNS, “It’s the next hungry child.”

“The most important bits of this work is to honor Our Lady,” MacFarlane-Barrow said. “I have a huge sense of responsibility in doing work in her name — that we might always do this work that honors her and points to her Son.”

Contributing to this story was Barb Arland-Fye in Solon.

NEXT: Cardinal: Lay ministers co-workers in evangelization mission of church