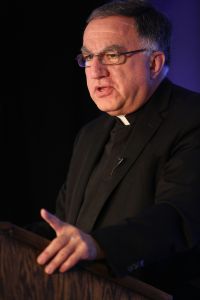 BUFFALO, N.Y. (CNS) — Catholic journalists could easily “remain on the surface” when reporting on Pope Francis with his great photo opportunities and “buzz-catching expressions,” but they need to take their coverage a step further, said Basilian Father Thomas Rosica.

“Our work as Catholic media is not to remain on the surface but to go to the deeper level of that story within the story,” urged the priest, founding CEO of Canada’s Salt and Light Catholic Media Foundation.

Father Rosica was the keynote speaker June 26 at the Catholic Media Conference in Buffalo. He also was the recipient of the Clarion Award from the Catholic Academy of Communication Professionals, presented June 25 at the organization’s Gabriel Awards banquet. The award recognizes creativity, excellence and leadership in communications and ecumenical cooperation.

The priest, born in Rochester, got his journalism start by writing a weekly section of the Courier-Journal daily newspaper about Catholic school events.

In his address, he told Catholic media representatives about the pope’s recent headline-making comments about how he doesn’t watch television, have a laptop or an iPhone.

Those remarks are not the end of the story though and Father Rosica said they shouldn’t suggest the pope has no interest in modern technology.

The “pope is by no means a Luddite,” he said, noting that Pope Francis “understands what authentic communication is all about” and demonstrates it in the ways he connects with people and what he wrote in “Laudato Si'” about how modern media can “shield us from direct contact with the pain, the fears and the joys of others and the complexity of their personal experiences.”

Father Rosica said the pope’s ecumenical outreaches often make for nice photos or quick headlines but also should be given a deeper look. He said although these “gestures are new and even disconcerting to some, the idea of growth in unity being the result of growth in fidelity to Christ is not.”

Another key aspect of the pope’s ministry — his calling together of the Synod of Bishops on the family last October — was also reduced to sound bites, that at times were inaccurate, the priest said.

He told the group of journalists and media professionals that they may have heard, read or even incorrectly reported that the synod was “about changing the teaching of the church on marriage, family life or sexual morality. This is not true. It was about the pastoral care that the church strives to (give) people, the ‘motherly love of the church,’ especially when facing difficult moments and experiences in family life.”

Father Rosica stressed that any reports that the synod “represented a defeat for Pope Francis or that he was disappointed at its outcome” are totally false. At the end of the two weeks, the pope said the gathering had been “a spiritual journey, not a debating chamber.”

The priest urged journalists to read the text of the pope’s closing address at the synod, which he said confirms the “story within the story” of the synod’s achievement.

Father Rosica also drew attention to the pope’s recent encyclical “Laudato Si,'” pointing out that “until now, the dialogue about the environment has been framed mainly using political, scientific and economic language. Now, the language of faith enters the discussion.”

He said the document is “deeply uncomfortable” because it not only addresses climate change but the “deeper tragedy of humanity itself.”

He also disagreed with those who argue that the pope has no authority to speak on this issue, stressing that it builds on Catholic social teaching. He also noted that when journalists report on the encyclical, they need to present the “full picture” of the document which calls for a response to the cry of the earth and the poor.

Father Rosica reminded members of the Catholic media that Pope Francis has declared the upcoming year as a Year of Mercy, which means that the pope wants everyone in the church to “open themselves to God’s mercy and to find concrete, creative ways to put mercy into practice.”

The church can live out mercy when parishes reflect the image of church as “field hospital” that Pope Francis has used, but such work also can be done by members of the Catholic media, he added.

“In this room, there are close to 300 field hospital workers ready for deployment,” he said, urging them to recognize how the world is in need of the pope’s “revolution of tenderness, mercy and normalcy now more than ever before.”

“Be sure to tell that story to the world,” he told them.