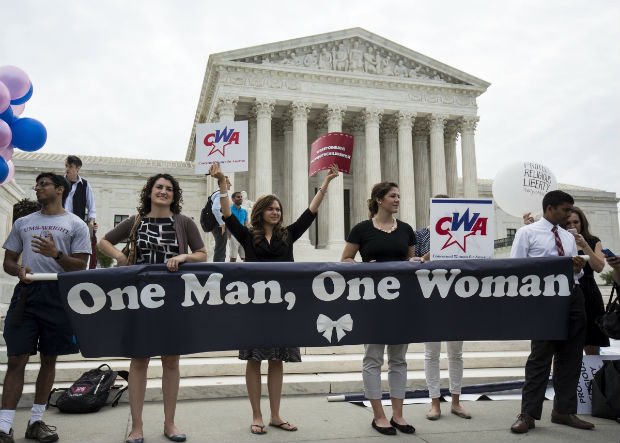 Supporters of traditional marriage between a man and a woman rally in front of the U.S. Supreme Court in Washington June 26, shortly before the justices handed down a 5-4 ruling that states must license same-sex marriages and must recognize same-sex marr iages performed in other states. (CNS photo/Joshua Roberts, Reuters)

WASHINGTON (CNS) — Analyzing the ramifications of the June 26 same-sex marriage ruling for the Catholic Church at the national, state and local levels will take time, said Archbishop William E. Lori of Baltimore.

It has implications for “hundreds, if not thousands” of laws at all levels, and there is “a difficult road ahead for people of faith,” he said.

Archbishop Lori, chairman of the U.S. bishops’ Ad Hoc Committee for Religious Liberty, made the comments in a teleconference for news media held about three hours after the Supreme Court issued its 5-4 decision that states must license same-sex marriage.

Joining him in the media briefing were two members of the bishops’ Subcommittee for the Promotion and Defense of Marriage, Archbishop Timothy P. Broglio of the U.S. Archdiocese for the Military, and Bishop Daniel E. Flores of Brownsville, Texas; and Anthony Picarello, associate general secretary and general counsel at the U.S. Conference of Catholic Bishops.

“Tragically, the court was wrong,” said Archbishop Broglio, adding that this is “not the first time” a “false understanding of marriage” has been forced on the country, as by lower court rulings.

“Clearly the decision was not required by the Constitution (and) the narrowness of the decision reveals it is not settled,” he continued. “Marriage is unchangeable.”

Echoing an earlier statement by Archbishop Joseph E. Kurtz of Louisville, Kentucky, USCCB president, Archbishop Broglio said the church will continue to follow Christ, “in solidarity with pope,” in adhering to the church’s teaching on marriage being between one man and one woman.

Archbishop Lori acknowledged that the court’s decision in Obergefell v. Hodges “makes a nod in the direction of religious liberty.” But that, he said, is too narrow.

The ruling “recognizes free speech, the right of religion to teach or advocate with regard to the true definition of marriage, but it does not acknowledge (that) the First Amendment also protects freedom of religion and the right to follow our teaching,” he said.

Justice Anthony Kennedy, writing for the majority, recognized in several places the role of religious beliefs in the questions surrounding same-sex marriage, saying that “it must be emphasized that religions, and those who adhere to religious doctrines, may continue to advocate with utmost, sincere conviction that, by divine precepts, same-sex marriage should not be condoned.”

Kennedy also said in part that “those who believe allowing same-sex marriage is proper or indeed essential, whether as a matter of religious conviction or secular belief, may engage those who disagree with their view in an open and searching debate.”

But Archbishop Lori said free speech is not at issue. Under the ruling, “we retain the right to think what we want at home and within the confines of the church” but it does not address the First Amendment’s guarantee to free exercise of religion. The church should be able to operate “our ministries … without fear of being silenced, penalized,” he said.

Through social services, “we serve millions of people every day. We do it well and we do it lovingly,” he added.

He foresees many legal challenges and controversies as the church seeks to protect itself from the fallout of the marriage ruling by advocating at the federal, state and local levels for protections for its faith-based practices.

Some areas where there will be legal disputes, Picarello said, were outlined by Chief Justice John Roberts, including tax exemptions, campus housing, academic accreditation, employment and employee benefits.

The U.S. Catholic Church will have to look at internal ways to protect itself against legal challenges, Picarello said, and “advocate externally for legislation, regulation and, if necessary, litigation.”

Picarello said free speech protections for opponents of same-sex marriage were already under attack. Within a couple of hours of the decision being issued, he said, a newspaper in Pennsylvania announced it will no longer accept op-eds criticizing same-sex marriage.

“Some things will happen immediately,” as seen by that newspaper’s announcement, he said, and some will take time to unfold,” like challenges to churches receiving tax exemptions.

Another area that will require study, Archbishop Broglio said, is the military chaplaincy, because the Catholic priest-chaplains whom his archdiocese oversees also come under civil authorities.

While polls show a majority of Catholics say they approve of same-sex marriage, Catholic teaching is “never determined by numbers but by the truth,” Archbishop Broglio said. “We have to be faithful to the teaching of the Gospel.”

“In a pastoral context we respond to the individual in his or her need and that’s quite different than what we teach concretely,” he added. The church must make its “teaching on marriage very, very clear,” while at the time be pastoral to individuals.

The church teaches marriage is between a man and a woman and that sex outside marriage is a sin. At the same time the church upholds the human dignity of all people, Archbishop Lori said, adding, “We preach the truth with love in season and out of season.”

“It is evident we are living in an age of dramatic cultural shift,” said Bishop Flores, and the church has to think about how to share its teaching and “announce the good news … as creatively as possible in current cultural context.”

But he added that the church’s teaching on marriage “also has something to do with bringing children into the world” and about stable families. “We ought to have our eye not on ourselves or our own emotional needs … but the needs of the young.”

Bishop Flores said rhetoric such as calling opponents of same-sex marriage bigots is used at times “to avoid understanding the rationale” of what the church teaches.

“For our part we have to be prepared for that kind of rhetoric and simply respond with charitable but persuasive” explanations of the church’s rationale and what word “marriage” means and the way it has been understood for millennia, he added.

Archbishop Broglio added that the Catholic Church survived the anti-Catholicism of the Know-Nothing period, “so we will survive this.”