Health care subsidy ruling hailed by many, but criticism continues 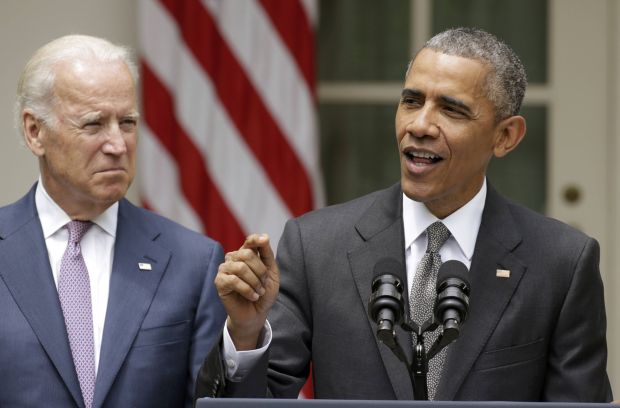 U.S. President Barack Obama, with Vice President Joe Biden next to him, delivers remarks June 25 after the Supreme Court ruled 6-3 to uphold tax subsidies for participants in health exchanges run by the federal government in states that refused to create them. Obama and Biden are seen in the Rose Garden at the White House in Washington. (CNS photo/Gary Cameron, Reuters)

WASHINGTON (CNS) — The Supreme Court’s 6-3 ruling that upheld federal subsidies to keep health insurance premiums affordable regardless of whether the state or federal government runs the exchange system was welcomed by the president as well as by several religious organizations and stockholders in health care systems.

The June 25 decision in King v. Burwell said that “Congress passed the Affordable Care Act to improve health insurance markets, not to destroy them,” and upheld the federal tax breaks that have made it possible for an estimated 6.4 million people in the 34 affected states to be able to afford health insurance because of subsidies averaging $272 a month.

Sister Carol Keehan, president and CEO of the Catholic Health Association, said in a statement that the court “has granted a victory for the Affordable Care Act and the health of our nation.”

Challenges to the ACA have ranged from “false rumors to judicial disputes,” the Daughter of Charity noted, adding that “it is time to move on. Our collective time and energy should now be spent building on the progress we have already made.”

Some of the judicial disputes involving the ACA continue to work through the courts, however.

Just a few days before the King v. Burwell ruling, the 5th U.S. Circuit Court of Appeals decided against several faith-based institutions — including Catholic, Baptist and Presbyterian colleges and the Catholic dioceses of Fort Worth and Beaumont, Texas — that sought injunctions blocking part of the law from applying to them. They argue that their religious rights are infringed upon by the process the government established for nonprofit religious employers to decline to participate in providing coverage of contraceptives, a requirement of the ACA for most employers.

The National Right to Life Committee was among critics, saying the ACA subsidies “are helping pay for over 1,000 health plans that cover abortion on demand.” A statement from Right to Life president Carol Tobias said “only Congress can put a stop to that.”

Several Republican members of Congress and Republican candidates for president vowed to continue to try to overturn the law.

President Barack Obama, in a statement from the White House shortly after the ruling was issued, called the ruling “a victory for hardworking Americans all across the country whose lives will continue to become more secure in a changing economy because of this law.”

He noted that since the bill passed in 2010, Congress has taken more than 50 votes to repeal or weaken the law, even after a presidential election (2012) “based in part on preserving or repealing” it and after multiple legal challenges. “The Affordable Care Act is here to stay.”

As he has numerous times as the law passed its fifth anniversary earlier this year, he rattled off lists of who has benefited from the ACA: 16 million who previously had no insurance; millions of young adults who have been able to stay on their parents’ policies; 9 million seniors or people with disabilities who now have discounts on prescription drugs; and previously insured people whose health care costs have risen at the slowest rate in 50 years.

“The point is, this is not an abstract thing anymore,” Obama said. “This is not a set of political talking points. This is reality. We can see how it is working. This law is working exactly as it’s supposed to. In many ways, this law is working better than we expected it to. For all the misinformation campaigns, all the doomsday predictions, all the talk of death panels and job destruction, for all the repeal attempts — this law is now helping tens of millions of Americans.”

The Associated Press reported that shares of hospital stocks jumped as news of the court’s action spread. It noted that investors had worried that if subsidies disappeared in those 34 states, many people could long longer afford coverage and would drop their insurance. Since the ACA took effect, the costs to health care providers of covering expenses from treating uninsured patients have decreased.

Network, a Catholic social justice lobby, issued a statement from executive director Sister Simone Campbell calling the ruling a “pro-life decision” that is “an important response to what Pope Francis states in his new encyclical — that we must care for all of God’s children, not exploit those with less power and money.”

The Sister of Social Service said the ruling “will save millions of lives” but that elected officials must work toward making the law better to save millions more.

“It is time now for our health systems, our corporations, and our elected officials to stop opposing progress and begin accepting the health reform that our nation desperately needs,” Sister Simone said. “As long as there are people who still lack affordable, quality healthcare we must work to ensure that they have access to this essential human right.”

Several Georgetown University law professors provided comments describing the underlying issues of opposition to the ACA as a part of political battles.

“The court appears to be signaling that the future of health care reform must be fought out exclusively in the political arena,” said professor David Super. The ruling breaks little new ground, “rejecting the implausible reading plaintiffs tried to give the act.”

He said it’s inevitable that there will be additional legal challenges to health care reform, but that “the court is sending a strong signal that it will not reach for opportunities to interfere with the act’s central features. This decision sends the same message that the Supreme Court sent the nation in the late 1930s, which it decisively rejected any further challenges to the core of the New Deal.”

Other cases challenge the ACA as an unconstitutional tax and action the Obama administration took to delay the cancellation of existing insurance plans that didn’t meet the ACA’s standards.

From the crowd gathered outside the court came chants of “ACA! USA!” and “Ho ho! Hey hey! The ACA is here to stay!”

Shiveta Vaed, who is from St. Louis but currently enrolled in law school at the University of Minnesota, said she had come to the court with an organization that supported the ACA tax subsidies, and she added health care is her primary interest as a law student.

“This is just such a great decision for us. For families. For women. For babies,” she told Catholic News Service. She also praised the court for its 2012 decision upholding ACA itself.

“Health care is something that everybody should have,” she said, and people who comply with the law should get be able to get financial help if they need it. ACA is “such a huge change. It is such a culture shift for us,” Vaed said.

The health care culture in the U.S. “really difficult to overcome and to bring in line with the rest of the developed world.”

Kaiya Lyons also was outside the court. She told CNS the day’s ruling was a “step in the right direction for women and minorities.”

Arkadi Gerney, a senior vice president at the Center for American Progress, referred to the tax subsidies as a “central pillar of the entire health care law” and called the decision a repudiation of the campaign undo the law.

Also in the crowd was ACA opponent Twila Brase, the president and co-founder of Citizens’ Council for Health Freedom. The organization was started 21 years ago to fight what she called “Hillarycare,” referring to the failed effort on health care reform led by Hillary Clinton when her husband, Bill, was president and she was first lady.

Brase told CNS that ACA “violates rule of law” and the Supreme Court with its ruling shot down the ability of people in the affected states to “have their freedom restored.” She said she would continue to “push for repeal.”

Abbey Jaroma and Daniel O’Shea contributed to this story.

NEXT: South Carolinians pay tribute to slain pastor-senator, other victims