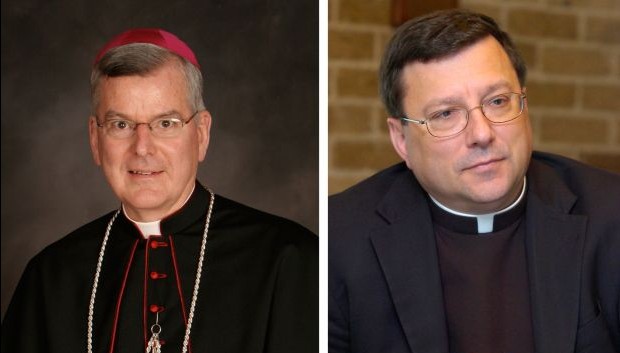 In a statement, Archbishop Nienstedt said he submitted his resignation to Pope Francis “to give the archdiocese a new beginning amidst the many challenges we face.”

“The Catholic Church is not our church, but Christ’s church, and we are merely stewards for a time,” he said. “My leadership has unfortunately drawn away from the good works of his church and those who perform them. Thus, my decision to step down.”

On June 5, the Ramsey County Attorney’s Office filed criminal and civil charges against the archdiocese alleging it failed to protect three boys who were sexually abused in 2008-2010 by Curtis Wehmeyer, a former priest of the archdiocese.

Wehmeyer was convicted of the abuse and is serving a five-year prison sentence. He was dismissed from the priesthood in March.

Archbishop Nienstedt, 68, was appointed coadjutor archbishop of St. Paul and Minneapolis in 2007, and installed as its archbishop in June 2008, succeeding Archbishop Harry J. Flynn, who retired.

Prior to taking the helm of the archdiocese, Archbishop Nienstedt was bishop of New Ulm, Minnesota, from 2001 to 2007, and auxiliary bishop of Detroit from 1996 to 2001.

“It has been my privilege the last seven years to serve this local church,” Archbishop Nienstedt said in a statement. “I have come to appreciate deeply the vitality of the 187 parishes that make up the Archdiocese of St. Paul and Minneapolis. I am grateful for the support I have received from priests, deacons, religious men and women and lay leaders, especially those who have collaborated with me in the oversight of this local church.”

He added: “I leave with a clear conscience knowing that my team and I have put in place solid protocols to ensure protection of minors and vulnerable adults.”

Archbishop Nienstedt requested prayers for “the well-being of this archdiocese and its future leaders.”

“I also ask for your continued prayers for me,” he said.

Bishop Piche, 57, was ordained as an auxiliary for St. Paul and Minneapolis in 2009.

“The people of the Archdiocese of St. Paul and Minneapolis needed healing and hope. I was getting in the way of that, so I had to resign,” he said in a statement. “It has been a privilege to serve this local church, and I will continue to hold everyone in the archdiocese in my prayers.”

In his statement, he noted that the position of an apostolic administrator is temporary and his role “is not to introduce change, but rather to facilitate the smooth continuation of the ordinary and essential activities of the church, while advancing those positive initiatives to which the archdiocese is already committed.”

Still, he said, he hoped to meet as many people as possible in the archdiocese while still fulfilling his responsibilities in Newark.

“As the universal church prepares to embark on a Year of Mercy, I look forward to getting to know this local church and experiencing in a new context the marvelous ways in which the Lord works through his people to make his grace and healing presence known and felt, even in the most challenging of times,” Archbishop Hebda said.

Commenting on the resignations and the appointment of an apostolic administrator of his fellow bishops, Auxiliary Bishop Andrew H. Cozzens of St. Paul and Minneapolis pledged to work closely with Archbishop Hebda “to bring our archdiocese into a new day so that the work of proclaiming the Gospel of Jesus Christ, which we have done here for almost 165 years, may continue.”

Speaking to media outside the chancery offices June 15, he described the resignations as “a painful process” and said the transition to new leadership leaves “many unanswered questions.”

The Archdiocese of St. Paul and Minneapolis filed in January for reorganization under Chapter 11 of the U.S. Bankruptcy Code amid mounting claims of clergy sexual abuse. In 2013, the Minnesota Legislature lifted the civil statute of limitations on claims of child sexual abuse for a three-year period.

In May, the archdiocese announced that it would sell archdiocesan offices, including the archbishop’s residence, as part of the reorganization.

Barbara Dorris, outreach director of the Survivors Network of Those Abused by Priests, known as SNAP, welcomed the resignations. But she said that “one or two or three small steps doesn’t erase decades of complicity,” and added that Pope Francis’ “public relations advisers are trying hard to burnish his imagine prior to his U.S. trip.”

In Washington, reporters asked Cardinal Donald W. Wuerl about his reaction to the resignations. The cardinal was participating in a symposium on solidarity attended by religious and labor leaders held at AFL-CIO headquarters.

At a midday news conference on the symposium, Cardinal Wuerl said it was a “great tribute to Pope Francis” that the pontiff acted swiftly to accept the Minnesota prelates’ resignations.

Cardinal Wuerl said he believes the U.S. church response “has been exemplary on the issue of clerical abuse going back to 2002,” when the bishops first adopted the “Charter for the Protection of Children and Young People.” It was revised in 2005 and 2011.

“I’m hopeful that one … of the good things to come out of this for country” is to see “what the church has learned from this sad experience,” and view the church as a model of the “accountability required of all institutions,” not just the church. He urged other institutions to adopt the church’s “zero tolerance” on abuse and conduct the same background checks it does.

While there was no direct statement from the Vatican that the resignations of Archbishop Nienstedt and Bishop Piche were tied to the Minnesota archdiocese’s mishandling of abuse cases and the criminal charges it faces, Cardinal Wuerl said there could be no more explicit explanation from the church than the resignations themselves.

The fact a resignation is voluntary shows that “the person who resigns now understands the significance” of the situation, Cardinal Wuerl said.

Catholics nationwide took to social media with varying reactions to the resignations. On Facebook page of The Catholic Spirit, newspaper of the Minnesota archdiocese, many people said they were praying for the bishops and expressed appreciation for their ministry.

Mary Ann Kuharski told The Catholic Spirit she was heartsick when she heard the news. As the mother of a young priest ordained a year ago, she was in tears over the situation, but added that Catholics are a people of joy, hope and faith.

“You know, St. Paul says good comes from all things, so something good will come from this,” said Kuharski, the founder of Prolife Across America and a parishioner of St. Charles Borromeo in St. Anthony.

“The whole thing is very sad and confusing,” said Paul Bernabei, an educator and parishioner of Nativity of Our Lord in St. Paul. “I think this is going to send us deep into what’s important.”

He said, Catholics need to ask themselves how they can be “Christ’s presence in this story.”

“If we are and can be,” he said, “the church will rise up out of the ashes and will be something beautiful.”

Wiering is editor of The Catholic Spirit, newspaper of the Archdiocese of St. Paul and Minneapolis. Contributing to this story were Mark Pattison in Washington and Cindy Wooden in Rome.