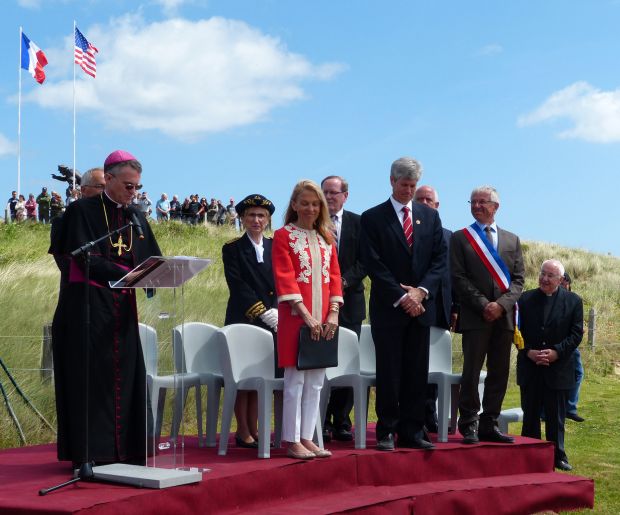 Archbishop Timothy P. Broglio of the U.S. Archdiocese for the Military Services gives the benediction following the June 6 dedication of a sculpture on Utah Beach in France to commemorate the 71st anniversary of D-Day, the historic World War II landing of Allied troops for the liberation of Europe. At right center on stage is U.S. Rep. Jeff Fortenberry of Nebraska. (CNS photo/U.S. Rep. Jeff Fortenberry of Nebraska)

WASHINGTON (CNS) — In a benediction delivered in France at Normandy during events to mark the 71st anniversary of D-Day, a U.S. archbishop prayed that God would “help us never to forget the sacrifices of this place and to be energetic so that war is never renewed.”

Archbishop Timothy P. Broglio of the U.S. Archdiocese of the Military Services gave the benediction June 6 after the dedication of a new monument on Utah Beach that depicts three American GIs emerging from a Higgins boat.

The famous amphibious landing craft, designed by Andrew Jackson Higgins, was used extensively in World War II, including on June 6, 1944, known as D-Day, when the Allies invaded the beaches at Normandy and began the liberation of German-occupied northwestern Europe from Nazi control.

The monument is an exact replica of one that stands in Higgins’ hometown of Columbus, Nebraska. It stands on France’s Utah Beach next to the U.S. Naval Memorial in front of the Utah Beach Museum.

“Oh Lord, we are gathered here in your presence on the anniversary of the landings of the Allied Forces who were trying to liberate Europe,” Archbishop Broglio prayed in French. “We thank them for their sacrifice; we pray for those who gave their young lives here; we recall the families who received corpses instead of their sons or spouses still living; we remember, as well, all of those who lost their lives because of their religion or ethnic group.”

He recalled “those who invented and produced” the Higgins boats, saying they had “labored with vision to accomplish a goal, the liberation of peoples, their brothers and sisters in human society.”

He prayed God would inspire people today with “the same vision and creativity in service of peace and cooperation among all members of human society.”

“Change our power to make war into a force for peace. Change our weapons into plowshares. Give us the ability to negotiate, to talk and to listen,” Archbishop Broglio said.

According to a new release from the Washington-based U.S. military archdiocese, a group of French and other European dignitaries attended the solemn D-Day anniversary ceremonies in Sainte-Marie-du-Mont, France. The dignitaries, it said, repeatedly acknowledged their gratitude to the Allies and vowed “never to forget the Allied liberation of their country from the Nazi occupation.”

Speakers included U.S. Rep. Jeffrey L. Fortenberry, R-Nebraska; Mayor Mike Moser of Columbus; a grand-nephew of Higgins; Sainte-Marie-du-Mont’s mayor; Timothy Kilvert-Jones, a military historian and retired major in the British Army who came up with the idea for the monument; and, representing the French government, the prefect of La Manche, which is a French department, or geographical region, in Lower Normandy.

Archbishop Broglio also attended a commemoration for fallen Danish troops and celebrated a morning Mass June 7 in the historic parish church of the town of Sainte-Mere-Eglise, the first village in Normandy to be liberated by the Americans on D-Day.

The Mass, celebrated on the feast of Corpus Christi, was an occasion to pray for world peace

It was on that church’s steeple that an American paratrooper was left hanging until he could be cut down. Pvt. John M. Steele had landed on the steeple during the invasion. His parachute was caught in one of the pinnacles of the church tower.

He was wounded and hung there limply for two hours, pretending to be dead. The Germans eventually cut him down and took him prisoner but he later escaped and rejoined his division. He was made famous in the movie “The Longest Day.”