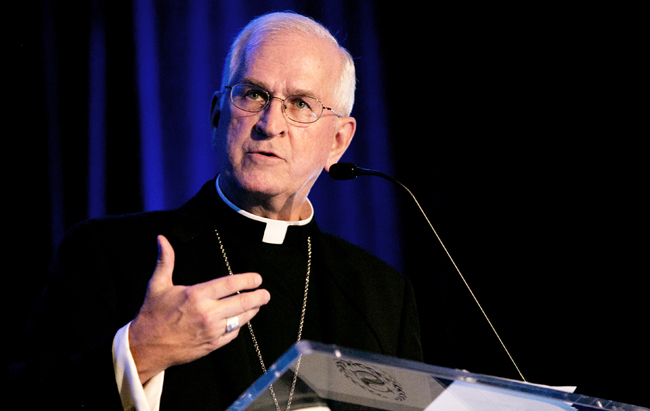 UPDATED – WASHINGTON (CNS) — The president of the U.S. bishops’ conference called the Supreme Court’s June 26 marriage ruling “a tragic error” and he urged Catholics to move forward with faith “in the unchanging truth about marriage being between one man and one woman.”

“Regardless of what a narrow majority of the Supreme Court may declare at this moment in history, the nature of the human person and marriage remains unchanged and unchangeable,” said Archbishop Joseph E. Kurtz of Louisville, Kentucky.

“It is profoundly immoral and unjust for the government to declare that two people of the same sex can constitute a marriage,” he said.

In a 5-4 decision, the Supreme Court June 26 said same-sex marriage is constitutional nationwide.

“Neither decision is rooted in the truth, and as a result, both will eventually fail,” he added.

The court had several marriage cases to consider and bundled them under the title of the Ohio case, Obergefell v. Hodges. That case arose after the October 2013 death of John Arthur of Cincinnati. He and his longtime partner, Obergefell, had married earlier that year in Maryland. When the local Ohio registrar agreed to list Obergefell as the surviving spouse on Arthur’s death certificate — which is key to a range of survivor’s benefits — the state attorney general challenged the status because Ohio law bars same-sex marriages.

The other cases included: Tanco v. Haslam, the Tennessee case, and Bourke v. Beshear, the Kentucky case, which similarly challenge those states’ refusal to recognize same-sex marriages performed in other jurisdictions, and DeBoer v. Snyder, the Michigan adoption case.

“The unique meaning of marriage as the union of one man and one woman is inscribed in our bodies as male and female,” Archbishop Kurtz said in his statement. “The protection of this meaning is a critical dimension of the ‘integral ecology’ that Pope Francis has called us to promote.

“Mandating marriage redefinition across the country is a tragic error that harms the common good and most vulnerable among us, especially children. The law has a duty to support every child’s basic right to be raised, where possible, by his or her married mother and father in a stable home.”

The archbishop said the U.S. bishops will continue to teach as Jesus did. Christ taught “with great love” and “unambiguously that from the beginning marriage is the lifelong union of one man and one woman,” he added.

Archbishop Kurtz encouraged Catholics “to move forward with faith, hope, and love: faith in the unchanging truth about marriage, rooted in the immutable nature of the human person and confirmed by divine revelation; hope that these truths will once again prevail in our society, not only by their logic, but by their great beauty and manifest service to the common good; and love for all our neighbors, even those who hate us or would punish us for our faith and moral convictions.”

He urged all people of goodwill to join the Catholic Church “in proclaiming the goodness, truth, and beauty of marriage as rightly understood for millennia, and I ask all in positions of power and authority to respect the God-given freedom to seek, live by, and bear witness to the truth.

NEXT: Implications of marriage ruling unclear, but far reaching