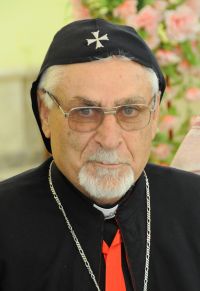 Syriac Catholic Archbishop Yohanna Moshe of Mosul, Iraq, is pictured in a 2011 photo. (CNS photo/courtesy Aid to the Church in Need)

Speaking with the pontifical foundation Aid to the Church in Need on the first anniversary of the Islamic State’s takeover of Mosul, Archbishop Moshe said that forcing out Islamic State forces was the “best solution” for the 120,000 displaced Christians who fled the city June 10, 2014, and nearby towns and villages that were seized in early August.

“The only solution that will make them happy and give them dignity is to go back to their homes,” he told the agency.

“We ask everyone to put pressure on the people who have the responsibility to free the (towns and villages) as soon as possible so the people can come back and live in peace in their … homes and continue their lives there,” the archbishop said.

Archbishop Moshe, who also was forced to flee Mosul, asked for prayers for the displaced Christians and “especially for our political leaders to help them find the solution that will allow us to go back to our cities.”

The agency said the archbishop’s comments reflect the continuing frustration among senior Middle East clergy about what they perceive as the West’s reluctance to commit to a full-scale intervention against extremism in the region.

The Syriac Catholic prelate also suggested that if western nations were unable to oust Islamic State forces, they should welcome Christians and others seeking asylum.

“I am calling on the international community: If they cannot protect us, then they must open their doors and help us start a new life elsewhere,” he said. “But we would prefer to be in Iraq and be protected in Iraq.”

Archbishop Moshe expressed concern over reports of the destruction of religious artifacts and historic buildings by the militants in the occupied Christian communities.

“All our heritage is in Mosul, in Qaraqosh, but especially in the monastery of St. Behnam, which dates back to the fourth century A.D.,” he told the agency. “I have heard that some parts of the monastery, which is quite famous and old and contains thousands of Scriptures, were destroyed.

“But we have no news about our churches and monasteries because we have no one left in Mosul to report on it.”

NEXT: Quebec Archdiocese reshapes itself as Mass attendance falls