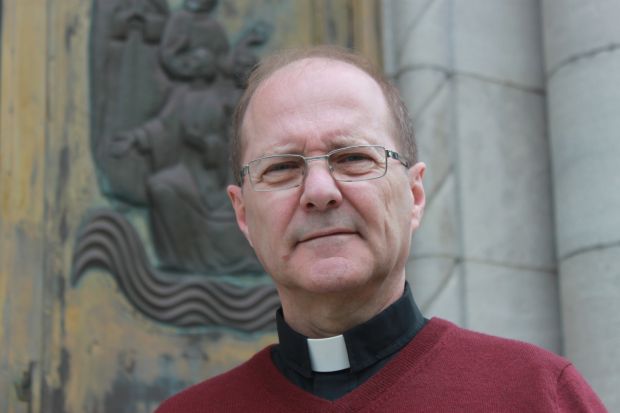 Father Pierre Gingras, pastor of St. John the Baptist Church in Quebec City, is pictured in a late May photo. (CNS photo/Philippe Vaillancourt) 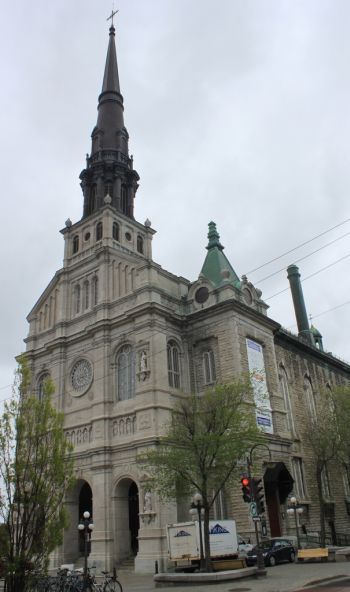 An exterior of St. John the Baptist Church in Quebec City is seen in a late May photo. Dedicated to the patron saint of French Canadians, the church stands among the high profile churches of both the archdiocese and Quebec province. Despite being a heritage church, the archdiocese planned to close it because of dwindling membership and massive repairs. (CNS photo/Philippe Vaillancourt)

QUEBEC CITY (CNS) — With the decision to close one of its largest and most important churches, the Archdiocese of Quebec is sending a clear message: The future of even the most majestic churches cannot be guaranteed anymore.

On May 24, one last Mass was celebrated in renowned St. John the Baptist Church. Dedicated to the patron saint of French Canadians, the church stands among the high-profile churches of both the archdiocese and Quebec province. Built in the 1880s, it is recognized as a major heritage church. Its seating capacity of 2,400 compares to St. Patrick’s Cathedral in New York.

But such a marvel comes with a steep price: It needs renovations estimated at $10 million, a gargantuan amount for a parish that has been accumulating deficits for years. Even with the help of the archdiocese, the Catholic Church of Quebec simply doesn’t have that kind of money. Not anymore.

Over the past decade, the dioceses of the Quebec province had to close churches in response to the new secularized reality: less faithful, less money, yet too many churches. But still, some of the buildings were considered “untouchable.” With the closing of St. John the Baptist, parishioners realize change is afoot.

“It’s sad, obviously,” said Quebec Auxiliary Bishop Gaetan Proulx. “It’s the signal that we’re moving towards something else, with smaller communities. The model for our church is changing.”

Bishop Proulx compared St. John the Baptist to a lighthouse, because its high steeple it can be seen from all around the city. “It was the symbol that the Catholic faith is well established here,” he said. “But it also symbolizes a legacy. Churches are to the province of Quebec what castles are to France.”

And it seems the Catholic Church in Quebec will not be able to save all of its castles.

Throughout the French-speaking Canadian province, there are 2,756 places of worship. Most are Catholic churches. The Quebec Archdiocese, the first and oldest Canadian diocese, has 198 churches. By 2020, they will be merged into 29 entities that the archdiocese is calling “communions of communities” in a process that is already underway. Bishop Proulx deems it “realistic” to stipulate that, eventually, half of the churches will have to close, the bulk of them in the next 10 years.

Church closings have become an increasing trend over the past several years in the province. The Quebec Council of Religious Heritage reported that a record 72 churches were shuttered in 2014.

“A few years ago, churches had to close because they were lacking human resources. But now, the decision to close them is motivated by the fact that it costs too much money to keep them open,” said Denis Boucher of the council.

The socio-economic capacity to finance church transformations — about 200 churches in the province are waiting to be converted for other uses — is getting thinner, Boucher explained. In other words, the “market” for churches has become saturated. For Boucher, St. John the Baptist, because of its size and the expensive renovations needed, represents a huge challenge.

“We will have to be very imaginative. I would wait before saying it is the beginning of the end for our biggest churches. But one thing is certain: We will have to find new business models to save these ‘great naves,'” he said.

The priest in charge of St. John the Baptist admitted that his last nights there were difficult. He has celebrated last Masses for other churches before, but this one felt different. “It doesn’t get easier,” said Father Pierre Gingras.

He is the person who announced in February that the parish would have to close the church and move the 200 parishioners left to St. Canadian Martyrs, a nearby church. Hopes were high that perhaps someone would have come to him in the spring with a business plan to keep the church open. But nothing happened.

“Our society now has a great cultural deficit,” Father Gingras said. “A lot of people do not understand even our religious vocabulary now. The gap is wide. So for me, what is happening with St. John the Baptist marks the end of an era. A spectacular era, very rallying and community-driven. This church was the heart of our community.”

In April, the priest organized meetings to allow citizens and parishioners to voice their memories and concerns. He focused on the moral and spiritual impact, sharing the joys and grieving with people. A few minutes before a daily Mass days before the church closed, two women asked him if it would be possible to sit in the sanctuary with him, around the altar, because it was one of the last liturgies there. Father Gingras agreed and went to the sacristy to get ready. When he came back a few minutes later, the entire congregation was sitting around the altar.

“Through it all, we are living beautiful moments. We are all sticking together,” he said, refusing to abandon himself to bitterness. After all, he pointed out, the parish chose Pentecost Sunday to celebrate its last Mass and send the faithful away.

NEXT: Franciscan: Encyclical title affirms all creatures have common creator