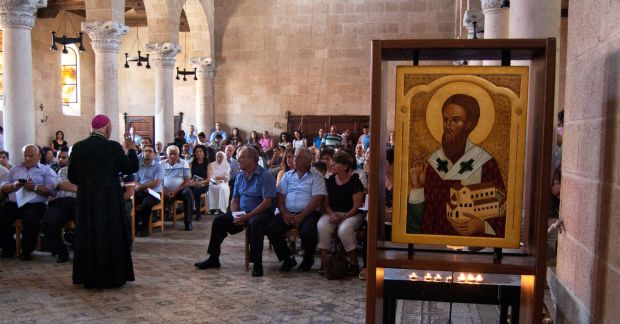 Retired Latin Patriarch Michel Sabbah of Jerusalem speaks to parishioners and visitors about religious co-existence and forgiveness during a prayer service at the Benedictine Church of the Multiplication in Tabgha, Israel June 21. (CNS photo/Mary Knight)

JERUSALEM (CNS) — Druze, Muslims and Jews joined thousands of Christians in a demonstration in Galilee three days after an arson attack seriously damaged the Benedictine Church of the Multiplication.

The demonstrators carried large wooden crosses and Vatican flags and called for justice June 21. At one point a group of young demonstrators blocked the access road to the church.

“We don’t seek revenge, but justice,” retired Latin Patriarch Michel Sabbah of Jerusalem said at a Mass celebrated at the church in Tabgha before the demonstration. Auxiliary Bishop Giacinto-Boulos Marcuzzo of Jerusalem concelebrated the Mass.

The June 18 blaze injured an elderly monk and a volunteer and destroyed the church’s roof while damaging a storage room, church offices and a prayer room. Israel has said it would help with repairs.

Although police initially detained 16 youths who had been camping in the area the night of the arson, they were later released. Authorities are continuing their investigation.

The Ha’aretz newspaper reported June 22 that ongoing attacks on churches have become a concern for police, who began intelligence work to identify activists with violent intentions in May 2014, before Pope Francis’ visit to Israel.

However, perpetrators of the attacks continue to elude investigators because they exist along the seam of extremist groups and religious theological groups, the report said. It noted that at the eye of the storm in Jerusalem are tensions at the Cenacle, which Christian tradition holds is the sight of Jesus’ last supper, while Jewish tradition believes that the chamber under it is the Tomb of David.

The Assembly of the Catholic Ordinaries of the Holy Land noted in a June 18 statement that the Tabgha attack is the third the Benedictine community in the Holy Land has suffered. One was on the Benedictine Dormition Abbey on Mount Zion near the Cenacle, where a fire was set May 26, 2014, just minutes after the departure of Pope Francis. The assembly noted that Benedictine monks on Mount Zion are incessantly the targets of “acts of contempt and violence.”

“Jews, Christians and Muslims together must fight against such manifestations of violence and extremism,” the statement said. “The education of young people in religious schools must be emphasized in favor of tolerance and coexistence. In recent months, other attacks were perpetrated against Christian sites or mosques and investigations were not followed up. Given the seriousness of these incidents, we demand immediate investigation, and the perpetrators of this act of vandalism be brought to justice.”

PREVIOUS: Pope says homilies must give people word of God, not ‘nice conferences’

NEXT: Ukrainians displaced by fighting tell USCCB delegation their concerns