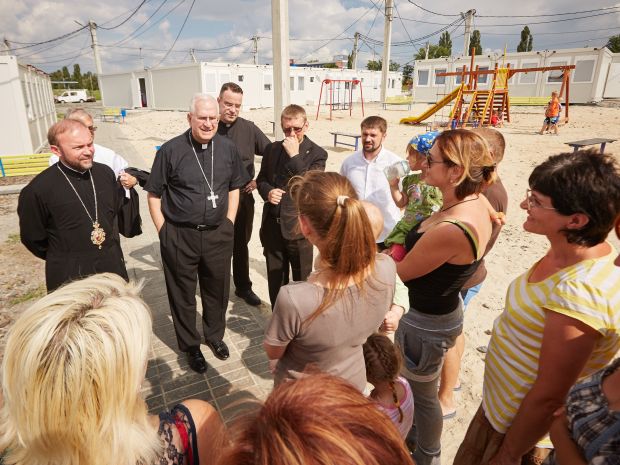 KHARKIV, Ukraine (CNS) — Young Artem is about to turn a year old, but all he has known in his short life is upheaval.

He was 3 weeks old when his mother, Iryna, and two siblings had to leave Horlivka, 28 miles from rebel-controlled Donetsk, because of the armed conflict that erupted in eastern Ukraine. Iryna and her children managed to catch the last train heading to territories controlled by the Ukrainian government.

They eventually found shelter in a camp for internally displaced people 180 miles away, near the Kharkiv airport. The camp for 400 people was built in January with German government support. It houses the most vulnerable of the displaced: single mothers and families with children.

Ask families why they left and the answer is unanimous: “It was too scary.”

A woman from Platovo in the Luhansk region whose son has Down syndrome hid in a basement for a week because of heavy shelling. Her husband left her a few years ago with three other children when he learned the couple’s son would be born with the syndrome. She gets the equivalent of about $60 a month from the government in support for the boy.

The family’s small cabin is filled with plants.

“I want to create a domestic atmosphere and love flowers,” said the woman, who added she does not believe that they will be able to get home soon.

Her story is typical. For most of the displaced Ukrainians, life was tough in peaceful times, and now it is much more difficult.

They shared their stories and experiences June 21 with the members of a U.S. Conference of Catholic Bishops delegation visiting Ukraine for four days to learn about the challenges facing thousands of people displaced by fighting between Russian-backed separatists and Ukrainian armed forces. Archbishop Joseph E. Kurtz of Louisville, Kentucky, USCCB president, and Archbishop Blase J. Cupich of Chicago, chairman of the U.S. bishops’ Subcommittee on Aid to the Church in Central and Eastern Europe, headed the delegation.

The displaced people eagerly showed the delegation their small rooms, bathrooms and the common kitchen. It was hot inside; the modular houses have no air conditioning. The boy with Down syndrome jumped up to hug Archbishop Kurtz.

“We never thought that we would hear explosions near our house,” one woman said. 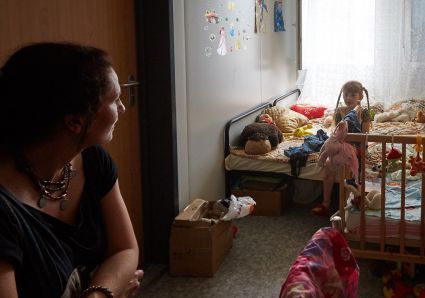 “Now the fighting stopped but there are no trains and means for life. It’s impossible to live there,” another said.

“There is still fighting in our city,” echoed a woman from Pervomaisk, in the Luhansk region.

Most of the women got to know the Catholic Church through the assistance they received from Caritas and other charitable organizations that provide drinking water, food packages, hygiene kits and cash assistance.

Taisa, also from Luhansk, lives in the camp with a daughter and grandchildren. With great sorrow she talked about her situation.

“We were not always beggars,” she said. “We had decent lives, jobs, houses. People here sometimes do not understand fully that we lost everything. We even do not know if our houses are still there.”

Eduard, a young father from Donetsk, knows his house was destroyed and his family cannot return. Before the war he was working in the finance office at a railway company in Donetsk. There are no jobs in Kharkiv, however.

Overall, it appears the settlers live like an extended family. In April they jointly celebrated the wedding of a young couple. The groom receives dialysis and needs a kidney transplant.

Despite the cramped conditions, the shelters are well-equipped. There are beds, wardrobes, mattresses, tables, chairs, kitchenware, refrigerators and sanitary facilities. The local government pays for the electricity. The residents do not complain about the conditions.

Their main concern is that they can be asked to leave their temporary housing and that, for the most part, they have nowhere else to go. They were supposed to live in a camp for six months, and the deadline has already passed. Camp administration allowed them to stay for three more months. But eventually they will need to find another place because 1,500 people are on a waiting list.

The United Nations reports that 1.3 million Ukrainians became displaced in fighting between separatist forces and the Ukrainian army. About 200,000 people temporarily moved to the Kharkiv area, near the conflict zone.

PREVIOUS: Christians call for justice in demonstration at Galilee church hit by arson