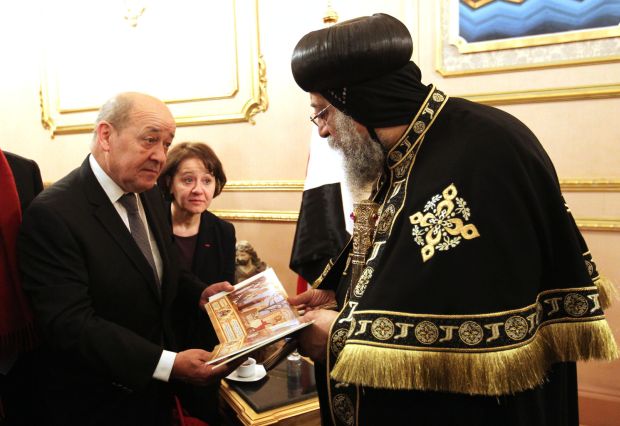 OXFORD, England (CNS) — French Catholics have urged church support for a campaign to stop Western companies from buying oil from Islamic State, in effect funding the mass killing of Christians.

“Our brothers and sisters are being massacred, women and children taken into slavery — and while Christians are suffering most, so are Muslims and other minorities,” said Joseph Thouvenel, vice president of the French Confederation of Christian Workers.

“As Christians, we’re trying to record the names and ages of victims, so they won’t be forgotten. But we also need church leaders to help stop the persecution by reaching out to public opinion and pressing governments to act,” said Thouvenel, a Catholic.

A new association, Nouveaux Martyrs (New Martyrs), prepared a day of action in Paris June 14 to raise awareness of atrocities by Islamic State and other movements.

In a June 4 interview with Catholic News Service, Thouvenel said 84 members of France’s Parliament had signed a New Martyrs petition, demanding a parliamentary inquiry into which French companies had been trading with Islamic State.

He added that the association, which he heads, had gained backing from the pontifical foundation Aid to the Church in Need and said many Catholic clergy and religious had also signed the petition and sent messages of support.

The rally will include prayers and victim testimonies outside the UNESCO building, while the petition, demanding an “urgent official inquiry,” will be delivered to France’s Foreign Ministry.

“Revolted by the appalling plight of Christian populations confronted by the bestiality of these blood-thirsty groups, we demand an assurance from our parliament that not one drop of terrorist petrol is being purchased by French firms,” the petition says.

Thierry Bonaventura, spokesman for the Council of European Bishops’ Conferences, agreed with the need for firm action and said Islamic State brutalities reflected “general degradation in the understanding of religion.”

Islamic State “is not a poor organization — it knows how to manage finances and use the media, and this makes it essential for European governments to do what they can to cut its supplies,” he told Catholic News Service June 3.

“If it’s true Western companies have been buying petrol from it, then something certainly must be done. We can’t condemn IS on one side and help it on the other,” he said.

Formed in 2014, New Martyrs has compiled a list of Christians killed by extremists in the Middle East and Africa, including 148 students shot April 2 by al-Shabab attackers at Kenya’s Garissa University College and 21 Coptic Christians beheaded by Islamic State in Libya.

On its website, New Martyrs said Islamic State was currently earning up to $3 million daily from oil sales to foreign companies, adding that, in May, the European Union’s ambassador to Iraq, Jana Hybaskova, had confirmed the involvement of European Union firms.

New Martyrs said it had urged the French government to investigate the role of French oil concerns and use “every means, including military force,” to prevent trade with Islamic State.

Bonaventura said it was important to remember Islamic State’s killing spree was directed against not only Christians but anyone who failed to support the group.

“Many Christians are dying in the Middle East, but this is a wider persecution, which endangers huge numbers of people,” he told CNS. “The region is right on our doorstep, so we’d like to see European governments take firmer action, particularly if it turns out that Western firms are helping the persecutors.”

NEXT: Canadian commission: Reconciliation with aboriginals to take ‘hard work’