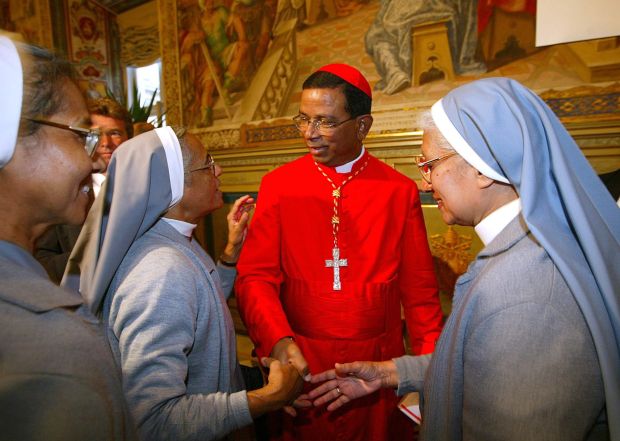 Cardinal Telesphore Toppo talks with nuns at the Vatican in this October 2003 file photo. New Delhi police arrested a man in connection with an early June death threat against the cardinal. (CNS photo/Danilo Schiavella, EPA)

NEW DELHI (CNS) — Police arrested a man in connection with a death threat against Cardinal Telesphore Toppo, archbishop of Ranchi.

Jaya Roy, superintendent of police in Ranchi, in the eastern state of Jharkhand, identified the suspect as Devesh Kumar.

“He will be presented in court today (June 16) and then brought to Ranchi,” Roy told the Asian Catholic news portal ucanews.com.

Cardinal Toppo received a letter early the week of June 8 demanding a payment of $780,000 and threatening death if the amount was not paid.

The letter was sent in the name of the People’s Liberation Front of India, a breakaway faction of the Communist Party of India, although Roy said the suspect has no connection with the organization.

The suspect sent the letter to settle a personal score with a man identified only as Amit, the police official said.

“Kumar mentioned Amit’s name and telephone number in the letter so that Amit would face police investigation and arrest,” Roy said.

He added that police are continuing their investigation.

Cardinal Toppo acknowledged receipt of the death threat, but said he had no idea why any organization would have cause to threaten him.