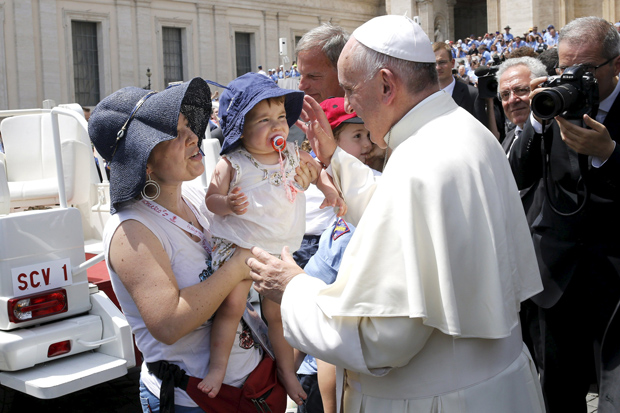 Pope Francis greets a child during an audience with more than 80,000 children and adult members of the Italian Catholic Guiding and Scouting Association in St. Peter's Square at the Vatican June 13. (CNS photo/Giampiero Sposito, Reuters) 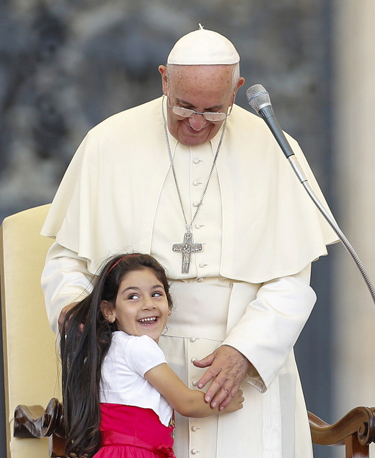 A young girl smiles as she embraces Pope Francis during an audience for families participating in the pastoral conference of the Diocese of Rome in St. Peter’s Square at the Vatican June 14. (CNS photo/Giampiero Sposito, Reuters)

About 1,000 priests attending a retreat organized by the International Catholic Charismatic Renewal Services and Catholic Fraternity met with the pope June 12, the day the church marked the feast of the Sacred Heart of Jesus and the World Day of Prayer for the Sanctification of Priests. The theme of the June 10-14 retreat in Rome was “Called to Holiness for a New Evangelization.”

Before the Mass, the pope first gave an hourlong, off-the-cuff reflection in Spanish, followed by an hour of answering questions from five priests from different continents.

Seated behind a desk in the basilica’s nave, the pope touched on a wide range of topics during the informal exchange, even delivering a number of jokes and wisecracks.

“What’s the difference between priests and bishops?” he asked as he reached past an empty glass to twist open a small plastic bottle of water.

“Priests have to drink water out of the bottle, bishops get a glass,” he said. Someone later handed the Argentine pope a cup of mate with a silver straw as he checked his notes.

When asked what his “secret” was for evangelizing a world that sees the church as “out of date” and rejects its teachings, the pope said never to resort to proselytism, which is “a caricature of evangelization.”

He said Pope Benedict XVI “was very clear” in saying the church grows by “attraction,” that people are drawn to Christ’s love manifest in the spiritual and charitable works of his followers.

The question then becomes, “how do I attract with my witness,” Pope Francis asked, explaining it has to come through in one’s words, gestures and concrete service to the poorest and unwanted in the world.

“Let the Holy Spirit provoke curiosity” in onlookers who see Christians serving the poor, the elderly, the sick, the helpless, he said. Let the onlookers wonder: “Why are they doing this?” “Are they crazy?” Let them wonder why Christians spend their lives on the very people others have thrown away, he said.

The pope said it was important to help the suffering without disparaging them. Feelings of contempt toward those who suffer or sin is not evangelical and it “creates class war” — a war between mercy and rigid “doctors of the law.”

Priests can be tempted by power and money, and once the devil has come in “through the wallet,” vanity and the sin of pride are quick to follow.

He told priests to be gentle and tender with their flock, like Jesus, and “to love in every circumstance.”

He said it “makes me sad” to see a priest refuse to baptize the infant of a parent who may be unmarried or remarried. The priest “has no right. Baptism is not to be denied,” he said.

“What are we? Puritans?” he asked. “Please, a church without Jesus and without mercy — no.”

Do not “terrorize” the faithful, he said; “Don’t make them run away.”

The pope also urged bishops and priests not to be afraid of arguments either among themselves or with the faithful.

“Be a man” and speak directly and frankly with the person concerned, he said. A church without any quarrels is “dead” and the only place on earth where there is no fighting is a cemetery, he said.

He praised the role of women in the church as they express a special form of collaboration. The church is feminine, he said, as bride and mother.

Priests need to show the church is a loving mother with a love that “transforms and is contagious” and avoid becoming a “bureaucrat,” who works from 9 to 5 or who has become too strictly tied to the letter of the law.

He urged priests to end their day, not by lounging in front of the television, but by “visiting your friend,” Jesus, in the tabernacle.

Don’t worry about falling asleep before the Blessed Sacrament, he said. Just “let him look at us,” like a father watching his child sleep. “Don’t worry. Let him watch you.”

He said people can tell when a priest is in love with Jesus, and lets his heart be filled with his mercy and tenderness, a theme he returned to in his homily.

The pope focused on the reading from the Book of Hosea (11:1-9), in which God speaks of the infinite and unconditional love he has for his sinning and stubborn children.

Despite their folly, he does not give vent to his “blazing anger” because he is not man, but God, who has chosen to come down to the people and save them, he said.

This is a God who stoops to feed, embraces, teaches children how to walk and draws people near “with bands of love, not punitive laws,” he said.

The problem is, he said, too many people are afraid of God’s tenderness and they don’t let themselves be filled and overcome by it.

Priests who don’t let themselves experience God’s tenderness often are “hard, severe, castigators,” the pope said. “We are priests without tenderness.”

When the Good Shepherd finds his lost sheep, “he doesn’t hit, he doesn’t scold, he takes it in his arms and embraces it and takes care of it because it was wounded. Do you do the same thing with your faithful?”

Remember God’s tenderness, he said, be moved by it and imitate Jesus, who says, “When you are alone, confused, lost, come to me, I will save you, I will console you.”

PREVIOUS: Pope urges Scouts to be active, not just ‘decorative,’ in parish life

NEXT: Indian police arrest suspect in death threat against cardinal