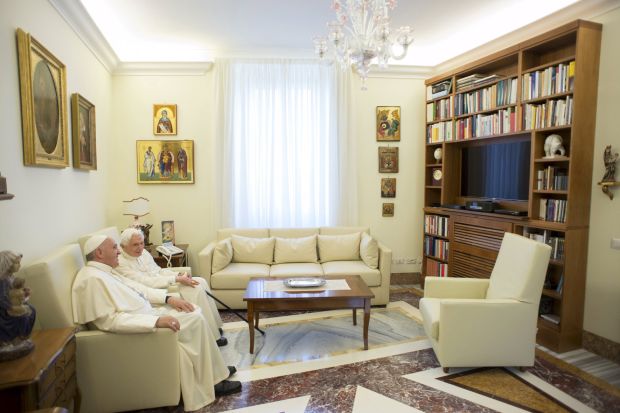 Pope Francis chats with retired Pope Benedict XVI during a meeting at the Vatican June 30. (CNS photo/L'Osservatore Romano via Reuters )

After a 30-minute visit from Pope Francis, the retired pope then headed off to the traditional papal summer residence of Castel Gandolfo outside of Rome. It was the first time the retired pope returned to the villa since spending about two months there after he resigned in early 2013.

The 88-year-old retired pope is expected to remain at the summer villa just two weeks, until July 14. Before he resigned, Pope Benedict, like many of his predecessors since the early 1600s, spent a large portion of the summer months at the 135-acre papal villa to escape Rome’s oppressive heat.

Pope Francis, however, who — even as archbishop of Buenos Aires — is not known to take a full vacation, lightened his schedule just a bit for July.

He will still hold his Angelus prayer and address every Sunday; however, there will be no Wednesday general audience for all of July, said Jesuit Father Federico Lombardi, Vatican spokesman. The general audience will resume in August in the Vatican’s solar-powered and air-conditioned Paul VI hall.

For the month of July, all audiences with the pope are expected to be suspended — except a meeting with members of the Catholic charismatic renewal movement in St. Peter’s Square July 3.

Pope Francis will not invite groups of Catholics to his residence, the Domus Sanctae Marthae, for his early morning Mass throughout July and August.

Despite the somewhat reduced schedule for July, the 78-year-old pope will visit Ecuador, Bolivia and Paraguay July 5-12, returning to the Vatican July 13.

He will visit at least seven cities and villages, whose altitudes range from 35 meters (116 feet) to 3,800 meters (12,500 feet) above sea level, and deliver 22 speeches, homilies and greetings. Millions of people are expected to attend the more than 37 scheduled events.