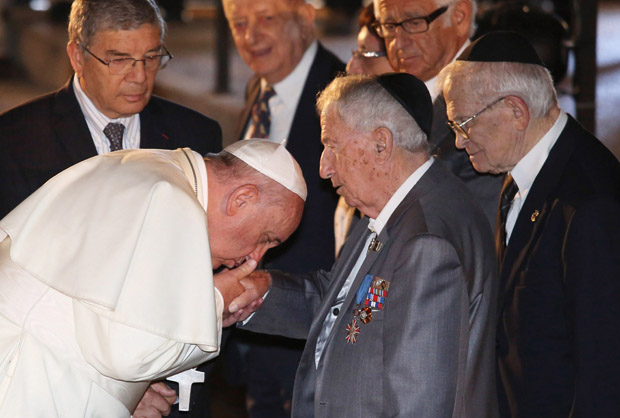 Pope Francis kisses the hand of a man during a ceremony in the Hall of Remembrance at the Yad Vashem Holocaust memorial in Jerusalem May 26, 2014. The pope honored the 6 million Jews who perished at the hands of the Nazis during the Holocaust. (CNS photo/Abir Sultan, EPA)

VATICAN CITY (CNS) — Jews and Catholics are “strangers no more, but friends, and brothers and sisters,” thanks to the “authentic fraternal dialogue” between the two religions since the Second Vatican Council, said Pope Francis.

The pope held an audience at the Vatican June 30 with participants of an international conference, organized by the International Council of Christians and Jews.

The June 28-July 1 conference was in Rome to commemorate the 50th anniversary of “Nostra Aetate,” the Vatican II declaration that addressed the relations of the Catholic Church with other religions. The theme of the event focused on the 50th anniversary and looked at “The Past, Present, and Future of the Christian-Jewish Relationship.”

Reflecting on “Nostra Aetate,” Pope Francis said it “represents a definitive ‘yes’ to the Jewish roots of Christianity and an irrevocable ‘no’ to anti-Semitism.”

The declaration, he said, has brought about “rich fruits” of “friendship and mutual understanding” in the past 50 years and provides a “solid basis” for dialogue to be “developed yet further.”

“Our fragmented humanity, mistrust and pride have been overcome thanks to the Spirit of Almighty God, in such a way that trust and fraternity between us have continued to grow,” the pope said. “And he, in his infinite goodness and wisdom, always blesses our commitment to dialogue.”

He also said the Vatican’s Commission for Religious Relations with the Jews, founded in 1947, follows the activities of the international council “with great interest,” especially the annual international conferences, which “offer a notable contribution to Jewish-Christian dialogue.”