Pope urges Scouts to be active, not just ‘decorative,’ in parish life 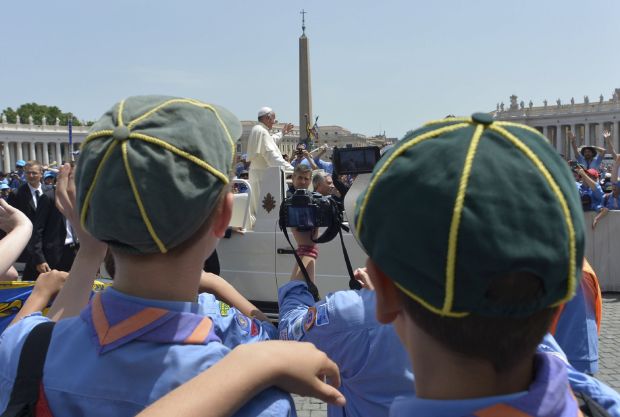 Pope Francis waves as he arrives to lead an audience with more than 80,000 children and adult members of the Italian Catholic Guiding and Scouting Association in St. Peter's Square at the Vatican June 13. (CNS photo/L'Osservatore Romano via Reuters)

VATICAN CITY (CNS) — More than a “decorative presence” at large parish functions, Catholic Scouts and Guides are called to contribute fervor to the evangelizing mission of the church by building bridges through dialogue, said Pope Francis.

More than 80,000 children and adult members of the Italian Catholic Guiding and Scouting Association gathered under the hot sun in St. Peter’s Square June 13 for a short but festive rally with Pope Francis.

He urged the members to “build bridges” in a society “where there is the habit of creating walls.”

Scouting can bring to the church “a new capacity for dialogue with society,” he said, but only if groups do not lose contact with their local parishes, where they are based.

“You are called to find a way to integrate yourselves in the pastoral life of the local church, establishing relationships of esteem and collaboration at every level, with your bishops, pastors and other priests, with the educators and members of other church associations present in the parish and in the same territory; and do not satisfy yourselves with a ‘decorative’ presence on Sundays or on big occasions,” he said.

The pope said Scouting is based on “great human values, contact with nature … and faith in God,” and makes an “important contribution to families and their educational mission.”

He noted that religion has been a fundamental aspect of Scouting since its origins. There is not “a religious side” and a non-religious side to Scouting, he said. Rather, the movement is “based on religion, that is, on the awareness of God and his service,” he said, citing the founder Lord Baden Powell.

The pope said the Scouting movement is a “precious part of the church in Italy” and urged Scouts and Guides to “always feel part of the great Christian community.”

PREVIOUS: Pope says Christians must guard their hearts from noise of this world

NEXT: Share God’s mercy with the unwanted, pope tells priests