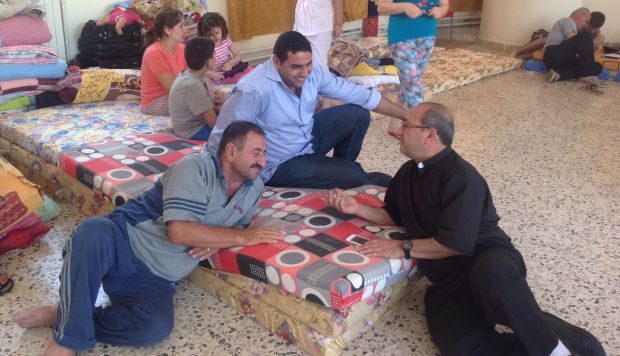 MARKA, Jordan (CNS) — Hearing a beloved voice, a little boy hurriedly hobbled down the pale stone steps of the church hall to greet the priest with a tender hug.

Father Khalil Jaar chuckled when he saw the sandy-haired child, Misho, playing dress-up by wearing one of his mother’s brown high-heeled boots on his right foot while sporting his father’s black plastic sandal on the other.

Misho and his parents are among the 600 Iraqi and Syrian refugee families Father Jaar has been serving with the love of Christ and practical help such as food, housing and educational assistance in this eastern suburb of Amman, the Jordanian capital, where those fleeing conflict in neighboring lands have found shelter.

For Father Jaar, the daily experience of his church hosting a dozen Iraqi Christian families — about 60 people — who fled Islamic State attacks last August, has deeply affected his own spiritual journey.

This Arab priest finds his own life has been forever changed by aiding the refugees.

“They have become my family,” he said. “I am living with saints. They left everything for the Lord,” he said of the Iraqi Christians who were forced out of their ancestral homelands of the past 16 centuries by Islamic State brutality and now shelter in his parish, Our Lady Mother of the Church.

“I am so happy. We are like a real family,” said the soft-spoken, energetic diocesan priest, who himself experienced early life as a Palestinian refugee.

Father Jaar recounted a recent visit by his bishop from Jerusalem to illustrate his point.

“The bishop looked at my office and told me, ‘This is strange. There are no pictures of saints on the walls,'” he told Catholic News Service.

Father Jaar told him, “I have a picture of my mother who died last year.”

“Yes, but you need …,” the bishop started to say, until the priest interjected.

“No, I don’t need pictures because I am living with saints,” he responded.

“These people left everything in the world — houses, cars, factories, money — just to remain Christian. What do you call these kinds of people? Saints. So I don’t need images as long as I am living with such people,” Father Jaar said.

“I tell them: Thank you for what you have given to me.”

Sharing meals together, starting an informal school for the refugees and seeing them take up income-generating projects has transformed the priest’s life and challenged his own spiritual walk.

“As a priest, I live like an aristocratic. My food is ready, my house is clean. If I need something, I go to my bishop or church. These people almost have nothing and they are always happy,” he said.

“They gave me a very basic lesson to feel and to live with the other. And to always say, ‘Thank you, God!’ They are better than so many people that have so much more.”

Recognizing the priest’s work, Pope Francis commissioned him to travel in the spring to Colombia, Mexico and San Diego to share stories of the plight of Christians caught in the crosshairs of Mideast conflicts and Islamist extremists with a call to stand beside them and provide help in their hour of need.

“It’s a privilege to be here and assist these people. We are living in a very crucial moment in history. … Either you go for the good or for the bad. The key is to resist the bad and not to respond in the same way. But to be witnesses of love and reconciliation,” Father Jaar explained.

Father Jaar was able to register 60 Iraqi refugee children in the Jordanian school system last year, but felt that he needed to establish an informal school to teach 320 Iraqi refugee children on the church grounds. The Jordanian government said their late arrival last September after escaping Islamic State oppression meant missing the academic year and Father Jaar did not want them to lose out on their another year of schooling.

He is now working to have the school program certified by both the Jordanian and Iraqi ministries of education for the coming academic year.

Father Jaar also has encouraged refugees to take up income-generation projects. He shops for colorful beads and string in Amman’s bazaar; the refugees transform them into delicate bracelets, some adorned with silver plastic crosses for women, and friendship bracelets sporting the colors of Jordan’s national flag of red, white, black and green. A popular summertime flea market in the capital has given them a free table to sell their goods.

Meanwhile, a 12-year-old Iraqi Christian boy named Fadi has shown a talent far beyond his years for painting religious icons. Father Jaar said the boy’s family is now living from what he sells.

But the biggest concern facing Father Jaar is providing food for the refugees and having funds to pay apartment rents.

“The challenge now is to provide food for them daily because the money they had when they came from Iraq is almost finished,” he said.

Father Jaar has organized a coupon system so families can purchase food, rather than organize a food distribution program.

“It’s better for the children to see their father pay using the coupons rather than having the priest deliver food. This preserves the dignity of the father,” the priest said.

The church is giving coupons worth $70 per month to 100 refugee families as well as providing dinners four times a week for 150 refugees.

Funds for the program have come from local parishioners and $56,000 from the pontifical foundation Aid to the Church in Need. Caritas Internationalis provides medical aid. But more help is needed as the crisis deepens in Iraq and Syria with no end is in sight.

Working with the refugees has opened up opportunities for God’s miracles to happen, in Father Jaar’s view.

“A Jordanian man came yesterday and said, ‘Father, I sold my house. We are going to live in London. Could you accept this gift for the refugees?’ the priest said.

“When I am in a difficult situation, I say, ‘Lord, please take care of your children. They are your children, not mine. I am the administrator for you.'”

NEXT: Want to end hunger? Change your life, pope says