Pope pushes Putin to work for peace in eastern Ukraine 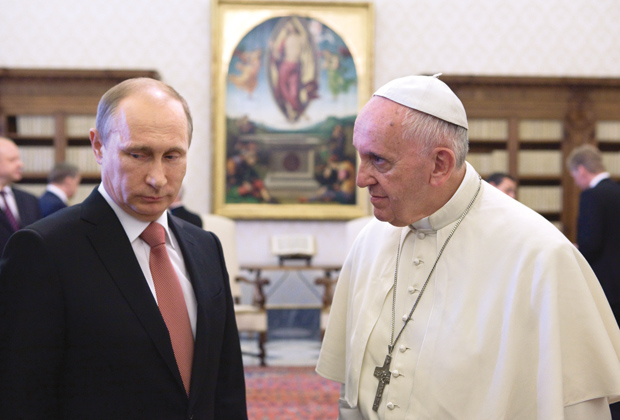 VATICAN CITY (CNS) — When Pope Francis met Russian President Vladimir Putin at the Vatican June 10, the ongoing crisis in eastern Ukraine was the principal topic of their conversation and was a concern for many others as well.

Putin arrived at the Vatican more than an hour late, beating the 45-minute tardiness he chalked up in November 2013, the last time he visited the pope. Pope Francis and Putin spoke privately, aided by interpreters, for 50 minutes before the Russian president introduced the members of his entourage, including Foreign Minister Sergei Lavrov.

“The meeting was dedicated principally to the conflict in Ukraine and to the situation in the Middle East,” said Jesuit Father Federico Lombardi, Vatican spokesman.

“The Holy Father affirmed the need for a commitment to a sincere and serious effort to reach peace and there was agreement on the importance of restoring a climate of dialogue” and on adhering to the promises made in the cease-fire agreement, Father Lombardi said.

The “serious humanitarian situation” in eastern Ukraine also was discussed, the spokesman said, as was the need to assure humanitarian workers have access to the region.

In March 2014, Russia annexed the Crimea region of Ukraine and about a month later fighting began along Ukraine’s eastern border with Russia. Although Putin denied it, there were widespread reports that Russia not only was supporting separatists in the region, but that Russian troops had crossed into Ukraine.

Hostilities reportedly have eased since an internationally mediated cease-fire agreement was signed in mid-February, but the fighting has not stopped.

A report June 1 from the U.N. Office of the High Commissioner for Human Rights said, “Between mid-April 2014 and May 30, 2015, at least 6,417 people, including at least 626 women and girls, have been documented as killed and 15,962 as wounded in the conflict zone of eastern Ukraine. This is a conservative estimate and the actual numbers could be considerably higher.”

Father Lombardi said the pope and Putin also spoke about the continuing crises in the Middle East, particularly in Syria and Iraq, and the need for the international community to find ways to promote peace and protect “all components of society, including religious minorities, especially Christians.”

Exchanging gifts, Putin gave Pope Francis a cushion embroidered with gold thread; the design was of Moscow’s Cathedral of Christ the Savior, which Putin explained had been “destroyed in the Soviet era,” but has been rebuilt.

Pope Francis gave Putin a medallion of the “‘Angel of Peace,’ who,” he said, “defeats all wars and speaks of solidarity among peoples.”

The pope also gave the Russian president a copy of the apostolic exhortation “Evangelii Gaudium” (“The Joy of the Gospel”), which the pope said, “has many religious, human, geo-political and social reflections.”

Ukrainian Catholic Major Archbishop Sviatoslav Shevchuk of Kiev-Halych told reporters June 9 he had written to Pope Francis ahead of the meeting, asking him to “be the voice of the Ukrainian people, its children, all the Catholic believers in Ukraine who suffer.”

Until now “no one — neither diplomacy nor the systems of international security nor the leaders of this world — have been able to stop the war,” he said. “We are hopeful that the pope can do what has been impossible.”

Ken Hackett, U.S. ambassador the Holy See, was asked June 10 about the U.S. government’s view of the meeting.

“We would like to see the Vatican … continue to express its concern particularly about what’s happening in the Ukraine,” the ambassador told reporters at his residence. “Maybe this is an opportunity where the Holy Father privately could raise concerns.”

“We think they could say something more about concern for territorial integrity, those types of issues,” the ambassador said. “It does seem that Russia is supporting the insurgents and does seem that there are Russian troops inside Ukraine.”

For the first time since 1998, the leaders of the world’s most industrialized countries — the so-called G-7 — held a summit in June 2014 and excluded the Russian president, citing the invasion of Crimea. They renewed their exclusion of Putin this year when the G-7 leaders met June 7-8 in Germany.

“This is a very serious situation and I believe that the G-7 has pretty well decided that they are going to continue the sanctions because we have not seen the adherence to the Minsk agreements” for a cease-fire, Hackett said.

NEXT: Priest in Jordan ministering to refugees believes he’s living with saints