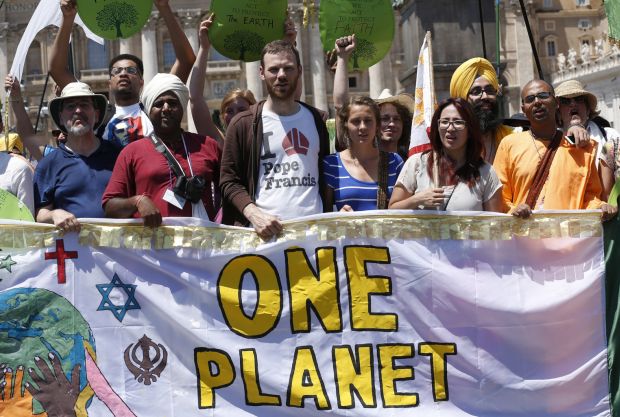 Environmental activists hold a banner as they pose for photos after attending Pope Francis' Angelus at the Vatican June 28. Some 1,500 people marched to the Vatican in support of Pope Francis' recent encyclical on the environment. (CNS photo/Paul Haring) 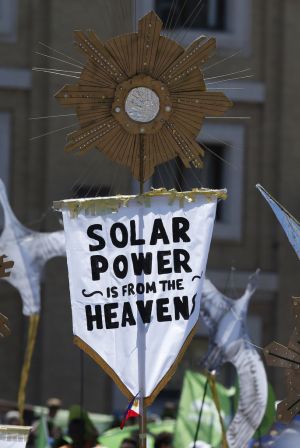 Banners held by environmental activists are seen in St. Peter’s Square at the Vatican June 28. Some 1,500 people marched to the Vatican in support of Pope Francis’ recent encyclical on the environment. (CNS photo/Paul Haring)

VATICAN CITY (CNS) — Environmentalists from around the world and from different faiths were among the tens of thousands of pilgrims gathered for the Angelus with Pope Francis June 28.

They marched a little more than a mile through Rome’s city center, ending in St. Peter’s Square, to demonstrate their support for the pope and his encyclical on the environment, “Laudato Si’, on Care for Our Common Home,” published just 10 days earlier. Once in the square, they gave other pilgrims there leaf-shaped posters with excerpts from Laudato Si’, as well as quotes on care for creation from other religious leaders.

The march was endorsed by the United Nations and a number of Catholic organizations, including Catholic Action and the Global Catholic Climate Movement; the theme was “One Earth, One Human Family.” Marchers also urged the adoption of a new global climate change agreement at the U.N. conference in Paris in December.

Pope Francis greeted the marchers after the Angelus prayer, encouraging “collaboration among people and associations of different religion for the promotion of an integral ecology.” 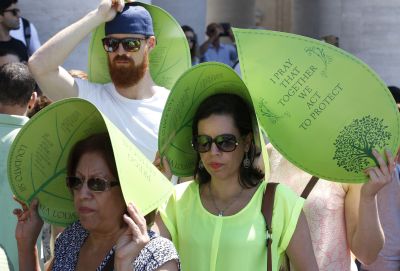 Tourists shield themselves from the sun with leaf-shaped posters received from environmental activists in St. Peter’s Square at the Vatican June 28. Some 1,500 people marched to the Vatican in support of Pope Francis’ recent encyclical on the environment. (CNS photo/Paul Haring)

On the heels of this conference, the Pontifical Council for Justice and Peace and the Catholic International Cooperation for Development and Solidarity were also to hold a conference on the encyclical in Rome, July 2-3.

NEXT: Pope cites growing trust among Jews and Christians