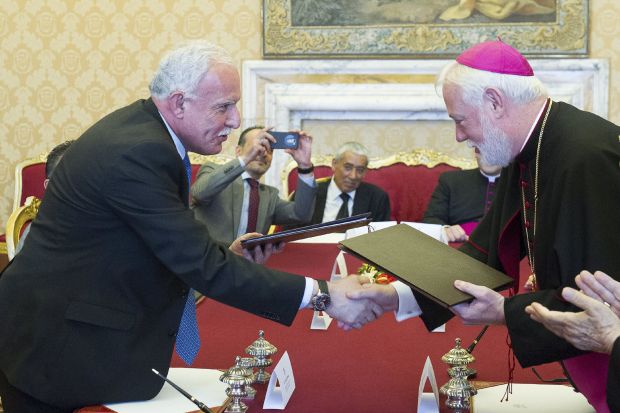 Archbishop Paul Richard Gallagher, right, secretary for relations with states within the Holy See's Secretariat of State, and Palestinian Foreign Minister Riyad al-Malki, shake hands during a meeting at the Vatican June 26. The Vatican signed its first treaty with the "State of Palestine" on Friday, calling for "courageous decisions" to end the Israeli-Palestinian conflict with a two-state solution. (CNS photo/L'Osservatore Romano via Reuters)

VATICAN CITY (CNS) — The Holy See and Palestine have signed a historic agreement that supports a two-state solution to the ongoing conflict in the Holy Land, based on the 1967 borders between Israel and Palestine.

The two parties signed the “Comprehensive Agreement between the Holy See and the State of Palestine” at the Vatican June 26. The accord, which includes a preamble and 32 articles, focuses mostly on the status and activity of the Catholic Church in Palestine. It assures the church “juridical recognition” and “guarantees” for its work and institutions in Palestine.

The second chapter of the agreement focuses entirely on freedom of religion and conscience and includes the right to worship and practice one’s faith, as well as the rights of Christian parents to give their children religious education, of Christians to take holy days off work, and of military personnel to have access to pastoral care.

The preamble recognizes the right to self-determination of the Palestinian people, the importance of Jerusalem and its sacred character for Jews, Christians and Muslims, and the objective of a two-state solution.

At the signing ceremony, Archbishop Paul R. Gallagher, the Vatican’s secretary for relations with states, said he hoped the agreement would provide a “stimulus” for a “definitive end to the long-standing Israeli-Palestinian conflict.”

“I also hope the much desired two-state solution may become a reality as soon as possible,” the archbishop said. He said the peace process could only move forward if it were “negotiated between the parties,” along with the support of the international community.

In his address, Palestine Foreign Minister Riad al-Malki, underlined that the agreement supports the two-state solution based on Israel and Palestine’s 1967 borders.

He said the agreement includes “new and unprecedented provisions related to the special status of Palestine as the birthplace of Christianity” and cradle of monotheistic religions.

The agreement comes at a time of “extremism, barbaric violence and ignorance” in the Middle East, noted al-Malki, adding that Palestine was committed to combat extremism and to promote tolerance, human rights and religious freedom. The latter are values that “reflect the beliefs and aspirations of the Palestinian people,” he said.

Archbishop Gallagher said the agreement was a “good example of dialogue and cooperation,” which he said he hopes can “serve as a model for other Arab and Muslim-majority countries.”

The “Comprehensive Agreement” follows up on the “Basic Agreement,” signed in 2000, between the Holy See and the Palestinian Liberation Organization and was the result of years-long bilateral negotiations.

“For the first time, the agreement includes an official recognition by the Holy See of Palestine as a state,” noted al-Malki in his speech.

Passionist Father Ciro Benedettini, a Vatican spokesman, told Catholic News Service the agreement is not the first time the Vatican recognizes Palestine as a state.

Israel’s Ministry of Foreign Affairs issued a statement June 26, saying it regretted the Holy See’s recognition of Palestine as a state, calling it a “hasty step” that “damages the prospects for advancing a peace agreement, and harms the international effort to convince” Palestine “to return to direct negotiations with Israel.”

The ministry also expressed regret for the “one-sided texts in the agreement which ignore the historic rights of the Jewish people in the Land of Israel and to the places holy to Judaism in Jerusalem.”

“Israel cannot accept the unilateral determinations in the agreement which do not take into account Israel’s essential interests and the special historic status of the Jewish people in Jerusalem,” the statement said. The ministry said it would study the agreement and “its implications for future cooperation between Israel and the Vatican.”

The day before the signing, Pope Francis met with a delegation of B’nai B’rith International, a Jewish organization that seeks to serve the Jewish community and defend against anti-Semitism.

During their meeting at the Vatican, the pope expressed gratitude for the “great progress” made between the Catholic Church and the Jewish community since the Second Vatican Council.

He said Jews and Christians were “called to pray and work together for peace” and “for the good of the peoples.”

“Respect for life and creation, human dignity, justice and solidarity unite us for the development of society and for securing a future rich in hope for generations to come.”

NEXT: Pope to archbishops: Be brave, convincing witnesses for church