Pope to archbishops: Be brave, convincing witnesses for church 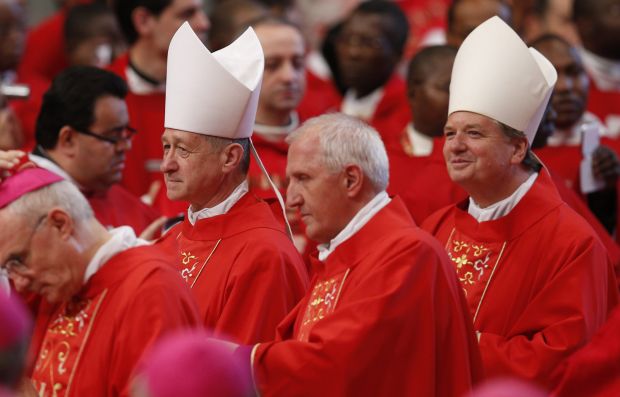 Archbishops Blase J. Cupich of Chicago, left, and Anthony Fisher of Sydney, right, arrive in procession for Mass marking the feast of Sts. Peter and Paul celebrated by Pope Francis in St. Peter's Basilica at the Vatican June 29. In a departure from a 32-year tradition, the pope did not confer palliums to the 46 new archbishops in attendance. The actual imposition of the pallium will take place in the archbishop's archdiocese. (CNS photo/Paul Haring)

VATICAN CITY (CNS) — The church wants pastors who are unafraid of persecution, are angels of hope and charity, and are convincing witnesses with a life rooted in prayer and the Gospel, Pope Francis told new archbishops.

“It’s quite simple, because the most effective and authentic witness is one that does not contradict, by behavior and lifestyle,” what one preaches and teaches, he said during a Mass celebrating the feasts of Sts. Peter and Paul June 29.

Forty-six archbishops representing 34 countries, who were named over the course of the last year, were invited to come to Rome to concelebrate the feast day Mass with Pope Francis.

This year, however, the pope set aside an element that had been part of the Mass for the past 32 years, by no longer conferring the pallium on new archbishops during the liturgy.

The archbishops were to be present for the pope’s blessing of the palliums in order to underline their bond of unity and communion with him. But the actual imposition of the woolen band was to take place in the archbishop’s archdiocese in the presence of his faithful and bishops from neighboring dioceses.

The change was meant to better “highlight the relationship of the metropolitan archbishops with their local churches, giving more faithful the possibility of being present for this significant rite,” Msgr. Guido Marini, papal master of liturgical ceremonies, said in January.

During his blessing of the palliums, Pope Francis said the woolen bands that will be worn over their shoulders symbolize the “yoke” of the Gospel as well as their call to be shepherds dedicated to the pastoral care of their people. 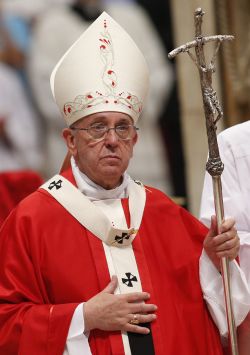 During his homily, the pope said the first reading from the Acts of the Apostles recalled the harsh persecution faced by the early Christians.

“However, I do not wish to dwell on these atrocious, inhuman and incomprehensible persecutions, sadly still present in many parts of the world today,” often happening right in front of everyone’s eyes and meeting with complete silence, he said.

Instead, the pope said he wanted to “pay homage to” these courageous Christians who evangelized fearlessly in a pagan culture; they are, he said, models for Christians today, and a “powerful call to prayer, to faith and to witness.”

A church rooted in prayer is strong, solid and moves forward, while Christians who pray are protected and never alone, he said.

It is through prayer that believers express their faith and trust in God, and directly experience his closeness, especially when he sends angels of hope, the pope said.

“How many angels he places on our path” to offer comfort, aid and enlightenment, he said; yet fear, skepticism and distractions, or “euphoria” keep people from recognizing them or letting them into their life.

The early Christians call people today to be people of faith, who understand that God does not remove people from the world or evil, “but he does grant them the strength to prevail.”

“How many forces in the course of history have tried, and they still do, to destroy the church, from without as well as within, but they themselves are destroyed and the church remains alive and fruitful,” the pope said.

“Only God remains,” while everything else — like, empires, cultures, ideologies and nations — passes.

“The church does not belong to popes, bishops, priests or the lay faithful; the church in every moment belongs solely to Christ,” he said, and this is how, despite the many “storms” in time and sins of its members, the church is able to remain “ever faithful to the deposit of faith shown in service.”

It is by acting only in the name of Christ, not on one’s own behalf, that Christians have shown that no power can defeat those who have the power of faith, he said.

“Only the one who lives in Christ promotes and defends the church by holiness in life, after the example of Peter and Paul,” he said.

In fact, the call to be firm witnesses is key, the pope said, because without witness, the church and its members are sterile and dead — “like a dried up tree that produces no fruit, an empty well that offers no water.”

Evil is overcome by “the courageous, concrete and humble witness,” he said.

Pope Francis then told the archbishops that he hoped the pallium, which is meant to symbolize both their unity with pope and their authority and responsibility to care for the flock entrusted to them, would also remind them of this call to prayer, faith and witness.

“The church wants you to be men of prayer,” faith and witness, who can show people that “liberation from all forms of imprisonment is uniquely God’s work and the fruit of prayer” as well as teach people “to not be frightened of the many Herods” who persecute them.

“For those most in need, may you also be angels and messengers of charity,” the pope told the new archbishops.

The pope asked that they be courageous, “convinced and convincing” witnesses, whose lifestyles matched the Gospel message and their preaching, and who “are not ashamed of the name of Christ and of his cross, not before the roaring lions, or before the powers of this world.”

As is customary, an Orthodox delegation from the Ecumenical Patriarchate of Constantinople attended the Mass for the feast of Sts. Peter and Paul, the patrons of the Vatican and the city of Rome.

After the liturgy in St. Peter’s Basilica, Pope Francis walked side-by-side with Metropolitan John of Pergamon, head of the delegation, down the stairs under the main altar to pray together over St. Peter’s tomb.

NEXT: St. Therese’s parents to be first married couple canonized together