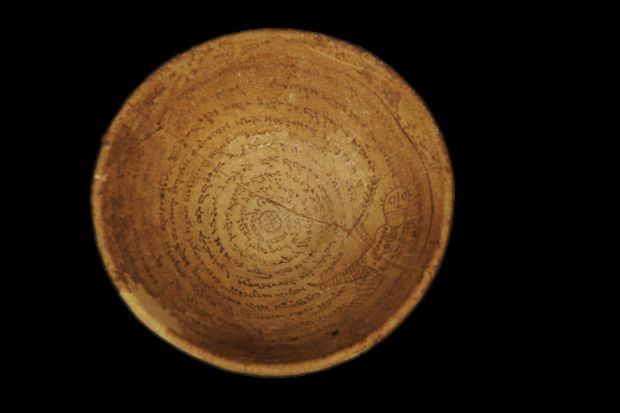 WASHINGTON (CNS) — Sitting in the May Gallery in the John K. Mullen of Denver Memorial Library at The Catholic University of America in Washington, one can feel immersed in 19th-century Syriac Christian life.

Held every four years since 1991, the North American Syriac Symposium brings together university professors, graduate students and scholars from around the country and abroad to discuss topics related to the language, literature and cultural history of Syriac Christianity. Catholic University is the only university to host the symposium twice.

Aaron Butts, an assistant professor in the Department of Semitic and Egyptian Languages and Literatures, told Catholic News Service the university “has a huge collection” of artifacts from Msgr. Henri Hyvernat that makes it “a great place to have the conference. You have all these original artifacts that just add an element that if you had the conference at another university, you wouldn’t have.”

Those artifacts include manuscripts, photographs and an incantation bowl.

In 1897 Msgr. Hyvernat was the first professor appointed to the faculty at Catholic University. The French-born priest traveled throughout the Middle East and was such a great supporter of Syriac studies that he founded the Department of Egyptian Semitic Languages and Literature and its Institute of Christian Oriental Research.

According to Butts, he was “a fixture at the university. That’s why they call him ‘The Grand Old Man of the University’ as a term of endearment. He left a big mark.” Msgr. Hyvernat was at the school for 52 years.

The artifacts on display come from a single trip he took to the Middle East and are from a specific region. They provide “a snapshot of one time and one place” in the Eastern Christian tradition, said Butts. The exhibit was curated by Monica Blanchard, who is curator on the staff of the Semitics department and its institute.

One item is an incantation bowl, which 19th-century Syriac Christians would use by writing a magic spell on the inside and then placing it in their doorway, believing that it would keep the evil spirits out. Such bowls were used in the same way in the Jewish tradition during the same time period.

A couple hundred incantation bowls still exist; only two of them are in the United States.

Also on display is a large number of 19th-century manuscripts of Syriac Christians such as liturgical texts, monastic texts and homilies. Included is a book of the hymns of St. Ephrem the Syrian, a fourth-century deacon who was a prolific Syriac-language hymnographer and theologian.

The collection is “representative of what you might find in a Syriac church in the Middle East,” Butts explained.

“Christianity, even from its beginning, was focused around the Mediterranean, and quickly spread everywhere through what we now call the Middle East, but there were Syriac Christians in what is today Iraq, Syria and Egypt very early on, so we cannot lost sight of the diversity of the Christian tradition,” he said. “These are equally valid expressions of the Christian tradition.”

He added, “This diversity should be celebrated, and not tried to be squashed.”

Butts said everyone can benefit from the exhibit, whether they have no knowledge of the Syriac tradition or are specialists in the field.

“We had a number of people come over from the conference and just study the manuscripts for days. And for the nonspecialists, there are all sorts of little interesting tidbits,” he said.

The artifacts, according to Butts, are part of the Christian tradition, as well as the human tradition. “Christians have been in the Middle East for almost 2,000 years, and have been living in close proximity to Muslims for almost a thousand years,” he said. “I think what this conference did was at least show that the Syriac heritage is an important part of the broader humanistic heritage.”

It’s part of the world experience, he added.

“Many of them have been killed (or) driven out of the Middle East,” he adding, making the need to preserve their heritage even more important.