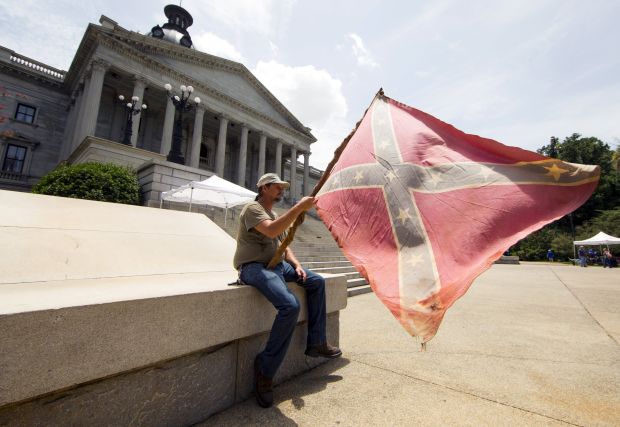 A man holds a Confederate flag outside the Statehouse in Columbia, South Carolina, July 9, hours before Gov. Nikki Haley signed a bill to remove the flag from Statehouse grounds. (CNS photo/Jason Miczek, Reuters)

COLUMBIA, S.C. (CNS) — The Confederate flag will no longer fly on the grounds of the South Carolina Statehouse, and people of faith pray the decision brings an era of racial healing to the state.

Members of the state House of Representatives followed the example of the state Senate and voted to remove the flag in the early morning hours of July 9 after more than 13 hours of emotional debate.

Calls to remove the flag, long a point of controversy, reached a fever pitch after the June 17 shooting of nine people at Emanuel African Methodist Episcopal Church in Charleston. Dylann Roof, 21, the alleged gunman, posed for photos with the flag and expressed white supremacist views prior to the shootings.

“It’s a good decision on the part of the Legislature,” he said. “I think people will see this as a catalyst for healing on the part of those who have suffered so much. It offers a sense of hope for the future that we can move ahead and achieve the kind of racial harmony we’ve all been searching for.”

Bishop Guglielmone urged people on both sides of the flag issue to pray and discuss the topic with respect and civility.

The flag’s July 10 removal will end more than 50 years on the Statehouse grounds. South Carolina legislators first voted to fly it from the Capitol dome in 1961 to commemorate the centenary of the Civil War, and it remained there for decades.

Eventually, the banner was removed from the top of the dome by legislative compromise in 2000, and it was placed on a flagpole on the grounds instead. Many African-Americans and others protested its continued presence as a symbol of racial prejudice, and the NAACP started an economic boycott of the state. Flag supporters, meanwhile, have always maintained that it symbolizes Southern heritage, not hate.

Father Jay Scott Newman, pastor of St. Mary Parish in Greenville, called the flag vote “wise, prudent and just,” but urged people not to use its removal as an excuse to forget the state’s history.

“There must be no attempt to falsify history or ignore the complicated story of our past,” he said. “We would do well to find constructive ways both to honor the sacrifices of those who came before us, both black and white, and to teach the next generation about their successes and failures. We should find appropriate ways to acknowledge and explain all of the Confederate flag’s many meanings to the people of South Carolina.”

Father Dennis B. Willey, pastor of Sacred Heart Church in Charleston, said the flag belongs in a museum.

“A flag on a pole becomes a living, breathing, moving symbol, and that doesn’t belong on state-supported property,” he told The Catholic Miscellany, newspaper of the Diocese of Charleston. “The state should maintain a record of history, but it should be static. I’m happy to see it come down.”

Moving the flag may be the first step on what many see as a long road to equality and justice in South Carolina, said the Rev. Brenda Kneece, president of the South Carolina Christian Action Council.

“I’m eager to see a new day in South Carolina, but that won’t come until we do things like expand health care coverage and fully fund quality education,” Rev. Kneece said. “I do believe we have the potential to start that journey in a way that we have not had since that flag was erected.”

“Taking down the flag can be the beginning of unity in our state,” said Kathleen Merritt, director of the Office of Ethnic Ministries for the Diocese of Charleston. “It gives us hope for a bright cohesive future. Perhaps now continuing discussions can be held and action taken to address the root causes of racism, poverty and economic disparity.”

The flag vote was a moment of grace for Sister Roberta Fulton, a Sister of St. Mary of Namur and principal of St. Martin de Porres School in Columbia.

“It had to be the Holy Spirit working that made so many people with varied opinions come together to vote to bring it down,” she said. “I thank God for this new moment, because growing up as an African-American in South Carolina, the flag was a reminder to me of slavery. I can’t put that aside.”

Sister Roberta prayed all day while listening to the ongoing debate in the House.

“I prayed God would help us as a nation to continue to work together and see we are indeed sisters and brothers in Christ,” she said. “Sometimes out of death there is new life, and maybe now we can continue to work for peace, unity and love.”