Death penalty protests bring together families of victims, the executed 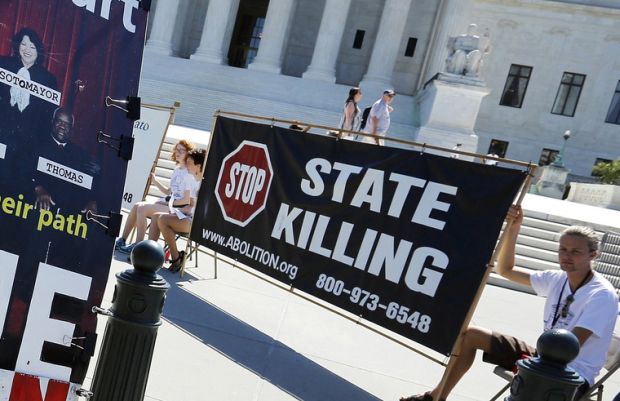 WASHINGTON (CNS) — On the same day the death of exonerated death-row inmate Glenn Ford in Louisiana made national headlines, a fast and vigil opposing the death penalty began in Washington.

On June 29 in front of the steps of the Supreme Court building, protesters gathered to begin the four-day protest for the 22nd year in a row.

An assortment of people gathered for this year’s protest, each with his or her own reason for being there. Some were there on principle, but for others the death penalty hit close to home.

For Bill Pelke, one of the co-founders of the Abolitionist Action Committee’s Annual Fast and Vigil, it’s about the night of May 14, 1985, when his grandmother Ruth Pelke was murdered.

Ruth Pelke was a 78-year-old Bible teacher in Indiana. When four teenage girls came to her door asking for Bible lessons, she gladly welcomed them in, only to be killed and her home robbed of 10 bucks and her car stolen.

The girls were quickly caught and put on trial. The ringleader, Paula Cooper, then 15, was sentenced to die; she was the youngest person to be put on death row in the U.S. at the time. Bill Pelke at that point was fine with the sentence she was given. However, three months after the trial, he had what he called a “spiritual transformation.”

He told Catholic News Service he became convinced that his grandmother would have had compassion for Cooper and would have been appalled so much hate was directed at her.

Bill said he thought about what Christ taught, in particular his response to Peter when the apostle asked, “Lord, how many times shall I forgive my brother when he sins against me? Up to seven times?” and Jesus responded: “I tell you, not seven times, but seventy times seven.”

After thinking about these teachings, which had been dear to his grandmother, he was positive that forgiving Cooper was the right thing to do.

Cooper’s case garnered a lot of attention from around the world. St. John Paul II even weighed in on the case, asking for clemency. Eventually the courts declared anyone under 16 couldn’t be given the death penalty, and her sentence was changed to 60 years in prison. In 2013 Copper was released after 27 years served. However this past May, only days after the 30th anniversary of Ruth Pelke’s murder, Paula Cooper was found dead, an apparent suicide.

His brother Ronnie Lee Gardner was executed in 2010 by firing squad in Utah. Following Ronnie’s execution his daughter — Randy’s niece — tried to commit suicide. That was when Randy sought out others to talk to about the effects the death penalty has on families of those who are executed.

Randy told CNS he doesn’t condone what his brother did, but he also doesn’t believe it was right to kill him.

“Nobody has a right to kill nobody,” he said, adding that “we’re all victims of state-sanctioned killing.” Since his brother’s execution, Randy has joined with the protests against the death penalty.

Protester SueZann Bosler had an even more personal story to tell. On Dec. 22, 1986, SueZann, then 24, and her father, the Rev. Bill Bosler, spent the day Christmas shopping. Later at the parsonage in Florida, a man came to the door, which didn’t surprise them. That happened often enough.

When Rev. Bosler opened the door, the man, James Bernard Campbell, attacked him. SueZann said she heard her father let out a noise, so she entered the room and saw him being stabbed. She tried to help, and she ended up being stabbed multiple times, in her side and her head. After collapsing to the floor, she held her breath, pretending to be dead, and Campbell moved on to find something to steal.

More concerned about her dad then herself, she struggled over to a phone and called for help. Her father didn’t survive.

She told CNS she felt confident she’d go to heaven if she had died that night, but wanted to save her father because she believed people would need him to do more good on earth.

She recalled a conversation she and her father had had years earlier debating the death penalty. Her father had told her that even if someone were to kill him, he still would not want that person to be sentenced to death.

SueZann spent years pushing to have Campbell’s sentence commuted from death to a life sentence. She succeeded in 1996; he is serving three consecutive life terms.

NEXT: Foundation to award grants to Catholic schools, churches, charities