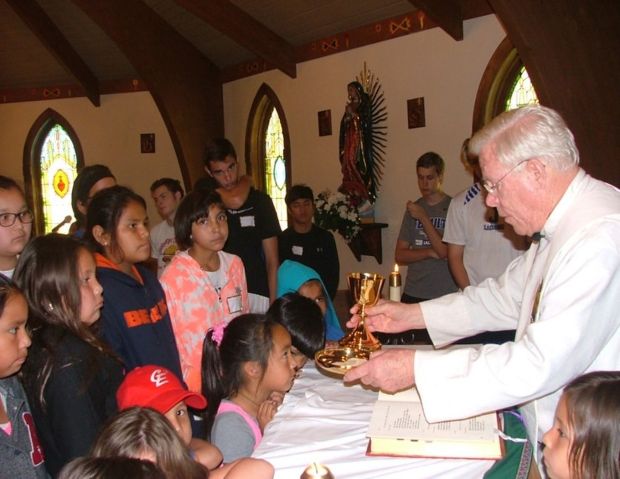 WASHINGTON (CNS) — Every summer hundreds of kids on the Rosebud Indian Reservation in south-central South Dakota participate in a day camp where they learn about God and their Lakota culture.

This camp is run through St. Francis Mission, which is an outreach ministry headed by the Society of Jesus for the 20,000 Sioux people on the Rosebud reservation.

The mission was founded in 1886 by Bishop Martin Marty with the intent of re-evangelizing Catholic Lakota people, immersing them in the Lakota tradition and bringing the Gospel to those who have not heard it.

The Lakota tribe is slightly smaller than other American Indian tribes. Currently, there are only 70,000 registered Lakota Indians, and only half of them are fluent in their ancestral Lakota language.

The Lakota people are strong cultural and spiritual people, and they make efforts to preserve their way of life. All adolescent members of the tribe receive instruction on the values and history of the group from their parents.

Body, Mind & Soul Camps, headed by Jennifer Black Bear, who is the director of religious education at St. Francis Mission, are another way of immersing youth ages 6-14 into the culture of their ancestors.

This year the camps were held in five different locations from June 1 to July 3, with the theme “Everest: Conquering Challenges with God’s Mighty Power.”

“Over the years, we’ve found that there are a lot of children attending Body, Mind & Soul Camps on the Rosebud Reservation that have heard very little about their own culture. Our new program is a way for us to educate them about the Lakota culture through stories, personal experiences and crafts,” said Black Bear.

Every morning at 9 the campers eat breakfast together, and then kick off the day’s activities with songs and a daily Bible verse. All activities, such as their snack, stories and crafts, center on the day’s verse.

The kids move through each activity station in groups, and some of the stations are KidVid Cinema, where the Lakota youth are able to watch videos of real kids who show how God is working in their lives, and Critter Cafe, where the kids prepare their own themed snack and talk about the day’s Bible verse.

“We hope to foster a love of learning in our campers,” Black Bear explained.

Essentially the Lakota story is about Iyan, a rock in the void, which was lonely and wished to have other objects in existence with it so that it would not be lonely and could have power over something other than itself. Iyan brought others into existence by piercing itself and blue blood flew from the wound and it formed Maka Ina, which is now Earth.

The power that moves all things is Taku Skan Skan, which is the energy given up by the rock, now powerless. Anpetu Wi is the sun of the day and Hanhepi Wi is the sun of the night. Humans, Pte’ Oyate’, were created and their purpose was to serve the gods, and they became the Lakotas.

Many of the volunteers for the Body, Mind & Soul Camps come from around the United States; they are not just Rosebud Reservation residents.

Black Bear noted that several of the campers have returned to volunteer as a way of giving back what they have received.

She told CNS she feels that the camps are part of the Catholic Church’s evangelization efforts.

NEXT: Death penalty protests bring together families of victims, the executed