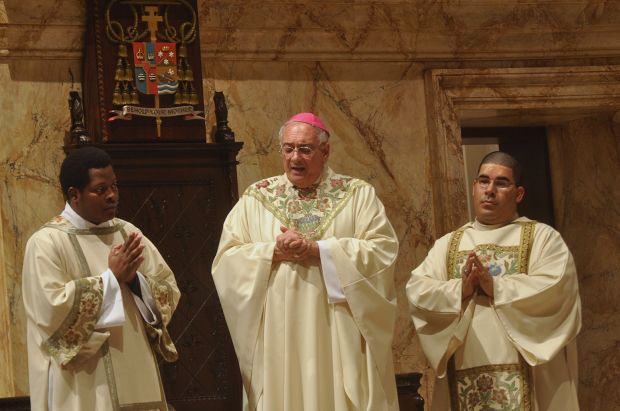 Bishop Nicholas DiMarzio of Brooklyn, N.Y., flanked by Dominican-born Deacon Jose Henriquez and Haitian-born Deacon Yvon Aurelien, celebrates a special Mass June 24 at St. James Cathedral-Basilica in Brooklyn to pray for a resolution to the Dominican Republic's threat to deport Haitians from that country. (CNS photo/Ed Wilkinson, The Tablet)

BROOLYN, N.Y. (CNS) — A Dominican Republic court decision rescinding the citizenship of Haitians born in that country “has caused a moral and civil outcry against this seemingly unjust law,” Brooklyn Bishop Nicholas DiMarzio said at a special Mass.

“We come tonight, not to enter into a political discussion, but to support the human dignity of our Haitian brothers and sisters who find themselves in this predicament of being deported to Haiti where the economic and social conditions are a tremendous burden,” he said at an evening Mass June 24.

The Mass was celebrated at St. James Cathedral-Basilica in downtown Brooklyn to pray for a resolution to the threat to deport Haitians from the Dominican Republic.

That country’s Supreme Court recently rescinded a 1929 law that gave citizenship to all Haitians born in the Dominican Republic. It declared that from now on Dominican citizenship will require being born of two native-born Dominican parents.

“We are two communities but in Brooklyn we come together as one,” Bishop DiMarzio told the congregation, which numbered about 700.

Among the concelebrants was retired Auxiliary Bishop Guy A. Sansaricq, the first native Haitian ordained a bishop in the United States. Also present were Auxiliary Bishops Octavio Cisneros and Raymond Chappetto and Bishop-designate James Massa, along with 26 priests of the diocese, many of them from Haiti.

Assisting Bishop DiMarzio at the altar were Deacon Jose Henriquez, who was born in the Dominican Republic, and Deacon Yvon Aurelien, a seminarian who was born in Haiti. (Deacon Henriquez was ordained a priest for the diocese June 27.)

“We come tonight, not to enter into a political discussion, but to support the human dignity of our Haitian brothers and sisters who find themselves in this predicament of being deported to Haiti where the economic and social conditions are a tremendous burden,” said Bishop DiMarzio. “In our Prayer of the Faithful tonight we will pray for peace and justice in the Dominican Republic and Haiti and in our own country.”

“And the reason we gather this evening, to truly show that we are with our brothers in Dominican Republic and we are suffering with them and we want to support them and give whatever support we can give.”

Marie Cattegrein told The Tablet, Brooklyn’s diocesan newspaper, that she came to the Mass “to pray for peace and love, for God (to) open their heart. God is love, let everybody love God.” Cattegrein is a member of Our Lady of Refuge Parish, in the Flatbush neighborhood of Brooklyn.

“It’s heart-wrenching,” said Michele Guerraer, of St. Therese of Lisieux Parish in East Flatbush. “You know, Jesus was the Lord of the poor, and the Haitians are the poorest people in the Dominican Republic and to see the poor treated in that way, it’s very unchristian-like.”

Bishop DiMarzio, who is recognized as an international voice on migration policy, said that it has been the Catholic Church’s position that “migrants be offered citizenship after fulfilling the requirements of the civil government in the land into which they have migrated.”

The bishop, who is a former director of the U.S. bishops’ Migration and Refugee Services and founder of the Catholic Legal Immigration Network, likened the situation in Hispaniola, the island that contains Haiti and the Dominican Republic, to the way undocumented people are treated in the United States.

“Undocumented workers come, seeking work, finding work that gives labor to a country that has accepted them and now wishes to expel them,” he said.

Bishop DiMarzio also prayed for the victims of a racially charged shooting in a South Carolina church during an evening Bible study meeting.

“Acts of prejudice cannot be tolerated anywhere in the world,” he said. “Tonight as we gather in this Eucharist we too call for a conversion of hearts wherever it is needed in the world today so that the human dignity of all persons can be respected and upheld.”