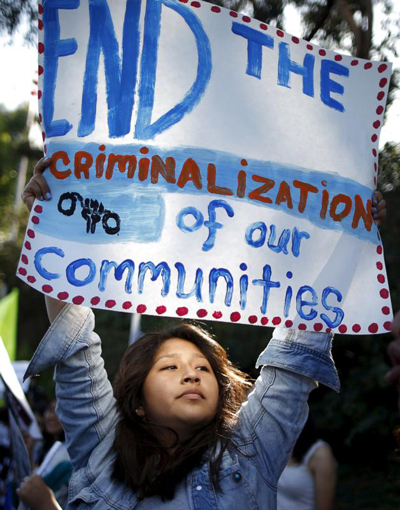 WASHINGTON (CNS) — A federal judge ruled July 24 that the government’s immigrant family detention system violates a settlement agreement dating to 1997 over how juveniles in the custody of the immigration agency are treated.

Advocates for the thousands of families being held in compounds run by for-profit prison companies hailed the ruling and said it should mean the end of the policy of Immigration and Customs Enforcement to lock up families while they pursue asylum and other types of protection from deportation.

Judge Dolly Gee of the Central California District Court found ICE violated a court settlement reached in 1997 with a strategy enacted last summer of detaining women and their children as a deterrent to others who might try to cross the U.S. border at Mexico. The Obama administration was given until Aug. 3 to officially respond to Gee’s ruling.

The detention centers have been harshly criticized by attorneys, members of Congress and advocates such as the U.S. Conference of Catholic Bishops. The USCCB and the Center for Migration Studies issued a scathing report in May based on bishops’ visits to two family detention centers in Texas. It decried conditions and recommended dismantling the whole system, replacing it with less drastic ways of keeping track of immigrants who are awaiting the outcome of legal cases.

More than 55,000 families were among a surge of Central American immigrants across the U.S.-Mexico border last summer. Along with 57,000 unaccompanied minors, the families were fleeing violence and other dangers in their home countries of El Salvador, Guatemala and Honduras.

ICE had in 2009 closed another family detention center amid strong criticism. But it opened new centers and expanded an existing one to hold women and their children. Current capacity is for more than 3,000 people, primarily at two detention centers in Texas, including one built specifically to house 2,500 women and children.

Gee had issued a preliminary ruling in May, telegraphing her intentions to find the detention system unacceptable. In response, ICE had begun releasing more families on bond and with ankle-bracelet monitoring systems, but hundreds of families are still in the centers.

Most of the families in the centers have met the first legal hurdle in applying for asylum. Of the tens of thousands of other families apprehended at the border, a majority have not been detained, but are released on bond pending adjudication of their attempts to be allowed to remain. But some families have been held in the centers for more than a year.

In her July 24 order, Gee said she found it “astonishing that the defendants have enacted a policy requiring such expensive infrastructure without more evidence to show that it would be compliant with an agreement that has been in effect for nearly 20 years or effective at achieving what defendants hoped it would accomplish.”

The 1997 settlement in Flores v. Reno set out standards for treatment of juveniles who were apprehended by the Border Patrol. The unaccompanied minors picked up in last year’s surge, for instance, were put into the care of the Office of Refugee Resettlement, a division of the Department of Health and Human Services, and placed into a system of foster homes and similar non-detention settings while efforts were made to unite them with family members.

Gee said the children who are picked up by the Border Patrol while traveling with their mothers should be treated with the same level of care as those who arrive on their own. She said ICE failed to provide any evidence to support the agency’s argument that it was necessary to detain families as a deterrent.

Gee ordered the administration to release children and parents unless there’s a determination that there is “a significant flight risk, or a threat to others or the national security … which cannot be mitigated by an appropriate bond or conditions of release.” She also ordered ICE to come up with standards for conditions under which immigrant children, including those with their parents, are held in even temporary conditions.

Auxiliary Bishop Eusebio L. Elizondo of Seattle, chairman of the USCCB Committee on Migration, welcomed Gee’s ruling and urged the administration to comply with it expeditiously.

“Appealing the decision would only prolong a flawed and unjust policy of treating this vulnerable population as criminals,” said a July 27 statement from Bishop Elizondo.

The temporary conditions addressed by Gee’s order included frigid, overcrowded holding cells, inappropriate food, inadequate medical care and other problems for how immigrants have been held by Customs and Border Patrol.

In a July 27 letter to ICE director Sarah Saldana, the Catholic Legal Immigration Network, known as CLINIC, and other immigrant legal services agencies called for ICE “to account for the cascade of due process violations and detrimental practices at the South Texas Family Residential Center in Dilley, Texas, and at the Karnes County Residential Center in Karnes City, Texas.”

A press release about the letter to Saldana said that over the past weeks, attorneys and volunteers “have witnessed ICE officials coercing women into accepting ankle monitors, denying access to legal counsel and impeding pro bono representation, along with mass disorganization and confusion in implementing the new release policy for mothers who fled violence and who are pursuing protection in the United States.”

It said the need to resolve those problems is “all the more crucial given last week’s court order in the Flores case, which should mean that the remaining families will be released.”

“Rather than double down on a costly policy that has been plagued with problems, including suicide attempts, inadequate medical and mental health care, prolonged periods of detention, and extremely limited access to counsel, (the Department of Homeland Security) must use the least restrictive alternatives to detention to mitigate concerns about flight risk,” said a statement from the center. Such alternative “will enable these mothers and children to reside with family members in the United States and retain legal counsel to help them tell their stories and seek protection in immigration court.”

Among the religious organizations commenting about the ruling, Sister Patricia McDermott, president of the Sisters of Mercy of the Americas, asked the Obama administration to end “the shameful policy of incarcerating refugee women and children. President (Barack) Obama’s decision to appeal the ruling or comply with Judge Gee’s findings will determine his legacy on immigration, as much as his fight for comprehensive immigration reform and deferred action.”

Scott Wright, director of the Columban Center for Advocacy and Outreach, said that “a policy that blames women and children for fleeing violence, puts them in detention, and then expedites their deportation directly contradicts our values as people of faith and a nation of immigrants.”

Sister Louise Gallahue, of the Daughters of Charity of the Province of St. Louise, commended Gee’s ruling, calling it “consistent with Catholic social justice teaching. She said the decision “enlivens the truth of Pope Francis’ remarks” at an audience for Italian prison chaplains: “No cell is so isolated as to exclude the Lord, none. He is there. … His paternal and maternal love reaches everywhere.”

NEXT: Catholic Appalachian group asks bishops to be strident on ‘Laudato Si”