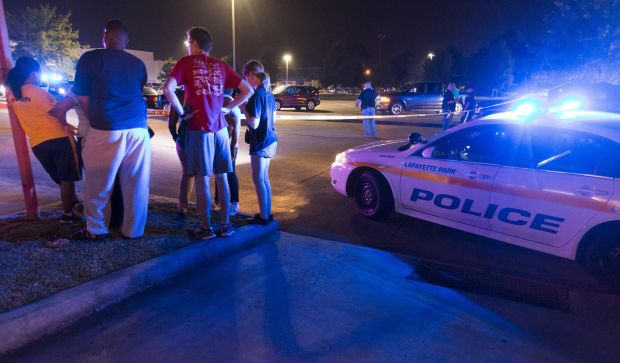 Bystanders watch over the scene at a movie theater in Lafayette, La., July 23. A gunman opened fire at the theater that evening, killing at least two people and injuring nine others before taking his own life, according to local reports. (CNS photo/Lee Celano, Reuters)

LAFAYETTE, La. (CNS) — Bishop Michael Jarrell of Lafayette offered prayers and sympathy to the victims of a multiplex cinema shooting July 23 in Lafayette in which two were killed and nine wounded.

“On behalf of the Catholic faithful in the Diocese of Lafayette, we offer our deepest sympathies to the families of the victims of the shooting at the Grand Theater in Lafayette,” Bishop Jarrell said in a July 23 statement. “We are all shocked and saddened by this tragedy. We pray that everyone affected by this horror may feel the comforting presence of our Lord Jesus surrounding them during this difficult time.”

The gunman, identified as John Russell Houser, 59, opened fire about 20 minutes into a screening of the movie “Trainwreck.” Of the 13 shots he fired, 11 hit audience members who were watching the film.

There were about 300 people inside the 16-screen cinema at the time of the shooting, about 7:30 p.m. Central time. Police said Houser had intended to blend in with the fleeing patrons, but when he saw police outside the theater, he went back inside and fatally shot himself.

No motive was offered for the shooting, and police acknowledged during a July 24 news conference they may not find a motive. Police added Houser had mental health issues, and that his wife had sought a restraining order against him in 2008. They said he had another magazine of ammunition with his at the theater to continue his shooting spree.

Father Michael Russo, pastor of Our Lady of Fatima Parish in Lafayette, was making his church available for people to leave flowers, notes and other remembrances in the wake of the shooting.

“Lafayette is a place of great faith. We ask all the Catholic faithful and, indeed, all people of goodwill throughout Acadiana to stop, and offer sincere and thoughtful prayer for those who have died, the wounded, their families as well as the perpetrator of this evil act,” Bishop Jarrell said.

“We pray in thanksgiving for the tireless efforts of law enforcement, paramedics and first responders. Our priests and deacons stand ready to pray with any of the wounded and family members impacted by this senseless tragedy. Along with all people of faith, we commit ourselves to promoting a society that respects the dignity of every human life.”

NEXT: Tide may be turning against harsh prison sentences