Tide may be turning against harsh prison sentences 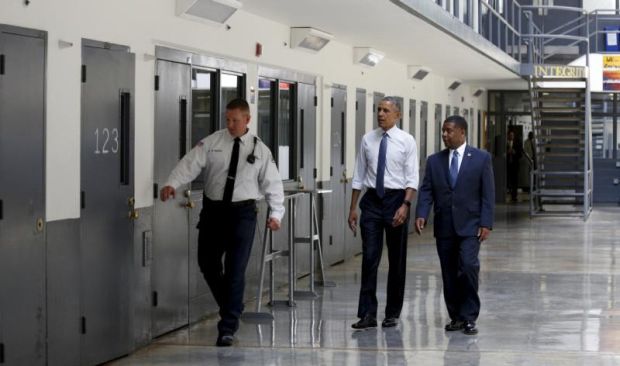 WASHINGTON (CNS) — Readers of the Bible may recall the passage in Chapter 4 of Luke that presages the start of Jesus’ public ministry, in which Jesus said, in part: “The Spirit of the Lord is upon me, because he has anointed me to bring glad tidings to the poor. He has sent me to proclaim liberty to captives.”

Others may be more familiar with the passage in Chapter 25 of Matthew, two days before the Last Supper, in which Jesus uttered one of his last parables, in which a king tells the righteous, “For I was hungry and you gave me food, I was thirsty and you gave me drink, a stranger and you welcomed me, naked and you clothed me, ill and you cared for me, in prison and you visited me” — and when righteous ask when that happened since they can’t recall that, the king replies, “Whatever you did for one of these least brothers of mine, you did for me.”

On July 16, President Barack Obama made his own visit to “the least” of these in prison — at the El Reno Federal Correctional Institution Oklahoma City. It was historic, being the first prison visit by a sitting president. Three days earlier he commuted the sentences of 46 federal prisoners.

Polling may show that Americans are roughly split on Obama’s overall job performance as president, but his visit to El Reno and the commutations show evidence of an emerging consensus that sentences are too harsh and that many prisoners are locked up for far longer than necessary.

Obama’s commutations, two more than he’s given over the rest of his presidency, take effect Nov. 10. The inmates being released are all nonviolent drug offenders who were given lengthy prison terms when Congress, in a cyclical tough-on-crime mood, changed sentencing guidelines into mandatory-minimum jail terms. That mood may be changing on Capitol Hill.

The sentences — which judges had no discretion to shorten — filled the nation’s penitentiaries to overflowing. Prison construction became the quick fix of economic stimulus for small towns battered by economic setbacks or stagnant crop prices. Private companies also got into the act, often housing convicts hundreds of miles away from their homes so families couldn’t see them. The prisons even charged exorbitant prices for collect calls from faraway family members.

Clifton, speaking to Catholic News Service from Chicago, where she was attending a conference on restorative justice, said she is assembling material for a workshop on implementing restorative justice at the parish level in time for next year’s Catholic Social Ministry Gathering.

Restorative justice emphasizes the repairing of harm caused by unjust behavior. Unlike the lock-them-up-and-throw-away-the-key model of retributive justice, restorative justice holds offenders accountable, while simultaneously trying to redeem their broken situation. It is an acknowledgment that true justice is difficult work, but that the value and dignity of all persons involved is worth the effort.

Mike Riggs, director of communications for Families Against Mandatory Minimums, was excited about Obama’s actions.

“We have a lot of people in prison, not only more than before, but more than any other country in the world,” he told Catholic News Service. “They may have broken the law, but they’re still human beings. They’re seeking redemption, changing their lives, hoping to get back to their families.”

Riggs said he would like to see more traction on the federal Justice Department’s clemency initiative announced last year. Under its terms, clemency can be invoked for federal prisoners if they likely would have received a substantially lower sentence if convicted of the same offense today; are nonviolent, low-level offenders without significant ties to crime rings; have served at least 10 years of their sentence; don’t have a significant criminal history; have demonstrated good conduct in prison; and have no history of violence prior to or during their current imprisonment.

“Speaking as someone who’s not privy to the decision-making process,” Riggs said, “we do understand why they have to be careful. We’d love to see them devote more resources toward the intensive vetting that is required to grant them clemency.”

But life can be tough once a prisoner is released. “Some folks went in with not enough education to be competitive,” Riggs told CNS. “A lot of them have gotten things like GEDs, they’ve received training for a trade, substance abuse counseling, anger management counseling. A lot of that is really helpful, but the technology has changed (since they went into prison) to make them really competitive in the workplace.”

He added that “they can apply for a job but they may not get past the ‘slush file,'” slang for the wastebasket in which a lot of job applications are tossed once someone sees a checkmark next to the question, “Have you ever been convicted of a felony?” To date, 17 states and 52 cities have passed “ban the box” laws forbidding employers from asking the question.

Mandatory minimums are one end of the prison spectrum. At the other end is the mandatory maximum: the death penalty.

“Our faith tradition offers a unique perspective on crime and punishment, one grounded in mercy and healing, not punishment for its own sake,” they said. “No matter how heinous the crime, if society can protect itself without ending a human life, it should do so. Today, we have this capability.” They added, “As a people of life, we say it is time for the U.S. to abandon use of the death penalty.”

No one could agree more than Marc Hyden, founder of Conservatives Concerned About the Death Penalty, albeit for different reasons than might be argued by the bishops.

“The conservative case against the death penalty is incredibly simple,” Hyden said. “The death penalty risks innocent lives, it costs more than prison. I don’t think there’s anything pro-life about giving the state the power to kill its citizens. What do you get out of this program? You get the quintessential big, broken government program.”

Hyden cautions against questioning his conservative bona fides, as he used to work for the National Rifle Association. He said he’s welcomed at the Conservative Political Action Conference, Tea Party and Republican Party events. “I’m mobbed by conservatives who thought they were the only conservatives who were against the death penalty,” he said.

But for each step forward, there is a step back. The Supreme Court ruled this summer to uphold a drug protocol used in executions that was challenged as cruel and unusual punishment. And a petition effort is underway in Nebraska to repeal the death penalty ban enacted earlier this year, after the Legislature overrode a gubernatorial veto.

“We as Catholics have to meet people where they are on their journey. People are at different places, and it takes a lot to be able to forgive,” Clifton said of the Nebraska effort.

With Pope Francis scheduled to visit a prison during the Philadelphia leg of his U.S. visit, she added, “we’re hopeful for statements against the use of the death penalty on our soil.”