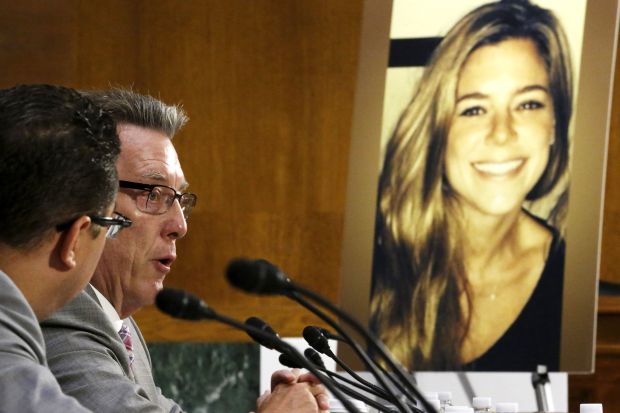 Jim Steinle, father of murder victim Kathryn Steinle, pictured at right, testifies about his daughter's death during a July 21 a Senate Judiciary Committee hearing on U.S. immigration enforcement policies on Capitol Hill in Washington. Kathryn was allegedly killed by an immigrant who is in the country illegally and has a felony record. (CNS photo/Jonathan Ernst, Reuters)

WASHINGTON (CNS) — San Francisco’s archbishop said the recent “senseless killing” of a young woman in that city allegedly by a man in the U.S. illegally is “a horrible tragedy” but should not be used to push for policies that “punish all immigrants.”

“While it is important that we learn from this incident and work to prevent it from happening again, it is also important that we recognize that the vast majority of immigrants — both those with and without papers — are not a violent threat to society and so should not be subject to guilt by association,” he said.

“In fact, statistics show that immigrant communities are by and large safe and that a cooperative relationship between law enforcement and those communities enhances public safety and reduces crime,” he said.

Archbishop Cordileone made the comments in a written statement to the Senate Judiciary Committee, which held a hearing on immigration enforcement policies prompted by the shooting death of 32-year-old Kathryn Steinle, who was felled by a bullet July 1 as she and her father walked along Pier 14 in San Francisco.

Juan Francisco Lopez-Sanchez, 45, who has multiple felony convictions and had been deported from the United States five times back to his native Mexico, was arrested and charged in her death. He entered a plea of not guilty. He has admitted to shooting a gun he found at the pier but said he fired at random and did not know any of the bullets had hit someone.

Archbishop Cordileone in his statement pointed to long-standing problems with the nation’s immigration policies and reiterated what the U.S. Catholic bishops have said for years, that comprehensive reform is “long overdue.”

He urged Congress and the Obama administration “to work together to comprehensively repair our nation’s flawed immigration system, a system that divides families and undermines human dignity. Such reform … should preserve family unity, ensure the due process of law, protect those fleeing persecution and ensure the integrity of our nation’s borders.”

At the packed hearing, which included testimony from Steinle’s father, Jim, some Republican senators called for cutting off federal funds to U.S. cities that have sanctuary policies aimed at protecting residents regardless of immigration status.

Critics of such policies claim that because San Francisco is a “sanctuary city,” local law enforcement was prevented from alerting U.S. Immigration and Customs Enforcement when Lopez-Sanchez was released from jail in April. He was being held on a drug-related warrant but was freed when no charges were filed.

Lopez-Sanchez had served several years in federal prison for felony re-entry after deportation when he was released in March into the custody of ICE.

According to CNN, ICE then turned him over to San Francisco authorities because of the drug-related warrant. The federal agency asked that it be informed if Lopez-Sanchez were released, but no notice was given to ICE.

Addressing critics of the city’s sanctuary policy, Mayor Edwin Lee said in a recent statement: “Let me be clear: San Francisco’s Sanctuary City Policy protects residents regardless of immigration status and is not intended to protect repeat, serious and violent felons.”

In his statement, Archbishop Cordileone said he applauded “the commitment to public safety of the city of San Francisco and other local jurisdictions and support their right to exercise reasonable and appropriate discretion in the handling of immigrant detainees, consistent with their need to maintain public safety.”

“At the same time, greater cooperation is needed between local and federal authorities in identifying those who represent a violent threat to our communities,” he said. “A just and humanitarian policy should not be abandoned because of flaws in the system. Rather, proper authorities should make prudent adjustments in the application of the law in order to protect the public safety of all those living in our country.”

He said local, state and federal elected officials must “work together in a bipartisan manner to ensure that all persons — U.S citizens and newcomers alike — are protected from individuals who pose a threat to national security or public safety.”

“However, they should avoid the implementation of policies that punish all immigrants for the transgressions of a small minority,” he added.

Archbishop Cordileone also urged elected officials and others to “refrain from using this tragedy for political expediency or political gain. This is a disservice to Kathryn’s memory and to any effort to find a just solution that prevents a reccurrence of this type of event.”

NEXT: Nuns ask court for protection from complying with HHS mandate, fines