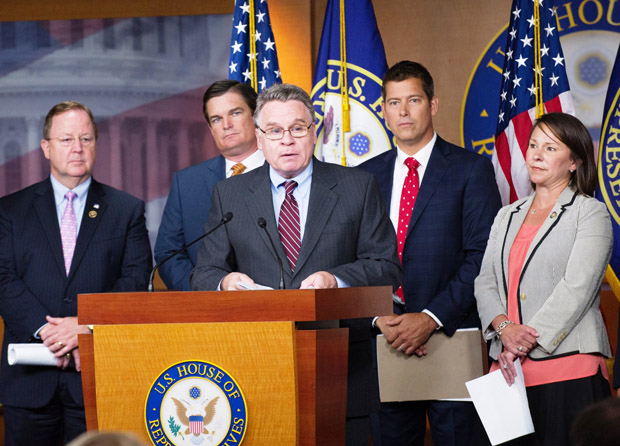 SAN FRANCISCO (CNS) — A video released July 14 appears to show a top Planned Parenthood official discussing the sale of parts of aborted babies for research, including discussing ways the abortion procedure can be altered to preserve specifically requested body parts.

The nearly nine-minute edited video — filmed undercover and produced by the Center for Medical Progress — quickly went viral and Planned Parenthood denied making a profit on the sale of aborted baby parts.

“Planned Parenthood’s criminal conspiracy to make money off of aborted baby parts reaches to the very highest levels of their organization,” said David Daleiden, who led the undercover investigation.

Louisiana Gov. Bobby Jindal launched an investigation in his state, where the abortion provider is getting ready to open a $4 million clinic in New Orleans.

“Today’s video of a Planned Parenthood official discussing the systematic harvesting and trafficking of human body parts is shocking and gruesome,” said Jindal, who is a Republican presidential candidate.

In the video released July 14, a woman identified as Dr. Deborah Nucatola, senior director of Planned Parenthood Federation of America’s Medical Services Department, says: “We’ve been very good at getting heart, lung, liver, because we know that, so I’m not gonna crush that part, I’m gonna basically crush below, I’m gonna crush above, and I’m gonna see if I can get it all intact.”

The video was shot at a business lunch in the Los Angeles area July 25, 2014, with actors posing as buyers from a human biologics company, according to the nonprofit Center for Medical Progress.

The center describes itself as a group of citizen journalists dedicated to monitoring and reporting on medical ethics and advances and in particular “contemporary bioethical issues that impact human dignity.”

In the video, Nucatola says specific body parts go for $30 to $100 and fetal livers are in high demand.

As head of Planned Parenthood’s Medical Services Department, Nucatola has overseen medical practice at of the federation’s locations since 2009. She also trains new Planned Parenthood abortion doctors and performs abortions herself at Planned Parenthood in Los Angeles on women who are up to 24 weeks pregnant, according to Center for Medical Progress.

Planned Parenthood acknowledged it sometimes charges for aborted fetuses’ body parts used for research. However, Erin Ferrero, Planned Parenthood’s vice president of communications, said in a statement: “There is no financial benefit for tissue donation for either the patient or Planned Parenthood.”

Ferrero questioned the credibility of the video, calling it “heavily edited,” and said the money mentioned is for actual costs such as transportation costs.

The video of Nucatola is part of the “Human Capital” project, a 30-month undercover investigation by the center and also supported by Life Legal Defense Foundation, a Napa, California-based nonprofit group that advocates for pro-life issues through the law and education.

Full footage of the Planned Parenthood official’s conversation and a 60-page transcript were available on the centerformedicalprogress.org website. The website also holds documents related to harvesting of aborted baby parts.

“This public revelation about Planned Parenthood’s trafficking in human body parts obtained as a byproduct of abortion is long overdue,” said Vicki Evans, respect life coordinator for the Archdiocese of San Francisco.

Her 2010 report on the fetal tissue industry, titled “Commercial Markets Created by Abortion: Profiting from the Fetal Distribution Chain” was published in the National Catholic Bioethics Center newsletter “Ethics &Medics.”

An undercover investigation of a Planned Parenthood affiliate conducted by Life Dynamics Inc. in 2000 resulted in similar findings, Evans said. Congressional hearings to investigate trafficking in fetal organs and tissue by private companies were held but nothing was done, Evans said.

“I hope this time, there is enough public outrage to finally stop the abortion giant from continuing to exploit women and their unborn children to increase its obscene profits,” Evans told Catholic San Francisco, the archdiocesan newspaper.

In Washington, U.S. Rep. Chris Smith, R-New Jersey, and two other House members were holding an afternoon news conference July 15 calling for a hearing and further investigation into the evidence presented in the Nucatola video.

Americans United for Life in a July 14 statement called for immediate congressional and state investigations into “abortion profiteering.”

Under the National Organ Transplant Act of 1984, the revised Uniform Anatomical Gift Act of 1987 and the National Institutes of Health Revitalization Act of 1993, human fetal tissue or organs cannot legally be bought and sold in the U.S., said Evans. Money can change hands only to reimburse for expenses incurred.

In the July 14 undercover video, Nucatola says that the abortion procedure can be altered if the abortionist knows in advance what body part is desired by the buyer, saying extraction of the baby can be changed to breech to get more of the body intact for use by researchers.

The July 14 report renewed calls for an end to the more than $500 million in state and federal funds that Planned Parenthood receives annually.

“Why should the government fund an organization that is so corrupt as to be selling the brains, livers, eyes, legs and other body parts of the babies it kills — not to mention being corrupt enough to kill them in the first place,” said Father Frank Pavone, Priests for Life national director.

“The tragedy exposed here is another sign that the safe, legal, and rare approach to abortion was never a tenable position,” wrote Dominican Brother Dominic Bouck in a blog post on the website of the journals First Things.

NEXT: Kids volunteer at nuns’ cloister, learn about life behind the grille