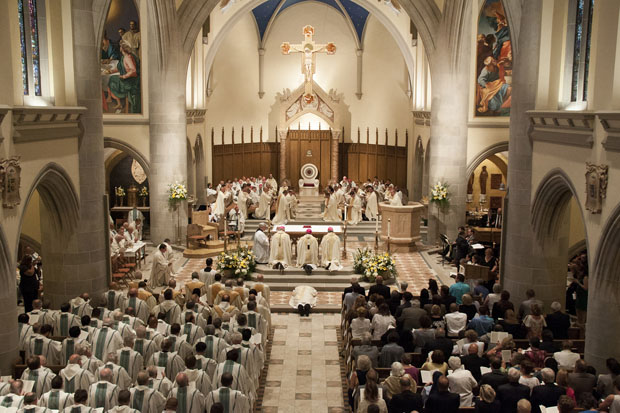 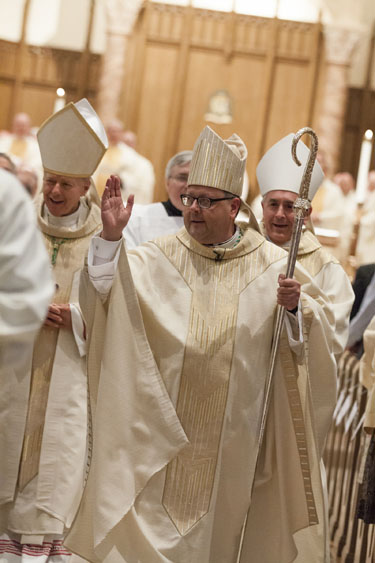 GREENSBURG, Pa. (CNS) — Drawing on his episcopal motto, the new bishop of Greensburg told the congregation: “May we always serve the Lord with gladness.”

Bishop Edward C. Malesic made the remarks after he was ordained and installed as Greensburg’s fifth bishop July 13 at Blessed Sacrament Cathedral in Greensburg, southwestern Pennsylvania.

Bishop Malesic thanked the many people who were part of his ordination celebration, starting with God “who created me, who redeemed me in Christ and who called me to be a disciple and now a bishop of his church.”

“Jesus Christ is the same, yesterday, today and forever,” he said. “Let us go forth knowing that we follow him and keep our eyes firmly fixed on the prize of our faith — our salvation.”

Archbishop Charles J. Chaput was the principal ordaining bishop. The co-ordaining bishops were retired Bishop Lawrence E. Brandt of Greensburg, and Bishop Ronald W. Gainer of Harrisburg, where Bishop Malesic was serving as judicial vicar and pastor of Holy Infant Parish in York Haven, when Pope Francis appointed him to Greensburg April 24.

In the rite of ordination, Bishop Malesic was presented to Archbishop Chaput, then Archbishop Carlo Maria Vigano, apostolic nuncio to the U.S., who read the apostolic mandate on the appointment in which Pope Francis instructed the new bishop to “love all whom God has placed in your pastoral care, especially the poor, the infirm and homeless.”

Archbishop Chaput delivered the homily, noting that “the rank in the church to which our brother is about to be raised … is one serving others, not being a master.”

“The title of bishop is one of service, not of honor. Keep watch over the whole flock,” he said.

Commenting on “whole flock,” the archbishop interjected that when he drives by Protestant churches in Philadelphia, he prays for them because “I am their archbishop, too, whether they know it or not.”

The rite continued with Bishop Malesic resolving to uphold the faith and discharge his duties as bishop, followed by the laying on of hands and the prayer of ordination.

The more than 20 bishops who attended the ordination and installation Mass also participated in the laying on of hands with the principal ordainers, keeping with the tradition of apostolic succession held to be an unbroken line of blessing stretching back to St. Peter.

Bishop Malesic was presented with the Book of the Gospels; a ring to symbolize his fidelity to the bride of God, the Catholic Church; the investiture of the miter to signify his resolve to pursue holiness; and the presentation of the crosier, signifying his duty of guiding and governing the church entrusted to him.

After receiving the crosier, Bishop Malesic was seated in the cathedra, the bishop’s chair.

At a prayer service the night before his ordination, Bishop Malesic said he accepted “this massive change in my life” and expressed hope “that my ordination will be an opportunity to stretch and strengthen your faith, as well as mine.”

He also asked that the “Holy Spirit will give me the qualities needed to be a good shepherd in today’s church and in today’s world.”

Bishop Brandt welcomed attendees to the ordination, recognizing his brother bishops and archbishops as well as members of the clergy and consecrated life from the Harrisburg and Greensburg dioceses.

He extended a special welcome to Bishop Malesic’s family members, including his 97-year-old father, Joseph, and his brother, Robert.

Bishop Brandt acknowledged Archbishop Vigano as the “representative of the Holy See to the bishops of the United States.” He described an inscription found in the lower level of St. Peter’s Basilica, “Where Peter is, there is the church,” emphasizing that the appointment of Bishop Malesic “continues the apostolic succession of bishops as successors to the apostles.”

Bishop Brandt congratulated his successor, telling Bishop Malesic, “It is with great anticipation we now celebrate your episcopal ordination and installation as our fifth bishop.”

Nearly 900 people attended the Mass, including more than 20 bishops, 140 priests and 15 deacons. Guests included parishioners from Holy Infant Parish in York, as well as representatives from Catholic schools and parishes in the Diocese of Greensburg. Representatives from the communities of men and women religious in the diocese also attended.

A Harrisburg-area native, Bishop Malesic was born Aug. 14, 1960. He attended Lebanon Valley College in Annville, Pa., for three years before entering the seminary at Pontifical College Josephinum in Columbus, Ohio, where he earned a master of divinity degree in 1987.

He was ordained to the priesthood May 30, 1987, in Harrisburg by then-Bishop William H. Keeler and served in various pastoral assignments in parishes and was a campus minister at York College of Pennsylvania, Millersville University, Franklin and Marshall College and Messiah College.

He obtained his licentiate in canon law in 1998 from The Catholic University of America and served in the Diocese of Harrisburg’s tribunal in various capacities, being appointed judicial vicar in 2006. He was appointed administrator of Holy Infant Parish April 1, 2004, and appointed pastor there Dec. 22, 2004.

Hill is a contributing writer at The Catholic Accent, newspaper of the Diocese of Greensburg.

NEXT: Video of Planned Parenthood doctor prompts calls for investigation