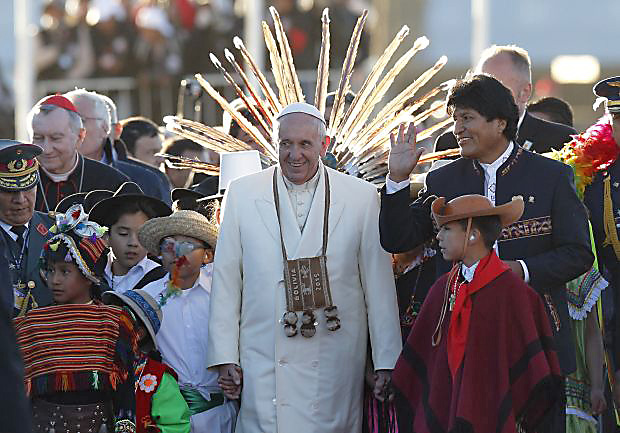 Pope Francis walks with Bolivian President Evo Morales and a children in traditional dress as he arrives at El Alto International Airport in La Paz, Bolivia, July 8. The airport is at 13,325 feet above sea level. (CNS photo/Paul Haring)

LA PAZ, Bolivia (CNS) — Praising Bolivia’s efforts to include all its citizens in the country’s economic, political and social life, Pope Francis also defended the record and the right of the Catholic Church to be an active member of society and the right of the bishops to comment on public issues.

The pope arrived an hour late July 8 in La Paz, a city almost 12,000 feet above sea level, where he was scheduled to spend only four hours because of the risks of altitude sickness.

Bolivia was the second leg of Pope Francis’ July 5-12 visit to Latin America. He arrived after a three-hour flight from Quito, Ecuador. In preparation for the elevation, he drank a blended herbal tea of coca leaves, chamomile flowers and anise seeds, according to one of the flight attendants.

Bolivian President Evo Morales, often a harsh critic of his country’s bishops, was at the airport to welcome Pope Francis.

“Whoever betrays a poor person, betrays Pope Francis,” Morales said in comments shortened to spare the pope spending too much time at the high altitude. “Brother pope: In many historic moments the church was used for domination, subjugation and oppression. Now, the Bolivian people receive you with hope and joy and welcome you as the maximum representative of the Catholic Church, who came to Bolivia to help with the liberation of our peoples.”

Church-state relations in Bolivia have been rocky, with church leaders being cast as the chief critics of Morales, who became the country’s first indigenous president in 2006. Church leaders say his Movement Toward Socialism party has been trying to marginalize Catholicism, but party members say the church is complaining because it is losing its previously privileged position in society.

The Catholic faith set its roots deep in Bolivia and in the country’s people, the pope said. The development of the nation and the shaping of its culture owe much to the church.

Pope Francis made clear to Morales in his airport speech that “the voice of the bishops, which must be prophetic, speaks to society in the name of the church, our mother, from her preferential, evangelical option for the poor.”

The aim of Catholic education, health and social welfare programs is to “work for the integral development of the person, as well as for the care and protection of those who are most vulnerable,” the pope said. “We cannot believe in God the Father without seeing a brother or sister in every person, and we cannot follow Jesus without giving our lives for those for whom he died on the cross.”

Highlighting the “important steps” the nation is making to promote greater inclusion and equality for all its citizens, Pope Francis noted that the constitution “recognizes the rights of individuals, minorities and the natural environment, and provides for institutions to promote them.”

The words on paper, though, cannot become a reality without “civic cooperation and dialogue,” he said.

Pope Francis also insisted that true advancement would be impossible without an appreciation of and respect for moral values and common ideals.

The family is particularly important, he said. “In an age when basic values are often neglected or distorted, the family merits special attention on the part of those responsible for the common good, since it is the basic cell of society.

On the way from the airport to the government palace, Pope Francis stopped to bless a site memorializing the assassination of Jesuit Father Luis Espinal. The Spanish-born Jesuit, who was active in the country’s pro-democracy movement, was kidnapped, tortured, killed and dumped in a landfill in1980. 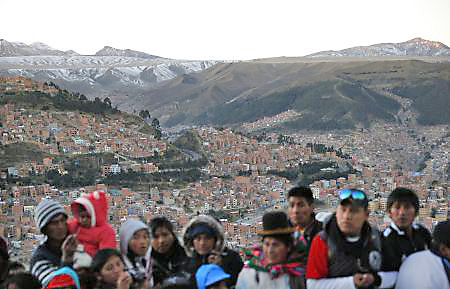 Briefly addressing hundreds of people who gathered at the site, Pope Francis referred to Father Espinal as “our brother” and described his ministry as “preaching the Gospel and freedom.”

“Espinal preached the Gospel and that Gospel irritated. And so they eliminated him,” the pope said.

After a long private meeting with Morales, the president gave the pope a crucifix atop a hammer and sickle, a replica of the one fashioned from wood scraps by Father Espinal and kept by his bedside.

Jesuit Father Xavier Albo, 80, who worked with Father Espinal and shared a room with him, told Catholic News Service that Father Espinal “gave a lot of importance to the dialogue between Marxists and Christians,” and “between workers — the hammer — and campesinos — the sickle.”

Before leaving La Paz, Pope Francis met in the cathedral with a wide variety of civil leaders, insisting that church and state, businesses and artists, indigenous peoples and newcomers must work together to promote the common good.

“It is so easy for us to become accustomed to the atmosphere of inequality all around us, with the result that we take it for granted,” he said. “Without even being conscious of it, we confuse the ‘common good’ with ‘prosperity,’ especially when we are the ones who enjoy that prosperity. Prosperity understood only in terms of material wealth has a tendency to become selfish, to defend private interests, to be unconcerned about others, and to give free rein to consumerism.”

The common good, he said, is moving from thinking about “what is best for me” to “what is best for everyone.” It embraces everything that brings people together, “common purpose, shared values, ideas which help us to look beyond our limited individual horizons.”

Pope Francis also emphasized the contributions and the rights of Catholicism and other religions in a free, democratic society. “Faith,” he said, “is a light which does not blind or confuse, but one which illuminates and respectfully guides the consciences and history of every person and society.”

Contributing to this story was David Agren in Santa Cruz, Bolivia.

PREVIOUS: Greek archbishop hopeful for new deal to save his country’s economy

NEXT: Papal visit to home spotlights plight of seniors in many countries