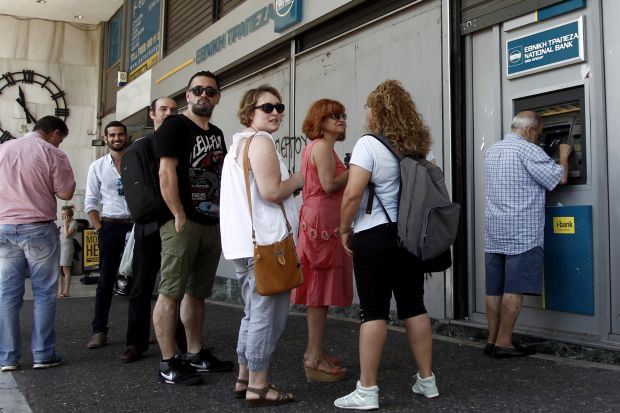 People queue to withdraw money from an ATM outside a branch of Greece's National Bank in Athens, Greece, July 6. (CNS photo/Alexandros Vlachos, EPA)

ATHENS, Greece (CNS) — A Greek archbishop said he was hopeful for a last-minute deal to save his country from bankruptcy.

“At this critical moment, we’re all hoping some new agreement might still be reached,” said Archbishop Sevastianos Rossolatos of Athens.

“It’s clear there must be further reforms here, but also changes in how the European Union manages its affairs. But for now, people just hope to survive these truly terrible conditions.”

Archbishop Rossolatos said Catholic clergy had intensively debated the July 5 referendum — in which citizens rejected demands by international creditors — but did not adopt a collective position and had no clear data to date on how laypeople had voted.

However, he added that Greece’s worsening economic crisis was severely hampering pastoral work by his church, which was unable to maintain its buildings or provide priestly services for migrants and refugees now arriving in large numbers.

“People are now very poor, and our parishes and dioceses simply have no money,” Archbishop Rossolatos said.

“We realized the government would maintain the same position, whatever the referendum outcome, so we left people to decide for themselves,” he added.

The Catholic Church makes up just 3 percent of Greece’s population of 11 million, compared to 97 percent belonging to the Orthodox Church, which is declared the ”prevailing religion” in the national constitution.

Catholic leaders, who were forced to close charitable projects after a tax increase of more than 40 percent in 2013, have been outspoken during the current crisis, blaming corruption among the country’s politicians and harsh, unrealistic attitudes among Greece’s international creditors.

In a June 29 open letter to Tspiras and other party leaders, the secretary-general of the six-member Catholic bishops’ conference, Archbishop Nikolaos Printezis of Naxos, said both sides were to blame for the crisis and urged Greek politicians to seek “national, not party solutions” and “serve rather than mislead the people.”

The bishops’ conference president, retired Bishop Fragkiskos Papamanolis of Syros, criticized the government handling of the referendum as “incompetent.”

Archbishop Rossolatos welcomed the “help for suffering people” provided by Caritas Italy, but said current hardships were being felt equally throughout the Greek church, as government taxes and duties consumed half of all church resources and had a “devastating and debilitating impact.”

He added that retirees were lining up at bank cashpoints in the early hours of the morning, hoping to withdraw money before it ran out, while others appeared “disorientated and confused.”

“We simply haven’t been able to pay our taxes this year, so we’ll face an even heavier burden in future,” said the Athens archbishop, who was appointed in August 2014.

Greek banks were forced to close June 29, allowing citizens to withdraw only 60 euros ($66) daily from cash machines, thanks to emergency loans from the European Central Bank.

However, the government insisted July 8 that there was no threat to food and fuel supplies.

On July 1 Pope Francis urged prayers for Greece and its people, saying the country was weathering a “keenly felt human and social crisis.”

Meanwhile, French bishops said July 7 the crisis should encourage “a renewed accounting of conscience on the dual demands of responsibility and solidarity between European partners.”

NEXT: Arriving in Bolivia, pope insists on church’s role in public life