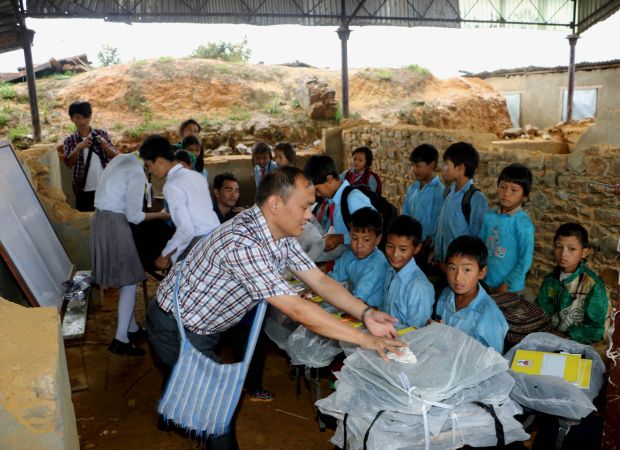 KATHMANDU, Nepal (CNS) — Like thousands of Nepalese homeowners, Sobha Laksmi Maharjan lost her residence in the devastating earthquake that rocked Nepal April 25. But she remains busy and cheerful at work despite the hardship.

That’s because she is busy sewing uniforms for poor children in government-run schools in remote mountain villages. Many of the children lost parents and their household belongings. They attend classes in tents or makeshift centers.

“I feel united with the (earthquake) victims. It is much more than a job,” Maharjan told Catholic News Service as she worked on a sewing machine at the Don Bosco Technical Institute in Thecho, near Kathmandu.

“This is an opportunity to help them. I will bring more of my friends to work here,” said Maharjan, who learned tailoring at the center in 2014. She had been working in a tailoring shop when she accepted an offer from the institute to make uniforms for quake-affected children.

Most of the two dozen young women working in the center have been brought in by former students as the Salesians launched the sewing program following the disaster.

In addition to the uniforms, the Salesians distribute books, school bags and other supplies to students in 40 government schools. The order must receive permission from the government to work in the remote areas.

The magnitude 7.8 earthquake destroyed more than 25,000 classrooms in nearly 8,000 schools. Overall, more than 8,800 people died and nearly 1 million homes were destroyed or damaged.

“After our emergency relief work, we are now focusing on reaching out to the schoolchildren and the youth. That is our charism,” Salesian Father Joji John told CNS July 20 as he showed bundles of cloth imported from China that will become school uniforms.

After a dozen students from the Don Bosco School at Lubu six miles away, arrived at the center, a small truck packed with uniforms and supplies accompanied them to a government school at Chaughare mountain, 20 miles — a two-hour drive — from the center.

When the convoy stopped on the mountain slope, more than 200 students and the teachers greeted the Don Bosco team.

Led by Father Savio Rai, the Don Bosco students, in crisp new uniforms, planned to entertain their peers in the earthquake-damaged school. However, rain was leaking through the roof, causing the performance to be moved into the school’s corridors. Despite the last-minute change in plans, the Chaughare students cheered for the visitors and eagerly accepted the clothing and school supplies.

“We are very happy that they came to meet us with all these things. We want to become like them,” sixth grader Somlal Tamang told CNS of his impression of the Don Bosco visit.

Buddha Bir Thing, vice principal of the government school, was overjoyed by the visit.

“We are grateful to them for visiting and helping us,” he said. “We hope they also help us rebuild the broken classrooms.”

Thing said educating the students has been a challenge since the earthquake and that the government has not yet provided funds to repair the school. Instead, the school’s managing committee is seeking construction assistance, he said.

On the return trip, the Don Bosco group stopped at a government school in Chapagaun, where the Salesians are building a temporary learning center to replace classrooms declared unsafe by government engineers.

After showing the progress on the nearly complete structure, Principal Uddham Khatri pleaded with the Salesians to build a community center so the 94 families in the village can remain together. Their homes were severely damaged in the earthquake and remain unsafe to occupy.

“We will get all the government permission for you. Kindly help us,” Khatri pleaded, showing a plot of land available for such a center.

The Salesians have called for applications to train youth in reconstruction work so they can return to their villages and begin the massive job of rebuilding. But with most quake victims busy with salvaging their belongings and putting up temporary shelters, Father John said, “the response has not been very good.”

Like the Salesians, the Jesuits also are paying special attention to rebuilding schools in communities in the earthquake zone.

“We are reaching out to badly hit school system in the remote areas,” Jesuit Father Samuel Simick, director of the Nepal Jesuit Social Institute, told CNS.

The institute was launched May 19 to coordinate the Jesuit earthquake relief effort.

“We just cannot do what we want or go wherever we want. We need to work in coordination with the government to accompany the most needy quake victims,” Father Simick explained.

The institute has provided nearly 3,000 students with uniforms, bags, books and other items apart from tin sheets for classrooms and furniture.

Amid widespread criticism of a government plan to reduce funding for education to 12 percent of spending in fiscal year 2015-2016 from 13.9 percent in the current year’s budget, Father Simick suggested that “the government is not serious about improving the quality of public education.”

NEXT: City mayors discuss promoting equality and the environment