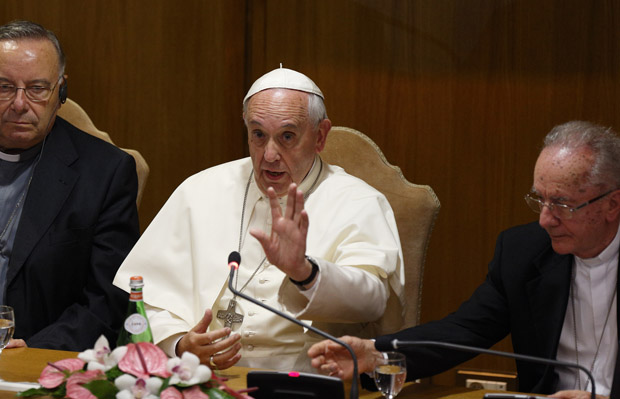 Pope Francis addresses mayors from around the world at a workshop on climate change and human trafficking in the synod hall at the Vatican July 21. Also pictured are Cardinal Francesco Montenegro of Agrigento, Italy, left, and Cardinal Claudio Hummes, former prefect of the Congregation for the Clergy. (CNS photo/Paul Haring)

VATICAN CITY (CNS) — Many of the mayors who met July 21 with Pope Francis stayed at the Vatican for a second day of discussions focused on city planning that promotes economic growth, equality and environmental protection simultaneously.

Jeffrey Sachs, a U.S. economist and head of the Sustainable Development Solutions Network, told the mayors that Pope Francis’ call for “integral human development” matches the United Nations’ definition of sustainable development, which promotes “economic growth that is socially inclusive and environmentally sustainable.”

In such an approach, he said, there is a “triple bottom line: the economic, social and environmental are on a par.”

However, he said, “as Pope Francis constantly reminds us, that is not how the world works today.” Financial profit, the pope has said, seems to be the only goal and that, Sachs said, “doesn’t work for human well-being.”

New York Mayor Bill de Blasio asked the mayors why people are still so committed to outdated models of economic growth when that “model of development is slowly killing us.”

Creating a “sustainable city,” he said, means helping people out of poverty with jobs and affordable housing, but also reducing carbon emissions and other forms of pollution.

Working for change will take courage and will be uncomfortable at times, de Blasio said, but “by setting the high goal, we actually force ourselves day by day to take action related to it.”

All of the mayors from Europe, North and South America, Asia and Africa who spoke July 22 mentioned the growing number of poor people in their cities and the increasing gap between their wealthiest and poorest residents, even in cities like Boston or Vancouver with thriving economies and low unemployment rates.

Sam Liccardo, who has served as mayor of San Jose, California, for just over six months, said his Silicon Valley city is “home to more U.S. patent holders than another city” and that “almost 40 percent of adult residents were born in another country, which is a richness.”

While it is home to some of the world’s biggest and fastest growing companies, San Jose also is home to strong social inequality and an “opportunity gap,” he said. “We live in one valley, but two worlds,” one of multimillion dollar homes and the other of large homeless encampments.

Liccardo said the city is focusing on identifying, housing and providing other services to the most vulnerable homeless residents, rehabilitating old motels and turning them into transitional housing and expanding the construction of affordable homes.

Mayor Gregor Robertson said Vancouver’s goal is to “build a city and an economy that creates opportunity for everyone,” and in many ways, it is working: Vancouver has “the most successful economy of any city in Canada,” he said.

The big growth areas for Vancouver’s economy, he said, are “green jobs” and “creative jobs,” particularly in animation, visual effects and film production. At the same time, he said, because Vancouver is “the warmest city in Canada,” it has a significant homeless population.