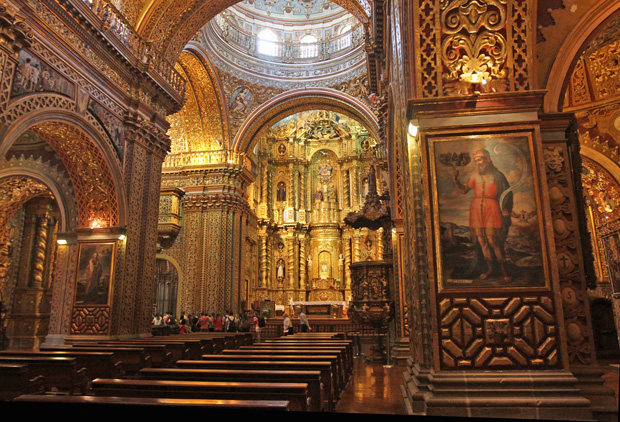 The pope requested private prayer time before the image of Our Lady of Sorrows, which hangs over the altar in Iglesia de la Compania, in Quito's colonial-era Jesuit church. (CNS/Barbara Fraser)

QUITO, Ecuador (CNS) — When Pope Francis enters the Jesuit church here July 7 for a moment of private prayer, he will step into an architectural gem where trees once grew up through the floor.

The Iglesia de la Compania — the Jesuits, or Society of Jesus, are known as the Compania de Jesus in Spanish — is a “Baroque icon” that drew 150,000 visitors last year, architect Diego Santander, who heads the foundation that manages and maintains the building, told Catholic News Service.

Although the church’s interior glows gently with light reflected from floor-to-ceiling gold leaf, “There aren’t tons of gold in the church,” as some have claimed, Santander said.

The gold, which he said weighs a little more than 100 pounds, adorns the elaborately carved altarpiece, the eight-pointed stars on the columns, the intricate side altars and the graceful curves of the ceiling.

The symmetrical building draws on two churches in Rome, taking its cross-shaped layout from the Church of the Gesu, while the side altar carvings of Sts. Francis Xavier and St. Ignatius echo those of the Church of Sant’ Ignazio.

Despite the European influence, several touches — including a sun motif above the main entrance and in the dome — hint at the building’s roots in the New World.

Beneath the main altar lie the relics of St. Mariana of Jesus, and over the altar hangs a miraculous image of Our Lady of Sorrows. 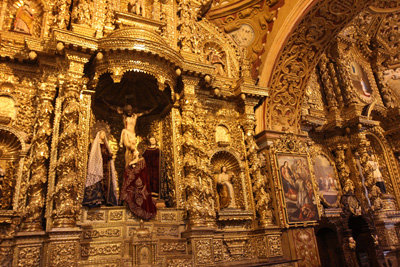 More than 100 pounds of gold leaf adorns the side altars of the Iglesia de la Compania in Quito, Ecuador’s Jesuit church. (CNS/Barbara Fraser)

Begun in 1605, the church was built in stages, starting with a simple structure that was open to the public while the larger building was underway. Italian Brother Marcos Guerra oversaw construction of the main structure from 1620 to 1670, while the carving of the side altars followed in the late 1600s.

The imposing facade of volcanic stone came last and was completed in 1765. Just two years later, however, the Jesuits were expelled from Ecuador and the building began a slow decline.

The Jesuits returned to Ecuador in 1852, but were forced to leave again. When they finally returned in 1862, the decades of neglect had left their mark.

“The inside of the church was like a forest,” with vegetation growing up through the floor, Santander said.

Some of the church’s treasures — including a monstrance and the originals of the huge, graphic paintings of the “Last Judgment” and “Hell,” which hang in the back of the nave — had been spirited away during those years, and an earthquake in 1859 had damaged the bell tower.

At 150 feet tall, the tower was a landmark, with chimes that marked the pace of life in the city, Santander said. After another quake weakened it further in 1868, the tower was reduced to less than half its original height.

Inside the church, beside the carved wooden pulpit, a pillar topped by a statue of St. Mariana of Jesus marks the spot where the young woman used to pray.

Born in 1618, Maria Ana de Paredes Flores Jaramillo was orphaned as a child and led a life of austerity and penitence, with Jesuits as her confessors.

When several earthquakes and a plague struck Quito, the young woman offered her life to stop the disasters. She became ill some time later and died in 1645, at age 27. A lily sprouted in a place where some of her blood spilled, in what is now the Monastery of El Carmen Alto in Quito.

St. Mariana of Jesus was beatified in 1853 and canonized in 1950, five years after the Ecuadorean government proclaimed her a national heroine for her sacrifice.

Between those years, the miracle most closely associated with the church occurred in the adjoining school, where a print of Our Lady of Sorrows, her heart pierced with swords, hung in the dining room. On the evening of April 20, 1906, more than 30 boys, a priest and a brother were in the dining room and saw Our Lady’s eyes open and close, during a period of about 15 minutes.

At the time, the government was taking steps to reduce the Catholic Church’s influence in public education, and the miracle was taken as encouragement to continue efforts to promote education in the faith.

The devotion to Our Lady of the School, as the image became known, began to grow in the mid-20th century. Now one of Ecuador’s major religious devotions, it centers on a novena of prayer around April 20.

The entrance fee paid by tourists supports the $500,000 budget for maintaining and operating the church.

“The greatest work that remains to be done is further research on religious and cultural aspects related to the church,” Santander said.

NEXT: From Argentina, an exodus to see Pope Francis in Paraguay, Bolivia